For the second week in a row Mayo kicked 21 points and picked up two points, but it was a far more difficult assignment than the faced seven days previously against Down.

Westmeath came with a game plan to stifle the Mayo attack, sit deep, soak up the pressure and hit them on the break.

It worked for the most part and it took the leadership of a number of experienced heads to see Mayo over the line after a tough battle in Mullingar.

The midlanders hit the front two minutes in when Luke Loughlin hit the back of the net, the Westmeath corner forward reacted quickest when a Ronan O’Toole effort came back off the post, Loughlin collected the ball, rounded Robert Hennelly and finished low to the back of the net.

Westmeath could have been even further ahead, but John Heslin was finding it hard to get his eye in early pulling two efforts the wrong side of the posts early doors.

Mayo got motoring on the scoreboard when Eoghan McLaughlin looped one over the bar after good build up play involving Michael Plunkett and Conor Loftus.

Heslin found his range seven minutes from a place ball for his sides first point of the afternoon before Paddy Durcan, who put in a big showing all day got the first of his points for Mayo to keep them in touch early doors.

Conor Loftus pointed from range and Cillian O’Connor put over his first of the day to send the teams in all square at the water break on a score of 0-4 to 1-1.

Mayo started the second quarter brightest with Matthew Ruane getting two quick points, his first could have ended up in the net as he broke in along the end line and his second coming from distance to edge Mayo two clear.

Ger Egan pointed a fine score on the right for the hosts, before Loftus landed his second of the day from long range, which was replied to in no time by a Heslin free to leave just one between the teams as the half hour mark approached.

The Lakelanders struck for their second goal from the penalty spot on 30 minutes, Heslin converted from the placed ball after Diarmuid O’Connor was shown a black card for a trip on Ronan Wallace who’d got on the end of a flowing vestment move - that was haunted by the intervention of the Ballintubber man. 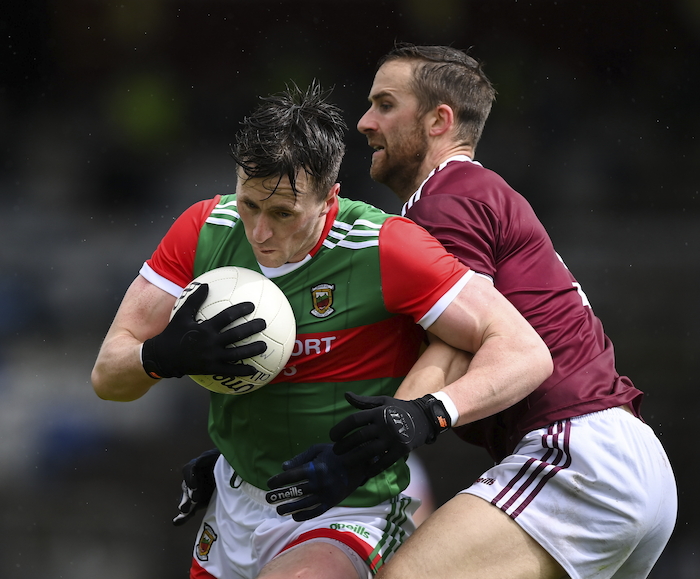 On the move: Cillian O'Connor looks to break free against Westmeath. Photo: Sportsfile

Mayo did responded well with Ryan O’Donoghe pointing from a mark and O’Connor converting a free after Oisin Mullin had been fouled.

But Heslin kicked two frees either side of a Jordan Flynn point that could have ended up in the back of the net - to send in Westmeath in leading 2-5 to 0-11 at the break.

Mayo pulled themselves level not long after there restart when Tommy Conroy pointed, but the hosts edged themselves back in front quickly afterwards when Ronan O’Toole pointed a mark.

Diarmuid O’Connor almost hit the back of the net not long after he retuned to the fray, when he got on the end of the a move involving Matthew Ruane and Loftus but his effort just flew past the target.

A brace of frees from Cillian O’Connor edged Mayo in front by the slimmest of margins before the second water break and it was all to play for heading into the final quarter of the game.

The Ballintubber marksman edged Mayo further clear with another pointed free after there resumption and a Paddy Durcan point following a barreling run had Mayo three clear by the 57th minute.

Westmeath weren’t going away though and a point from Ray Connelleon had them back in the game. Bryan Walsh showed quick thinking to win a mark and then play a quick one two with Ryan O’Donoghue before putting the ball over the bar.

Cillian O’Connor moved the scoreboard further in Mayo’s favour with another pointed placed ball, but Mayo were about to be given a warning Westmeath were intent on staying around in this one.

They worked the ball well down the right flank and it ended up in the hands of Brandon Kelly who shot for goal forcing Hennelly into a fine save. The resulting 45 was pointed by Loughlin who then repeated the trick a minute later to leave the score 0-17 to 2-9 in Mayo’s favour.

Kevin McLoughlin who had come on as a half-time sub kicked a reliving score for Mayo - showing all his leadership and experience.

Heslin pointed from a free to keep his men in touch, before Durcan kept Mayo’s noses in front - but Westmeath kept coming Kieran Martin hit a fine point and Heslin pointed another free to bring the gap back to just a single point.

The game was there to be won and Mayo showed all their experience to do so, Cillian O’Connor got his only point of the day from play from a tough angle after some patient build up play and he rounded off the day with a pointed free to seal the win and the two points for Mayo.