The fixtures for the second round of the Mayo GAA senior and intermediate football championships were confirmed earlier this week.

The second round games in both competitions will take place over the weekend of Saturday, August 24 and Sunday, August 25.

In the senior championship in group one Bohola Moy Davitts will host Davitts on Saturday, August 24 at 6.30pm while Breaffy and Kiltane will meet the following day at 3pm in Breaffy.

Both games in group two will take place on the Saturday evening with Ballina Stephenites hosting Aghamore at 5pm and Westport welcoming Castlebar Mitchels at 6pm.

The games in group three will be spread out over both days with the action on Saturday seeing Ballintubber host Knockmore at 4pm and Garrymore and Hollymount-Carramore facing off in a south Mayo derby at 1pm on the Sunday.

The action in group four will get underway with another local derby when Charlestown host Ballaghaderreen at 5pm on the Saturday evening with Claremorris welcoming Belmullet on Sunday at 3pm. 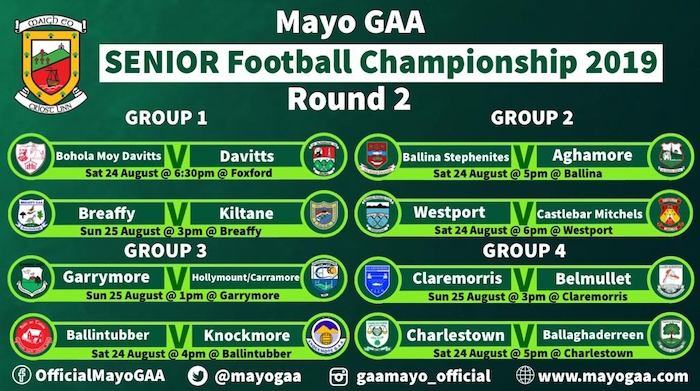 In the intermediate championship Crossmolina Deel Rovers will have their first home game at this grade for many years after being relegated from the senior championship last year when fellow north Mayo men Ardanree Sarsfields on Saturday at 6.30pm. The other game in that group will take place at 5pm in east Mayo when Bonniconlon travel to Swinford.

Sunday will see all of the action in group two take place – last years junior champions Balla will be at home to fellow west Mayo men Parke-Kellogues-Crimlin at 1pm, while at the same time Burrishoole will be at home to Islandeady.

In group three Mayo Gaels and Ballinrobe will clash in Mayo Abbey on the Saturday evening at 6.30pm – the other game in the group also takes place on the Saturday where Ballyhaunis will host The Neale at 5pm.

Kiltimagh and Lahardane will get things underway in group four at 6.30pm, with Louisburgh hosting Shrule-Glencorrib on Sunday afternoon at 3pm. 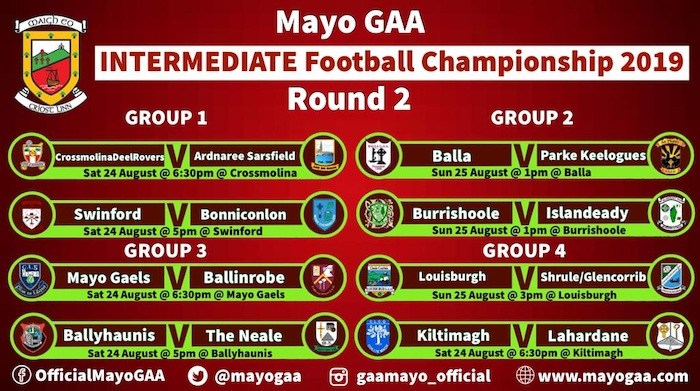 The draw has also taken place for the junior championship quarter-finals during a recent Mayo GAA CCC meeting.

In the junior A last eight, Kilmeena will face Cill Chomain and Castlebar Mitchels B are going up against Kilmovee Shamrocks. With group two still to be finished in the championship the draw has pitted Ballintubber B against the winners of group two and Kilmaine against the runners up in that group. In the relegation play-offs Ballina Stephenites B will take on Charlestown B and Killala have been pitted against the side that ends up in last place in group two when it concludes.

In the junior B championship the dates and times for the quarter-finals have also been set along with the fixtures for the next round. Moygownagh and Claremorris B will meet in Knockmore at 6pm on Saturday, August 31, Eastern Gaels and Ardnaree B are down to square off at 6pm in Charlestown on the same day. That game will be preceded by the meeting of Breaffy B and Kiltimagh B, while the final quarter final will take place at 6pm on the same day in Parke when Davitts B and Crossmolina Deel Rovers B will clash.

The relegation play-offs in the grade also take place on Saturday, August 31 – Aghamore B and Lacken will play in Ardnaree at 6pm and at the same time Hollymount-Carramore B and Moy Davitts B will face off in Ballyhaunis.

The following day, Sunday, September 1 will be junior C quarter-final day with all games to throw in at 12pm. Balla B and Kiltane B will meet in Bonniconlon , Burrishoole B and Mayo Gaels B are down to play in Islandeady, Parke-Keelogues-Crimilin B and Garrymore B will meet in Balla and Belmullet B and Westport C have been fixed to meet in Crossmolina.