The Mayo u20s were looking to be the thrid Mayo side to defeat Galway in championship action inside of five days in Tuam Stadium on Wednesday night.

After destroying Sligo in the semi-final the week previously in Castlebar – Michael Solan’s charges were trying to defend the title won by the graduating class last year, which went all the way to the All Ireland final of the competition last year – ultimately being defeated by Kildare in Croke Park.

Standing in their way were a fancied Galway side under the guidance of Galway legend Padraic Joyce, who overcame Roscmmon in their semi-final to set up this most traditional Connacht final.

Galway were the ones smiling at the end of powerful and hard working performance where they hassled and harried Mayo from pillar to post and didn’t give them a minute to breath – then when the chances presented themselves the were far more clinical than Mayo, taking a number of scores in style.

Padraic Joyce’s side were led by storming performances from the likes of Liam Costello and Darragh Silke who caused Mayo problems from the get go. 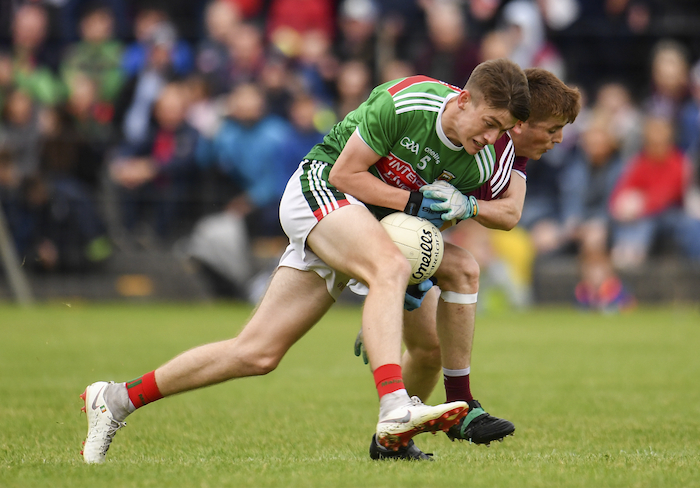 On the run: Aaron McDonnell on the run for Mayo against Galway. Photo: Sportsfile

Mayo started the game with purpose and pushed themselves two points clear inside the opening three minutes with Evan O’Brien pointing a free from the left after Tommy Conroy was fouled and The Neale man registered his sides second point after a tricky run a minute later.

Galway burst back into the game with Liam Costello who was a late addition to the starting line up taking advantage of Paddy Goldrick getting caught in possession in the middle of the park.

Costello ended up picking up the man of the match award for an all action display covering practically every inch of ground over the course of the hour.

Rory Cunningham levelled the game up six minutes in after he was found by a quick free from Darragh Silke – who was a buzzing influence throughout the first half linking play and setting Galway in motion.

Mayo missed a few chances to go back in front with Aiden Orme, Stephen McGreal and Evan O’Brien pulling frees from scroable positions wide of the post and Galway then punishing Mayo mistakes on the scoreboard.

Costello got his second of the day when Jack Coyne tried to chip the ball up to himself only to send it into the hands of a Galway player who set Costello away.

The Tribesmen had a chance to rattle home the first goal of the day when Rory Cunningham’s effort at a point bounced back off the post and into th arms of Ben O’Connell but his effort was saved by Jamie McNichoals and away to safety by the Mayo defence.

Galway did register their fourth point of the day not long after when Darragh Silke pointed a close range free and from the resulting kick-out McNichoals misqued his lines and kicked it srtaight into Matthew Tierney’s hands and he fed Costello who kicked his third of the day.

Tommy Conroy got some badly needed respite for Mayo pointing from close range after being found in space by John Gallagher. That respite didn’t last too long as Conor Newell kicked a point just seconds after coming on after being played in by Costello – Galway didn’t hang around with Padraig Costello landing a fine score from out on the right to put Galway 0-7 to 0-3 ahead.

It was vital that Mayo got the next score to keep their finger in the contest and they did through Paul Towey who landed a point from downtown. Mayo looked to press on but it was Galway who drove the game on on the scoreboard before the break.

Darragh Slike pointed two frees then the Corofin man hit a score that got the home faithful to their feet in the old stand after Galway turned over Mayo yet again and broke with pace before Silke hit a great score on the run to send his side in leading 0-10 to 0-4 at the short whistle. 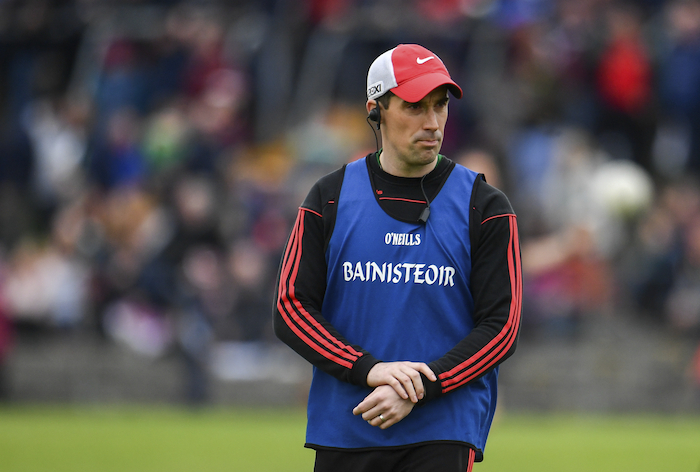 Galway picked up where they left off at the start of the second half with Rory Cunningham poniting inside 20 seconds of the restart, that was followed by points from a Padaig Costello free and billiantly worked score from Liam Costello after Darragh Silke did extremely well to hold on to a pass.

Mayo did manage to get the scoreboard ticking in their favour five minutes in when Evan O’Brien pointed a free but the were still trailing by 0-5 to 0-13 and had a mountain to climb. Tommy Conroy swung over another not long after to give Mayo some hope, but it was only every going to be a faint one of reeling in Galway’s lead.

To their credit Mayo kept plugging away, Conroy pointed from play then Paul Towey slotted one over from a tight angle, Evan O’Brien launched over two frees and Towey added another score to bring it back to a five point game with three minutues left and injury time to come.

But it wasn’t to be as Galway were able to see out the clock and Mayo left their efforts to peg it back too late and they exited the championship at the Connacht final stage with Matthew Tierney having the last say on the the evening pointing a free to give Galway a deserved six point victory.