If Mayo are to make their way through the back roads and byways of the qualifiers and through the Super Eights and on to an All Ireland semi-final and then final - they will have to navigate eight games in 71 days.

Things will get going in round two of the qualifiers on Saturday, June 22, when Mayo will face the winners of one of these eight games: Louth v Antrim, Tipperary v Down, Leitrim v Wicklow, Wexford v Derry, Offaly v London, Monaghan v Fermanagh, Carlow v Longford or Westmeath v Waterford.

The odds say that Mayo will be on the road to a lower division team in round two, if they get through that round they will be back in the hat with the winners of those round two games, before they meet a beaten provincial finalist and then the Super Eights - and after that, who knows.

After not being in the qualifier series since their 2010 first round loss to Longford, Mayo have been in the qualifiers in the past three years and this year will make it the fourth year in a row. 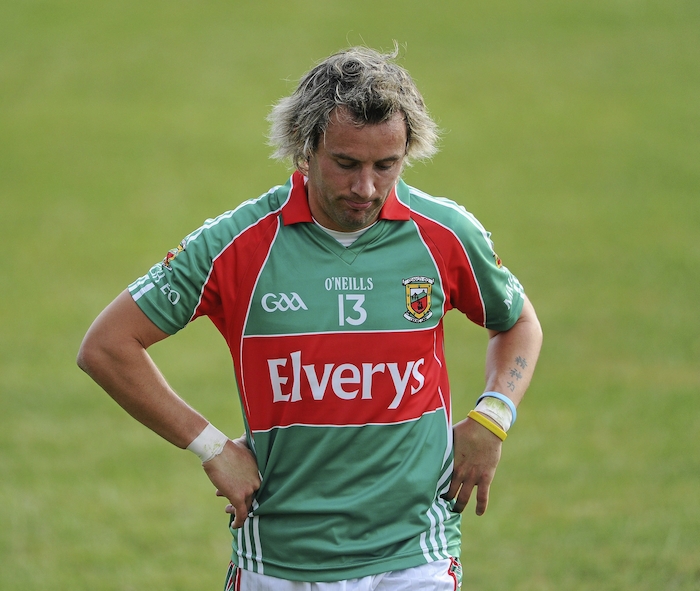 Down and out: Conor Mortimer reflects at full time after Mayo were eliminated from the qualifiers by Longford in 2010. Photo: Sportsfile

2001: Mayo were beaten by Roscommon 2-10 to 1-12 in the Connacht Final by Roscommon in Hyde Park, they followed that up by facing Westmeath in round four of the qualifiers in the same venue - where the Lake County beat Mayo 1-14 to 0-16.

2003: For the second year in a row Galway sent Mayo packing from the Connacht Championship, this time at the final stage, winning 1-14 to 0-13 in Pearse Stadium. Mayo faced Fermanagh in their next game in round four of the qualifiers in Markievicz Park in Sligo and the Erne men saw off John Maughan's men 0-12 to 1-8.

2005: Having reached the All Ireland final the year before, Mayo lost to Galway in the provincial final in Pearse Stadium with Galway winning 0-10 to 0-8. That saw Mayo enter the back door in round four where they dispatched Cavan by 0-11 to 0-8 in Hyde Park.

2007: The year before saw Mayo reach the All Ireland final again, only to see Kerry beat them once more. Galway once again sent Mayo out of the provincial championship, this time at the preliminary round/quarter final stage with a 2-10 to 0-9 win in Pearse Stadium. Cavan once again were the opponents in Mayo's first game in the qualifiers and Mayo won 1-19 to 3-7 in Castlebar.

2008: Mayo made it back to the provincial final after going out early the year before but Galway once again got the better of Mayo running out 2-12 to 1-14 winner in Castlebar. Tyrone were up next for Mayo in round four and on their way to their third All Ireland title in five years. They saw off Mayo 0-13 to 1-9 in Croke Park.

2010: Sligo dumped Mayo out of the Connacht Championship in a surprise victory in Markievicz Park, seeing off Mayo 0-15 to 1-8. Mayo's year went from bad to worse when they were then unceremoniously beaten by Longford on a score of 1-12 to 0-14 in the midlands, bringing John O'Mahnoy's tenure as Mayo manager to an end.

2016: After winning five Connacht titles on the bounce from 2011 to 2015, Mayo's nemesis, Galway, once again sent them out of the Connacht championship in Castlebar at the semi-final stage, winning 1-12 to 0-12. Fermanagh came calling in round two of the qualifiers with Mayo winning 2-14 to 1-12.

2017: Galway backed up their win the year before by beating Mayo again in the Connacht semi-final, this time in Galway, winning 0-15 to 1-11. Derry made the trip to Castlebar and very nearly ended Mayo's summer, with extra-time needed to see off the Oak Leaf county 2-21 to 1-13.

2018: Three in a row for Galway against Mayo with Kevin Walsh's men winning 1-12 to 0-12 in MacHale Park in the quarter-final/preliminary round. Mayo went into the qualifiers in round one and made the trip to the Gaelic Grounds, where they dispatched the Treaty men with ease on a score of 5-19 to 3-7.