At the end of the first full day of counting in the local elections in Mayo one third of the seats were filled, with the final seats of the day coming in the early hours of Sunday morning when the results were declared in the Castlebar Local Electoral Area.

At the end of the days counting Fianna Fail had seven seats, Fine Gael five, Sinn Fein one and independents five.

The honour of being the first person elected in the county fell to Sinn Fein Cllr Gerry Murray who topped the poll in the newly reconstructed Swinford Local Electoral Area.

Murray was elected for the fifth time in a row taking 1896 first preference votes and went over the quota of 1634. The numbers spat out by the count result pointed out the direction of the other three seats with Fianna Fail’s Michael Smyth taking 1631, Fine Gael’ Neil Crusie 1511 and Fianna Fail’s, John Caulfield taking 1296.

That left Fine Gael’s Tom Lavin the odd man out despite taking 1130 number one votes - with Caulfiled, Cruise and Smyth elected on the third count.

Fianna Fail win on the double in Belmullet 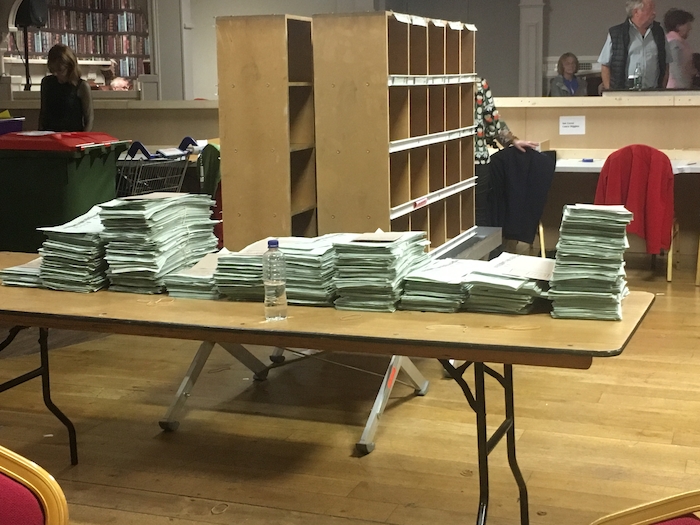 From early morning on Saturday the tally figures showed that the Belmullet Local Electoral Area was only going to go one way.

With three seats to be filled and six candidates the actual process of getting through the count was going to be a simple enough one.

The area was hived off from Westport this time and with three sitting councillors going and one strong challenger it looked like it would be a battle for the last seat in the lead up.

In the end when the first count was over it was only ever going to go one way, with Fine Gael’s Gerry Coyle topping the poll with 1806 votes and beating the quota of 1770 . Not far behind him was the Fianna Fail duo of Paul McNamara (1696 ) and Sean Carey (1604 ) .

That spelt bad news for sitting Sinn Fein Cllr Teresa Whelan who got 1092 number ones and put her out of the running to hold onto the seat she was co-opted onto to replace Senator Rose Conway Walsh when she was elected to the Seannad .

Fine Gael’s Breege Grealis and independent Jay Heneghan were eliminated on the first count and when their votes were handed out Carey and McNamara went over the top.

Kilcoyne splits the difference between the big two

Shortly before 4am on Sunday morning the ring bell rang for the the end of the 13th and final count in the Castlebar Local Electoral Area.

Standing tall at the end of the battle was the two big parties who took three seats each, with independent councillor Michael Kilcoyne flying the the flag for the rest.

It did look for a time in the early hours of the morning that the breaks might fall the way of another independent, when a steady stream of transfers brought Harry Barrett back into the fray after looking out of early on.

By the time the eleventh county had been called just nine votes separated him from Fine Gael’s Donna Sheridan and Fianna Fail’s sitting councillor Martin McLoughlin just 46 ahead of him.

However when it came to the crunch, party loyalty and geography went against him when the distribution of the 990 votes of Fine Gael’s Eugene McCormack was sorted out. Sheridan picked up 202 of her running mates votes, with McLoughlin getting 143 compared to Barrets 84 and that was the ball game.

The count continued because Fine Gael’s Ger Deere was elected on that count and beat the quota with enough votes if they almost all broke Barrett’s way to keep him in the race, but it was never going to happen.

Earlier in the day both Independent councillor Michael Kilcoyne topped the poll getting 2598 first preference votes, joining him in beating the quota of 1731 on the first count was Fianna Fail’s Cllr Blackie Gavin 1779.

Next over the line was longstanding Fianna Fail Cllr Al McDonnell who past the post on the eighth count. Deere came in on count number 12 - with Fine Gael’s Cyril Burke being elected alongside McLoughlin and Sheridan without reaching the quota.

First time candidate Sheridan’s performance is one of the talking points of the weekend, the relative newcomer to politics got 804 number ones and that set her up in poll position to take the seat she eventually won in the small hours of the morning.

Another talking point from the count was the collapse of the Sinn Fein vote with sitting councillor Joe McHale getting 602 first preferences this time around compared to the 1375 that Therese Ruane got five years.