Breaffy booked their spot in the Mayo GAA SFC final with a three point win over Ballaghaderreen, but the question of who will be joining them still has to be resolved after Castlebar Mitchels and Ballintubber played out a thrilling draw in the other semi-final.

Breaffy booked their passage back into the Mayo GAA Senior Football Championship final for the first time in three years with a three point win over Ballaghaderreen on Saturday night.

The west Mayo men for the most part held their opponents at arms length throughout the game, but a late Kuba Callaghan goal made for a nervous closing few minutes for the victors.

They raced into an early 0-3 to 0-1 lead inside the opening three minutes with points coming from frees off the boots of Conor O’Shea and Tommy O’Reilly and one from Aidan O’Shea.

The battle between Mayo teammates O’Shea and David Drake was on of the key factors in the game, with Breaffy deploying their star man in the full forward line and Drake following his every move in there.

Ballagh’ got the scoreboard moving in their favour with a point from Barry Regan four minutes in, but that was matched almost instantly from another O’Reilly point after Aidan O’Shea had done the hard work in the build up.

Luke O’Grady and Conor O’Shea then swapped points to leave Breaffy 0-5 to 0-2 in front eight minutes in. The east Mayo side landed the nest two points through Regan and Andy Moran leave the gap at just a single point around the quarter of an hour mark, but the next score was to be the vital one in the game.

Matthew Ruane who put in a storming performance all day drove the ball in on top of Aidan O’Shea and Drake. The ball was over cooked for the intended target and the Ballagh’ defence switched off failing to notice Gareth Dunne ghosting in behind everyone else and he fisted the ball past Patrick Sharkey from close range to put Breaffy 1-5 to 0-4 up.

Conor O’Shea tagged on another point not long after and the gap was five between the sides, Robbie Fadden should have pushed it out even more after he broke through the cover but his effort came back off the post.

Breaffy did go six clear through another O’Reilly point on 24 minutes after some fine build up play, but Ballaghderreen kicked the final two points of the half to leave just four between them and all to play for in the second half.

The west Mayo men remained on top in the second half and with five minutes of normal time to go they let 1-13 to 0-10 with O’Reilly kicking three points, Conor O’Shea, Matthew Ruane and Seamus O’Shea one each with Cormac Doohan, Andy Moran, Ryan Lynch and Barry Regan responding for Paul McHugh’s side with their own minors.

While it looked like Breaffy were going to cruise home to victory, Callaghan’s goal ensured that it was going to go right down to the wire - with Ballagh’ bombarding the Breaffy area with long balls in the final remaining few minutes as they tried to create the goal chance they needed, but they were unable to so and the west Mayo men march back into the final.

Nothing to separate sides after Saturday night thriller 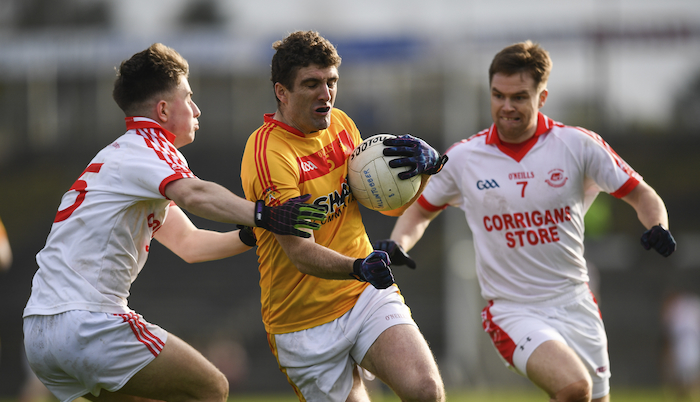 This was a game for the ages, that had a bit of everything in it. Some brilliant scores, some woeful misses, end-to-end action, one side having to play the game with just 14 for the vast majority of it and then even more drama in extra time.

Both sides will feel they had the chances to win it, rather than have to come back and do it all again next weekend, but anyone who was in MacHale Park on Saturday night will be quite happy to see more of the same.

Diarmuid O’Connor, put in a stunning shift for his side - marauding up and down the park all night in impressive style.

But Mitchels will be happy knowing that having gone down to 14 men mid-way through the first half they were able to still go toe to toe with their fierce rivals and despite not holding on to the lead twice late on they are still alive and well in the competition.

Ballintubber led 1-3 to 0-5 at the break with the goal coming from Michael Plunkett mid-way through the half. Ballintubber kicked plenty of wides in the opening half too that they looked like they might live to regret come the end.

Mitchels kicked off the second half in style with Ray O’Malley hammering home his sides goal just three minutes in and Mitchels went on to add another four points to Ballintubber’s three over the next 15 minutes to lead 1-9 to 1-6 - but Ballintubber battled on and a point from Ciaran Gavin cut the gap to two.

As the game drifted into injury time Castlebar had a great chance to seal the win, but between them Eoghan O’Reilly and Donal Vaughan managed to butcher a great chance of a goal.

Cillian O’Connor swung over a pointed free on 62 minutes and two minutes later he had the task of doing it again after Alan Dillon tempted Ger McDonagh into making a challenge and drawing a foul that the Mayo captain made no mistake from, sending the game into extra time.

There was just the one score in the opening half of extra time and that came from Jamsie Finnerty just before the short whistle to send the ‘Tubber in leading by one at the turn-around. That lead was doubled just after the restart when Myles Kelly tapped over a point.

But showing the champions they are Mitchels hit back with three points on the bounce from Neil Douglas, Barry Moran and Anthony O’Boyle to go one clear with five minutes to go.

A minute later O’Connor kicked his eighth and final point of the night to level it up at 1-12 each and make sure we all have to come back again next weekend for another go at it.