The rain fell at a steady drizzle from the early hours of the morning, but that did not put off the thousands of pilgrims who made their way to Knock Shrine to greet Pope Francis.

The World Meeting of Families had seen the first papal visit to the country since 1979 and the pontiffs visit to the national shrine was earmarked as one of the highlights of his visit.

While the rain did put off some with empty seats visible at the back of the front section of the crowd, thousands still made their way to the small east Mayo village to see the Pontiff.

The pontiff touched down at Ireland West Airport Knock where he was greeted by dignitaries including Archbishop Neary before he departed the airport to travel to Knock Shrine.

His arrival at the airport was broadcast on big screens in the shrine which was greeted with warm applause by the pilgrims who had braved the wet weather - that had spilled from the heavens all morning, before his arrival.

When he arrived at the shrine he toured the crowd in the Popemobile before he entered the Apparition Chapel, where he spent time in silent prayer, during his prayer he sat on a chair specially made for the event which was made as an artistic representation of a family chair. 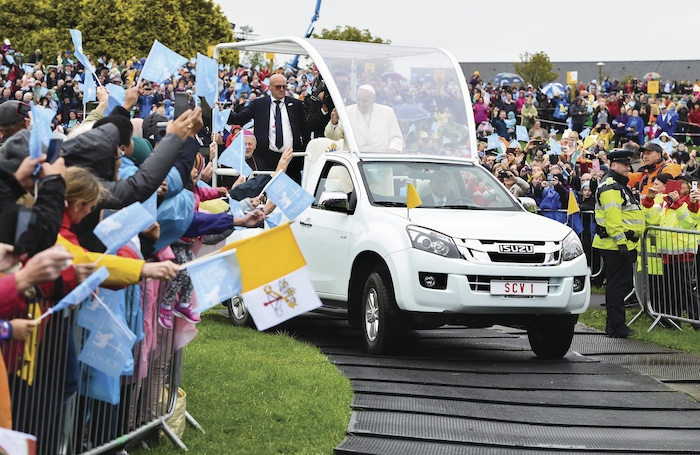 Pope Francis greets the crowds from the Popemobile in Knock. Photo: Maxwells on behalf of WMOF

He also lit a candle after receiving a taper from two children from Knock parish, Sean Burke and Molly Hunt who were dressed in period costume to represent the two youngest witness to the apparition John Curry and Catherine Murray.

He exited the chapel and proceeded to the stage joined by Archbishop Neary and Fr Richard Gibbons, where he gave a address to the crowd in Italian - which was translated into english on the screens for the pilgrims.

Speaking to the pilgrims he said that: “None of us can fail to be moved by the stories of young people who suffered abuse, were robbed of their innocence and left scarred by painful memories.

“This open wound challenges us to be firm and decisive in the pursuit of truth and justice,” he said.

“I beg the Lord’s forgiveness for these sins and for the scandal and betrayal felt by so may others in God’s family,” he said.

“I ask our Blessed Mother to intercede for the healing of the survivors and to confirm every member of our Christian family in the resolve never again to permit these situations to occur,”

He said that in his prayers at the Apparition Chapel a short time before “I presented to her in particular all the victims of abuse of whatever kind committed by members of the Church in Ireland.” 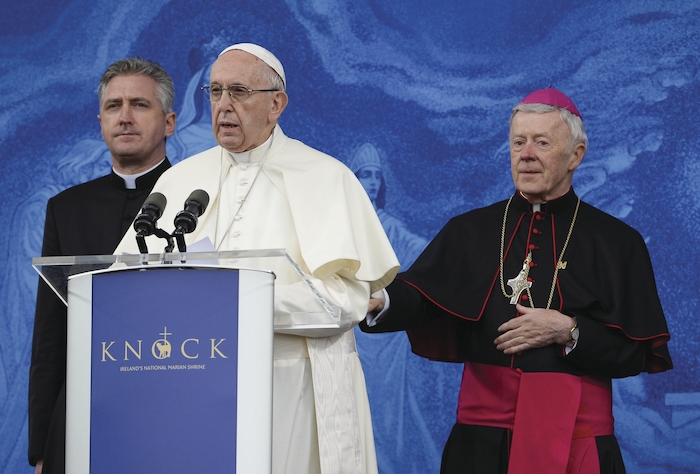 Pope Francis with Fr Richard Gibbons and Archbishop Neary as he addresses he crowds in Knock. Photo: Maxwells on behalf of WMOF

He then led the crowd in the Angelus prayer, before an exchange of gifts which saw him presented with a replica of Our Lady of Knock as featured in the Mosaic in the Apparition Basicilca.

Afterwards he departed for Ireland West Airport Knock from where he flew back to Dublin to conclude the final part of his visit to Ireland.