Mayo were mere inches away from forcing extra time in Croke Park, but Ryan O’Donoghue’s last gasp close range free was deflected up and over the bar by a Kildare hand and with it went Mayo’s hopes on Jones Road.

Mayo looked to be down and out only a mere quarter of an hour earlier when Kildare’s main man Jimmy Hyland slotted over his ninth point of the day to put Davy Byrne’s side six clear and looking to be home and hosed.

But Mayo weren’t going to bend the knee that easily and they kept plugging away and trying to reel in their opponents lead.

Eight minutes from time Ross Egan cut the gap to five from a placed ball, four minutes later the Aghamore man had a glorious chance to rattle the back of the net when he was played clean through on goal - but Aaron O’Neill pulled off a brilliant save to deny him.

Patrick O’Malley came up from his goal to kick the resulting 45 and cut the gap to just four and the game was still live, a minute later Egan tapped over another free and there was just a goal between them and Kildare were starting to live on their nerves.

But Mayo were dealt two killer blows as the game slipped into injury time, Hyland kicked his tenth of the day to push the gap back out to four and Mayo were reduced to 14 men when Jordan Flynn was shown the line and the Crossmolina Deel Rovers man looked to have laid his hands on the referee in the incident.

Mayo kept coming and O’Donoghue pulled it back to three points with the four minutes of the announced injury time elapsed, but the referee played on and Mayo generated their last gaps chance - but it wasn’t to be for Michael Solan’s men. 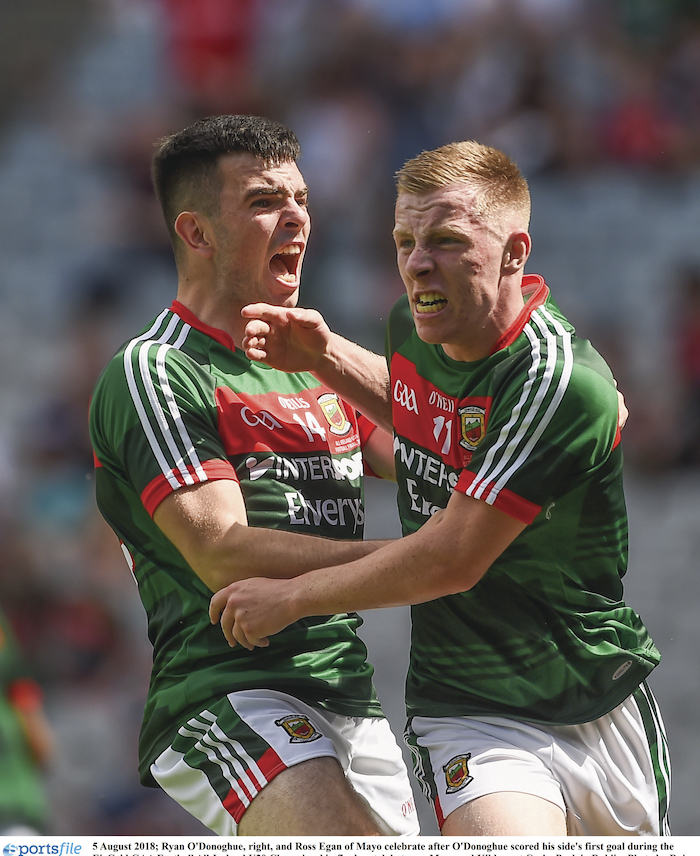 Kildare went in leading by 1-13 to 1-9 at the break after half an hour of free flowing football.

The Kildare full forward line of Jimmy Hyland, Brian McLoughlin and Paddy Woodgate helped themselves to 1-9 of their sides total, while Mayo’s full forward Ross Egan kept his side in touch with five points from frees.

The opening half hour saw 24 scores and just three wides hit as both sides decided that attack was the best form of defence and ran at each other from the get go.

Kildare opened the scoring inside the first minute with Aaron Masterson hammering the ball over the bar after good work in the corner by Hyland.

Mayo responded though a Colm Moran point after Conor Diskin and Nathan Moran did well in the build up. McLoughlin and Egan swapped frees over the next few minutes, before the first goal of the game arrives seven minutes in.

McLoughlin got himself isolated inside on his man and Stephen Comerford picked him out with a great ball and the Clane man finished low past Patrick O’Malley in the Mayo goal.

Jimmy Hyland tagged on two great scores inside the next two minutes as the Mayo defence started to look in trouble and they were dealt a major blow when Johnny Maughan was forced off with an injury before the ten minute mark.

Mayo cut the gap back to three points after scores from Egan and Colm Moran by the 12 minute mark, but Kildare kept coming and over the next six minutes they kicked five points to Mayo’s one to lead 1-9 to 0-5. 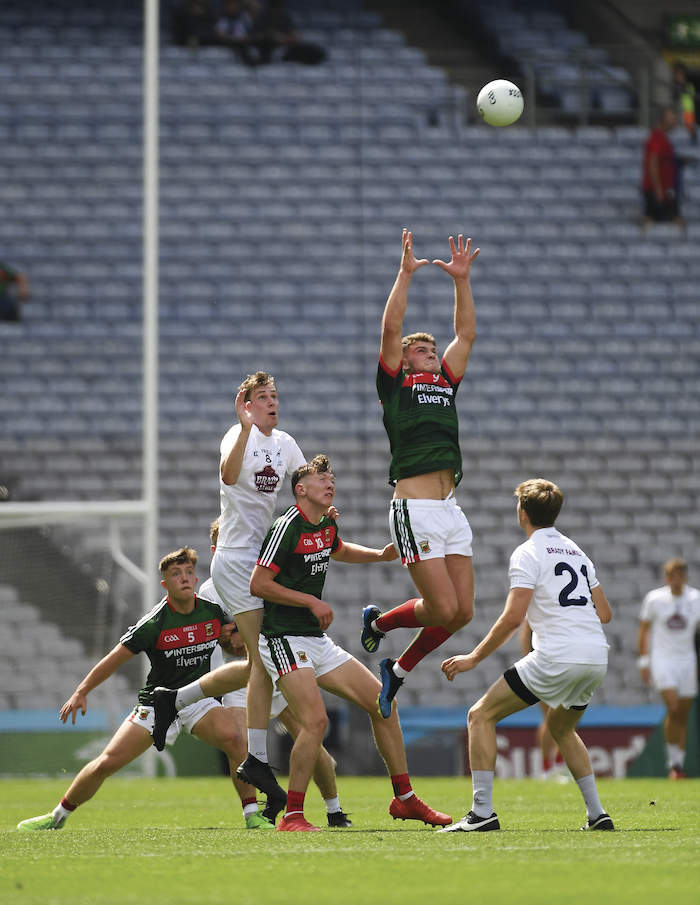 Up in the air: Mayo and Kildare battle for the ball in the middle of the park. Photo: Sportsfile

The Westerns stemmed the tide through a brace of Egan frees with Padraig Walsh responding for the Lillywhites.

Mayo rattled their first major eight minutes before the break when Ryan O’Donoghue broke from the 40m line and sold a great dummy before driving the ball to the corner of the net to live three between the sides on a score of 1-10 to 1-7 in favour of the Leinster champions.

Hyland tagged on three more excellent points for his side before the break with Mayo keeping in touch thanks to a points from Evan O’Brien and Egan to leave Kildare four to the good at the turnaround.

Mayo started the second half very brightly with Conor Diskin and Colm Moran landing points inside the first three minutes to cut the gap back to just two points, but Hyland once again came to the fore and rolled off four points over the next 15 minutes to put his side six clear and looking home and hosed.