THE ANCIENT saga of Diarmuid and Grainne gets a zestful makeover from Fíbín Theatre Company in an entertaining Town Hall staging of Tóraíocht that is a leap-off for a national tour –rather like the cross-country epic of the play’s hero and heroine.

Scripted by Philip Doherty and directed by Mikel Murfi, this is a rollicking romp through Irish myth that sucks in influences from Monty Python and Martin McDonagh as it zaps irreverent yet re-animating volts through the staid schoolbook version of the mythic classic.

Sabine Dargent’s striking set presents what looks like upturned white lacework trees to overhang a playing area where the six actors, taking multiple roles and, aided by Matt Guinnane’s brilliant masks, enact wooings and seductions, hurling matches and battles, chases and escapes, loyalty and treachery as the tale unfolds and races to its conclusion.

Doherty’s script has momentum and imagination, which Mikel Murfi’s direction matches in the pacy rendering wherein his excellent cast flourish. Admittedly there were elements that did not work. When Diarmuid finally yields to Grainne the climactic union was represented by the actress doing a solo aerial silk circus routine. Surely a romantic two-hander choreography would have been better? Finn McCool, the vengeful pursuer, is represented by a voiceover throughout and, again, I feel there are points in the story where his presence onstage would have been preferable. Similarly, Diarmuid’s clashes with an evil giant and some ship’s captains from Isle of Wight were both derivatively Pythonesque. 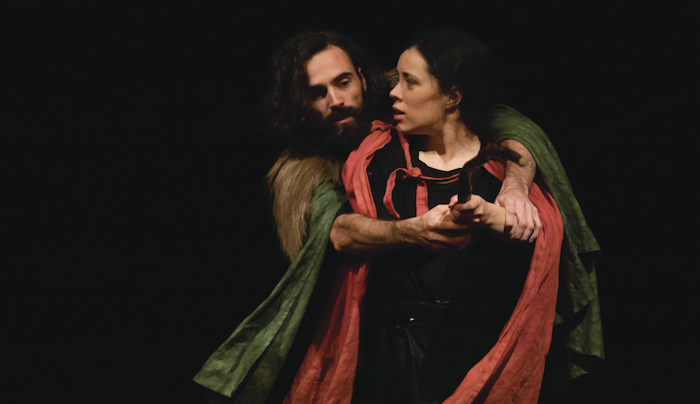 Those quibbles aside, this is a show that delivered lots of laughs and delights through its 90 minutes. Sean O’Meallaigh [pictured above with Kate Finnegan] was a suitably charismatic Diarmuid and the quintet of actresses, who shared the Deirdre role among many others, also are worthy of plaudits a-plenty; Gráinne Bleasdale, Liz Fitzgibbon, Fionnuala Gygax, Méabh Ní Chualain, and the aforementioned Finnegan.