THE BLACK Box was packed to the seams on Tuesday evening for the premiere of Enda Walsh’s adaptation of Max Porter’s Grief is the Thing With Feathers, staged by Complicité and Wayward Productions in association with Landmark Productions and Galway International Arts Festival.

In Porter’s much-acclaimed 2015 novel, two young boys are trying to deal with the shock of their mother’s sudden death, as is their father who is a Ted Hughes scholar. Then, into their lives comes Crow, the trickster protagonist of Hughes’ most famous poetry collection. This other-worldly bird is drawn to the grieving family and declares he will stay until they no longer need him. There ensues much chaos and anarchy as Crow’s brand of grief therapy is of a type would appall the Medical Council. Yet his unruly presence in the family’s life does get them through the raw pain of their bereavement to the point where they are able to move on. 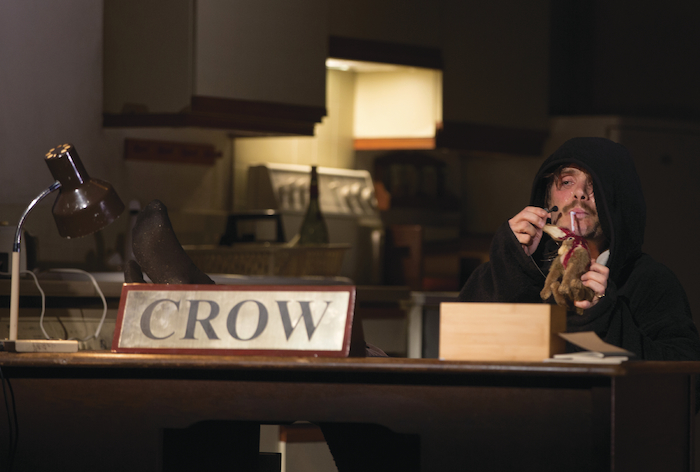 In Walsh’s adaptation Cillian Murphy plays both the father and Crow, the idea being that the father is haunted or possessed by Hughes’s totem animal and it is a concept that works superbly. Looking frayed and dishevelled in a black dressing gown, Murphy transforms from grief-stricken dad to Crow by flicking up his gown’s hood and speaking through a microphone in a deeper, plummier register. With his black garb the effect can sometimes be a bit like Darth Vader voiced by Oliver Reed but Murphy infuses both personae with great vitality and depth. The emotional range he covers in his performance is quite something, from the boisterous antics and utterances of Crow to the heart-rending vulnerability of the Dad as he struggles to adapt to his family’s shattered world.

It is a further testament to Murphy’s bravura performance that he holds his own amid the array of sound and vision effects that course through the production. The set wall becomes a large canvas where chapter headings and blocks of text appear, where letters spill like rain or are obliterated by surges and swathes of black. Drawings of a crow story by Jamie Vartan and TV and photo images also feature amid the play’s visual palette. 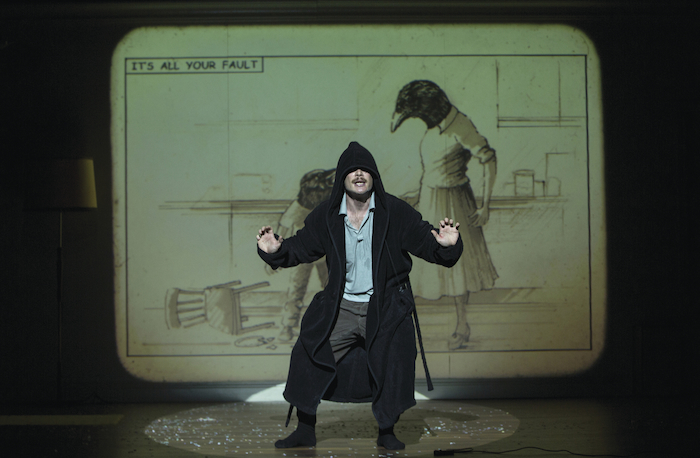 Teardo’s throbbing score and Silverman’s dramatic lighting further add to the ‘full on’ sensory impact of the production. Admittedly there were moments where Crow’s lines were not distinct because of their amplified delivery – Crow’s description of defeating a demon was one such instance. Nonetheless, Walsh and his collaborators (including Taighen O’Callaghan and David Evans as the two young boys ) combine to deliver a high octane theatrical experience which continues at the Black Box until Saturday.