Harry’s at Water Lane opened in December and is already building a reputation as one of the best places to watch live sports in Galway city. The Bohermore bar can show three different sporting events at the same time, so it’s no wonder Harry’s is proving so popular.

Harry’s at Water Lane have set up their newly opened bar with sports fans in mind. Geoff Kinsella, co-owner of the business explains, “We have three separate big screen TVs, each with its own satellite signal and sound system. The sound systems operate independently in the different areas of the bar, so three different sporting events can be shown at the same time without interfering with one another”.

Many sports fans follow numerous sports and might enjoy rugby, soccer and GAA. “We have had an electric atmosphere in the bar during the recent six nations rugby matches and were voted the best place to watch rugby in Galway by Galway Daily. We were delighted with the accolade, especially as we are so new”, said Steve Harris, co-owner. “This new Bohermore bar has all the hallmarks of a great sports pub, with a large back room and multiple screens (not to mention their tasty and affordable wings ). Just a few minutes’ walk from Eyre Square, it’s both comfortable and capacious.” Galway Daily

Harry’s at Water Lane is really gearing up for this weekend of sport, starting with Liverpool Vs Manchester United on Saturday morning, followed by Ireland Vs Scotland and France Vs England in the Six Nations. Harry’s will be ready for sports fans, offering excellent service, a delicious brunch from 11am and their BBQ and burger menu available till 10pm. What’s really appealing is the service, who doesn’t love table service during a match? No need to queue up for your drinks, they will be delivered to your table. How awesome is that? 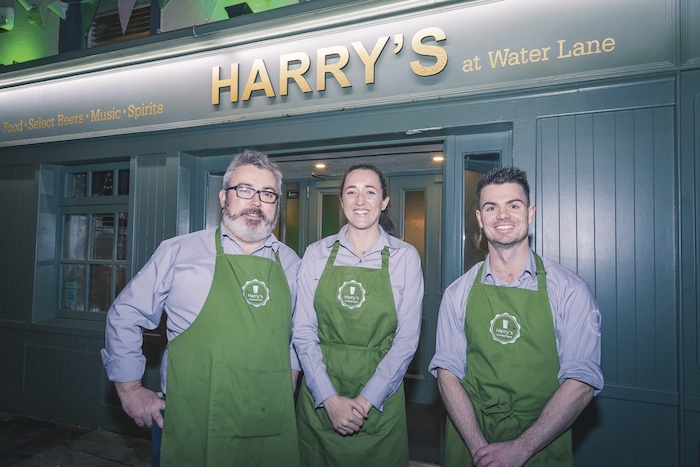