With less than two weeks to go to the biggest comedy festival this town has ever seen, there are tickets available for so many great shows that it’s hard to know where to start.

How about catching Al Porter fresh from hosting TV3’s Blind date? As well as closing the opening Gala at the Spiegeltent on Thursday 26th October, Al can be seen MCing the Irish Comedian of the Year Grand Final in the same venue on the afternoon of Monday 30th, performing “as Gaeilge” at GaelGairi Club Grinn in An Taibhdhearc Theatre on Thursday evening and has just announced a matinee performance in the Spiegeltent with his full band on the bank holiday Saturday.

Reginald D Hunter is also on his way to these shores; the Georgia native is no stranger to Galway and like a fine wine is only improving with age. While we are on the subject of amusing Americans, they don’t come much funnier than the grouchy deadpan genius of Rich Hall who brings his Hoedown show to Róisín Dubh. A festival regular, former Perrier award-winner, Rich, never disappoints. Another winner of the most prestigious prize in comedy is David O’Doherty who can be seen on Bank Holiday Sunday in a terrific mixed bill. Appearing with David is the very talented Bernard O’ Shea, better known as Eamon from Bridget and Eamon and Phill Jupitus, the Swiss army knife of comedy. Phill can be seen performing improv with The Stephen Frost Impro Allstars, reading poetry on a Bob’s BlundaBus, sketching art works in Kenny’s Gallery and dishing up brunch in Massimo.

Irish born but Australian favourite Jimeoin is heading to the Town Hall Theatre on Friday27th. This is one comedian who can make you laugh just by moving his eyebrows. Speaking of raised eyebrows, another award winner, Katy Brand, is showcasing her hilarious one-woman show ‘I was a teenage Christian’ in An Taibhdhearc. Let’s just say the church’s loss was comedy’s gain.

It’s pleasing to see how many fantastic female comedians are gracing the Vodafone Comedy Carnival bill this year. Multi-award winning Francesca Martinez was born with cerebral palsy but prefers the term ‘wobbly’. She will be performing her ‘Wobbly Manifesto’ in An Taibhdhearc on Saturday 28th. The Roisin Dubh hosts two of Ireland’s finest comicson Sunday night. Deirdre O’ Kane and Katherine Lynch need no introduction and this promises to be a wild night.

Also needing no introduction, Ardal O’ Hanlon, PJ Gallagher, Joe Rooney and David McSavage will be tearing things up on various mixed bills around town. All are best known for their seminal TV performances but it’s in the live arena where they really shine. In contrast, The Lords of Strut were fairly unknown about a year ago but having made it to the semi-finals of Britain’s Got Talent, the talented Cork twosome are ready to bring their A-game to Galway this month.

One of the coolest customers in comedy, Tom Stade has starred in Live at the Apollo, The John Bishop Show and Michael McIntyre’s Comedy Roadshow. He is Canadian by birth, hilarious by nature and performing his solo show ‘I Swear’ in The Kings Head on Tuesday24th.

The Vodafone Comedy Carnival always offers up a few unusual shows and this year is no exception. There is a full suite of comedy events taking place on a converted ex-London double decker bus parked in Eyre Square. Your host is the wonderful Bob Slayer and all shows on Bob’s Blundabus are ‘Pay What You Want’.

Another unusual comedy offering is Faulty Towers: The Dining Experience. Based in The Galway Bay Hotel over three nights, Basil, Sybil and Manuel will entertain while you dine on a three-course meal. This hugely popular show has been running for years and it’s great to see it back.

Two up-and-coming stars of antisocial media, Rory’s Stories and Giz A Laugh are making their festival debuts this October. Facebook sensations for their hilarious depictions of Irish life in all its unvarnished glory, this should make for an incredible Bank Holiday Sunday night in An Taibhdhearc.

In a different venue, and in a terrific coup for the festival, Louis CK – America’s biggest comic has kindly given the rights to allow scenes from his masterpiece ‘Horace & Pete’ to be performed in The Town Hall Theatre. This is a rare treat and rounds off an incredible line-up of comedic talent spread across a multitude of genres in a jam-packed week.

So there you are, while there are many shows sold out, there are so many more great shows still on sale. Galway, you are in for a treat, even the procrastinators among you. 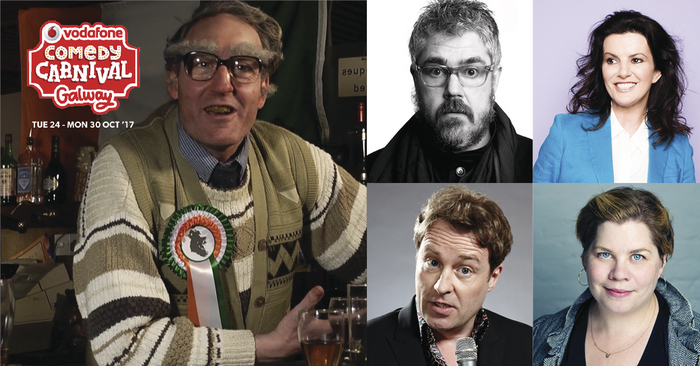