AMONG THE array of exciting gigs at the Absolut Big Top during the Galway International Arts Festival is A Night At The Proms with the RTÉ Concert Orchestra. Entitled Viva America!, the programme offers a pan-American celebration of some of the finest and most colourful orchestral music from that continent.

Wielding the baton on the evening will be David Brophy who has conducted with leading artists and orchestras all over the world; collaborated with famous international soloists like Barry Douglas, Sir James Galway, Lang Lang, and Nicola Benedetti; as well as with rock and trad artists including Eleanor McEvoy, Paul Brady, Mary Coughlan, Shaun Davey, Altan, U2, The Chieftains, Clannad, and Sinéad O’Connor.

Given his illustrious career, it is surprising to learn that Brophy, who grew up in Santry in Dublin, was a late starter at music. He only began piano lessons at 13 and even after his Leaving Cert was more intent on pursuing a degree in art.

“My art teacher asked me, as I was in middle of preparing a portfolio to go to NCAD, what I did when I went home from school. I said the first thing I did was play piano,” Brophy reveals. “He replied ‘Well don’t do art, do music instead.' My parents had a bit of a freak-out wondering if could I do music like that, so they called my piano teacher and he said yes if I worked hard. At that stage I only had Grade 4 piano so he said if I took a year out to practice I could make it, which I did and got up to Grade 8 after working seven/eight hours a day, then went on to do a diploma and then a degree and that was it.”

There was little classical music played in the Brophy home as he was growing up. “When I was in school I would have played keyboards in a band and all I listened to growing up was rock music,” he recalls. “There’s no music in my family; my folks are not really into music and there was no classical music played in the house. The folks were into the likes of James Last and not much else. I’m a black sheep in the family.

“I do remember we had an LP of Beethoven’s Fifth Symphony that came with one of those magazines. My dad bought that and I remember him playing it when I was about 15 and thinking it was pretty good. It’s a strange piece because it’s seen as being high art but it is very accessible. A lot of my exploration of classical music was self discovery; nobody gave me a route map or guided me. I got more interested in it when I went to college. I remember I bought a copy of Vivaldi’s The Four Seasons when I was 17; it was a cassette and I ruined it I played it so often.”

Since those early days Brophy has become one of Ireland’s foremost conductors, and, as he looks ahead the RTÉ Concert Orchestra’s Galway appearance, he outlines how he devised their proms programme. 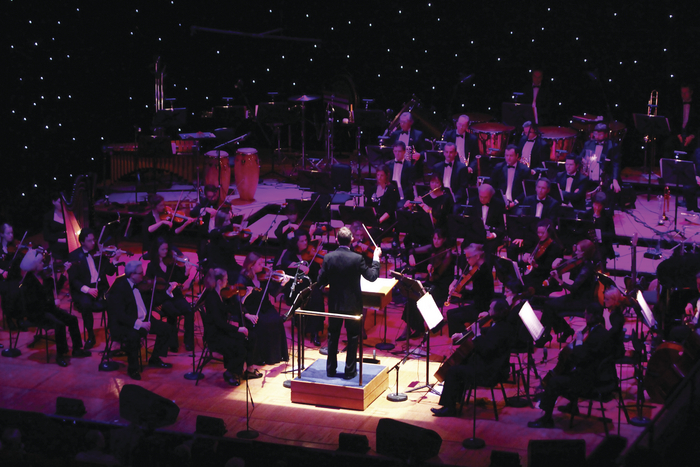 “The last time we played there we had a mixed bag of pieces so we thought this time it would be good to have more of a theme," he says. "We put together an American programme combining South and North American music. A composer I’ve got to know recently is a fantastic woman called Claudia Montero from Argentina who has won two Latin American Grammys. She got in touch with me about the possibility of performing her new piano concerto 'Concierto en Blanco y Negro'. It struck me it would be great to do a South American piece based on black and white along with Gershwin’s 'Rhapsody In Blue' so that’s what we’ve done.

"We have the two piano concertos, Claudia’s in the first half which is a world premiere and Gershwin’s in the second with the brilliant English pianist Clare Hammond. She won the Royal Philharmonic Society’s Young Artist Award last year and she is a great up and coming fantastic musician. So we’ll be having a world premiere in Galway and world premieres are not easy to come by so I’m thrilled to be taking this programme to the arts festival. We’ve also added some pieces people will know - 'Fanfare for the Common Man', Bernstein’s Overture to West Side Story, and Candide, as well as Aaron Copland’s suite from Rodeo. There’ll be a mix of pieces people don’t know and ones they are familiar with.”

Brophy expands on Claudia Montero’s 'Concierto en Blanco y Negro'. “The concerto is for piano and strings," he says. "It is strongly rooted in South American traditional music, which you can hear straight away, but there is also a sort of melancholy behind the music which is probably behind all great music; think of great Irish music or great Russian music, you have that melancholy element. It’s not sadness, just an elegiac sense or yearning for older times and that is rooted in Claudia’s traditions from that part of the world.

"Her concerto is very accessible and a fascinating piece. I’m really looking forward to playing it. I know Clare is really delighted with the piece; I first got the score three months ago and thought it was fantastic. I think it is one of those pieces that you hear for the first time and love straightaway. She will be coming to Galway for the premiere. It’s a big deal, we are hoping to record it as well and that it will go on to be a success for her and maybe she will win another Grammy for it. I think it will be a treat for Galway concert-goers.”

Brophy concludes by expressing his enthusiasm for his upcoming arts festival appearance. “It’s a huge thrill for myself and the RTÉ Concert Orchestra to go to Galway because it’s difficult for orchestras to tour outside Dublin," he says. "We’re really grateful to GIAF and Paul Fahy for having us down and there are serious, knowledgeable, music people in Galway, so we always get an appreciative audience. It makes a big difference to our summer to head down to the festival. I know Claudia and Clare can’t wait to get there as well.”