TRACY BRUEN is something of a modern day Renaissance woman - singer, songwriter, pianist, guitarist, band leader, theatre director and actor, teacher at a special needs school, and a Galway Advertiser Solo Artist of the Year winner. Next week opens a new chapter in her creative life when she launches her debut album Mirror.

That Tracy’s album begins with a series of layered voices, wordlessly harmonising a cappella, is appropriate given how deeply music and singing runs in the blood of the Bruen family. Now living in Galway city, Tracy is originally from Dunmore in the north of the county where, “myself, my Mam, my Dad, my aunt, and my uncle, are all part of the local choir, so singing is a huge family affair”.

“We all try to outdo each with the harmonising at sing-songs,” Tracy tells me during our Tuesday afternoon conversation. “At Christmases, it’s this extended, beautiful vista of everyone singing. That culture of the sing-song is huge in Dunmore. I grew up with that.”

Playing music looms almost as large as singing in the Bruen household. “Both my granddads played traditional music,” says Tracy. “I didn’t know my paternal grandfather, he died before I was born, but I play his silver flute. It’s a beautiful heirloom that has been passed down through the generations, and that's very special. My uncle was in a band. As children and teens we learned piano, and the tin whistle. I’m the only one who has kept it up into adulthood, but everyone in the family can hold a tune.”

However there were occasions when singing, and especially whistling, were deeply frowned on. “We did have this rule growing up of, ‘No singing at the dinner table’,” recalls Tracy, “and Granny used to give out, saying, ‘A whistling girl is heard in Hell!’”

Listening to Mirror - released on the Galway label Citóg Records - what comes across most strongly is how Tracy is a singer of tremendous depth and range. Not restrained by genre or one vocal style, she puts her voice at the service of the emotion of the song - most notably on ‘Time’, where her honesty and vulnerability create something quite moving.

She can also be theatric and dramatic (‘Mirror’ and ‘Into The Woods’ ), deliver her words with a sense of fun (‘Make Mama Proud’ ) or be poignantly reflective (‘Merry Go Round’ ) - yet in each performance, it is obvious we are not hearing an actress perform, but are getting a glimpse in to the singer’s mind and heart. “I have always had a range of different styles in me and I’ve always wanted to get them out,” she says. 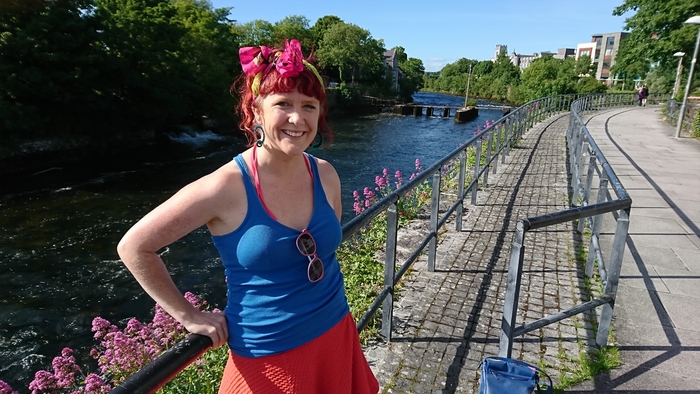 Another force in Tracy’s life, one she believes in deeply, is Feminism, which she expresses through a number of her songs. “As I have grown and matured as a woman in this world, I find a lot of what I write about is Feminist. It has taken me a while to be able to say ‘I am a Feminist’ and that I write about Feminist issues. To say you are a Feminist is to put yourself up and out there, it’s a way to draw criticism on yourself that you could be protected from by just denying you’re a Feminist.

“My song ‘Fall Away’ deals with my world, and the modern world in general, in which everybody seems to have a say in women’s rights, but sometimes the last person to be asked and considered is the woman. I’m frustrated by that. I want to live in a world where autonomy for all is promoted and until I see that progress I will continue to be angry and continue to write songs that help me work through that anger.”

Tracy’s vocal versatility is reflected in the diversity of her music. While it is grounded by her voice and an acoustic setting, there is room for indie, folk, country, jazz touches, quirky prog-pop, and little stories set to song. In this she is backed by her band of front rank Galway musicians - guitarist Padraic Joyce, bassist Hob Junker, violinist Stephanie Swanton, and drummer Adam Downey. As a taster for the album ahead of its release, Tracy has streamed ‘Make Mama Proud’ on Bandcamp - begging the question: Is Mama Bruen proud?

“She is!” declares Tracy, “but when the video and single came out, she listened to that song, and I knew what was coming. It is a very personal song, but I had to tell her, ’It’s not about you, Mam’. ‘Are you sure?’ But Mam is proud I’ve made the album. My parents are coming down to the launch show at the Róísín Dubh, which is going to be a big party I think!”

Mirror is the long awaited follow-up to Tracy’s delightful debut EP, Play Outside The Lines. Now that she has a copy of the album in her hands, and it is set for release on Bandcamp, Spotify, and iTunes, how does she feel? “It feels unreal, it’s very, very surreal to be looking at it, given that we’ve been at it for two years,” she says. “There was a time when I worried if we’d ever finish it, but then we turned a corner at Christmas, we had a date for completion, and we knew it was going to happen.”

As well as being singer-songwriter Tracy is also involved in theatre. This year she directed Jonathan Ryan’s Afterimage for Fregoli’s Fruition project which ran at Cúirt and was revived weeks later for a run in The Mick Lally Theatre. As an actress, she has performed in Mary Mary Mary, again with Fregoli, for the 2016 Galway Theatre Festival.

“I am theatrical when singing on stage and I bring the theatre into my songwriting,” she says. “In theatre, the collaboration and community you get in the rehearsal process of bringing a script to life is great fun, but when you play music you have written yourself, there is a deeper satisfaction in bringing that to life. It’s pure selfish, because it’s your own work, not someone else, but music also has collaboration with others in the studio, and in the live performance, and arrangement of the songs…there are many similarities between the two.” 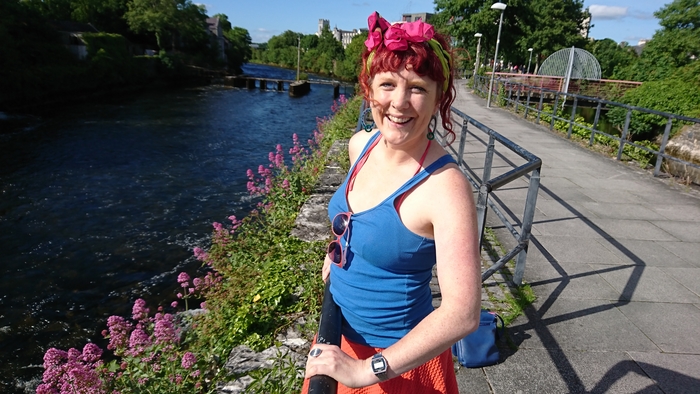 Creativity and the arts also deeply inform Tracy’s professional life as a teacher working with special needs children. What are the challenges and rewards of such work?

“I’ve worked in schools for children with special needs for about six years,” says Tracy. “I just couldn’t imagine working anywhere else. I love the creativity it brings, as you have a group in front of you with a spectrum of needs, and strengths, and intelligences, so you have to figure out how to access that child on their own level, and you have to be creative to do that.

“Music and drama really work in helping in that environment. Arts education works because it enables a number of students to sit in a group, to do something they love, and not realise they are actually sitting doing it, whereas, if you were to ask them to sit down in a lesson style, they might find that very challenging.

“I have pupils who have found a voice through music - what I mean is that even pupils who find communication very difficult, engaging in a music class, experimenting with percussion or instruments, that alone tends to relax them and before they know it, they’re communicating with you by asking for things they want and need. An arts education enables pupils to access so many levels of the curriculum in a different way.”

Tracy Bruen launches Mirrors in the Róisín Dubh on Friday June 9 at 9pm. Support is from The Bluebirds, who will join Tracy for a number of songs; and American singer-songwriter Whim. Admission is free. Listen to Tracy's music at www.tracybruen.bandcamp.com and soundcloud.com/tracybruen