On the 23rd of September 2014, a little miracle was born in University Hospital, Galway. Juliet Smith was, at that point, Ireland’s most scanned baby according to her mother Gabrielle. The reason little Juliet was a miracle baby was because the condition that threatened to take her before she was born was so rare that it was a 1 in a million chance of occurrence. Gabrielle was told that her baby might not survive and that she should prepare for the worst.

The condition was Rhesus isoimmunisation. This isn’t uncommon and can be dealt with in nearly all cases. But in Gabrielle’s case her antibody levels were so high that the medical staff dealing with her said they had never levels like them in anybody.

Little Juliet had fluid around her lungs and heart and despite reacting positively to an initial infusion of blood at around 20 weeks her condition started to deteriorate again. A 2nd infusion was administered and again there was an improvement followed by a decline. It was at this stage that the medical staff in the Rotunda, where Gabrielle was receiving treatment, believed that little Juliet probably wouldn’t make it. “The news was devastating, even though it was expected to a certain extent,” Gabrielle said. “She received 5 transfusions in all but it wasn’t until the 3rd transfusion came from Galway that we then had some real hope.”

That transfusion came via Blood Bikes from Galway. Mike Carty was on the motorbike that day. “We knew that this little baby was in a serious condition and that there was a chance that she might not make it, even with the transfusion,” he said. “But we felt that if there was the slightest chance that the blood that we were going to deliver would save her we were going to deliver it no matter what.” And deliver it they did! Juliet’s condition improved and continued to improve as she grew steadily stronger. “We knew after a few weeks then that she would be fine,” a delighted Gabrielle said. “We were able to come to Galway for the birth at 34 weeks which was great.” Young Juliet is now living in Bearna with Mom and Dad and her older sister Ava and as Mom says’ she’s flying it.’ 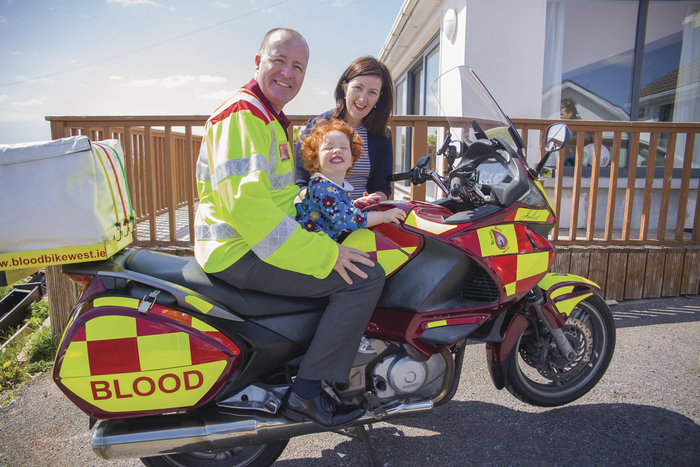 Mike Carty, Blood Bikes with Juliet and Gabrielle Smith. Mike delivered blood that saved Juliet before she was born. There will be a charity event in aid of Bike Fest West in the Galway Plaza on Sunday May 14th. There will be a Monster Bike Exhibition, a Family Funday and a Charity Run. The world-renowned charity stunt rider, Mattie Griffin, will perform as well.

One can only imagine the heartache that Gabrielle and her husband Alan were going through as their little baby’s health declined. They are highly complementary of and indebted to the Blood Bikes crew for playing a part in saving the life of their little girl. “We can’t say enough good things about them or praise them enough. They are a fantastic group and we will be forever grateful to them.”

There will be a charity event in aid of Blood Bike West in the Galway Plaza on Sunday May 14th. It will a Monster Bike Exhibition, a Family Funday and a Charity Run. The world-renowned charity stunt rider, Mattie Griffin, will perform as well.