THROUGHOUT THE noughties writer/director/performer Peadar de Burca was a familiar presence on Galway's theatre scene with a string of shows under the Morwax Productions banner.

These ranged from classics by O’Casey and Shakespeare to adaptations of the movies Reservoir Dogs and Pulp Fiction, culminating in De Burca’s self-penned one-man comedies Why Men Cheat and Like A Virgin. Since 2009, De Burca has been absent from Galway, relocating to Poland where he has been raising a family with his wife Wanda. Next week, he makes a welcome return to the Town Hall studio with his new show, Confessions Of An Immigrant, where he recounts his adventures and mishaps as an Irishman in eastern Europe.

“I moved here in 2010,” he tells me over a skype chat. “When my eldest daughter, Lily, was born I decided to settle here. I had been going back and forth before that between Poland and Ireland, doing shows and so on. Lily looks very Irish whereas her younger sister, Malina, looks like her mother’s side of the family. Wanda was in college and it was left to me to raise them; I was the stay at home dad.

"I also had to try and find a way to bring money into the household. It was tricky; what most people here in my situation do is teach English as a foreign language. I couldn’t do that because I’m just not a teacher. So I did what I was used to and started doing bits of comedy and writing. It wasn’t a great plan as there are very few English speakers here! Then I also started doing a regular column for the newspaper, Gazeta Wyborcza.”

Since moving to Poland, De Burca has developed asthma, earns the equivalent of €200 a month, and has tried and failed four times to learn Polish, all of which he talks about in the show.

“It’s an honest account of what it’s like to move to a different country and try to survive,” he explains. “I poke fun at myself and my inability to learn Polish. I think it is one of the hardest languages in the world to learn. It was bad because I couldn’t contribute to the working household in terms of filling out forms and all that sort of stuff. When I’d go for a hair cut Wanda would have to write me a note to show to the barber. In other ways it was good I didn’t know the language because I’d get myself into weird or ridiculous situations or misunderstandings which I’d then write about in my weekly column for the paper." 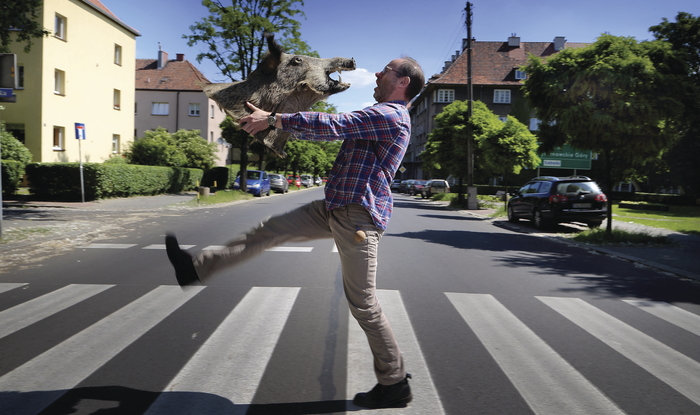 “A lot of what Poland is going through now is like Ireland in the 1980s. “They still have a strong connection to the Church and Pope John Paul II is an absolute hero. I’d occasionally write something critical of his iconic status and that would tend to go down badly; they don’t like criticism, I guess they don’t yet have the self-confidence as a nation. There’s that mindset still which you get in ex-communist countries of obedience rather than debate and they can be narrowly pragmatic.

"For instance Lily was in a singing contest at school where the kids were all supposed to sing a song in a foreign language and she chose ‘Peigin Leitir Mor’ and practiced it for weeks. On the day of the contest they wouldn’t let her sing it because Irish wasn’t on the list of languages they had compiled and when I asked to see the list only two languages were on it; English and German – languages Poles would be most likely to need as emigrants. Having said that, the people are amazing. Slow to become friends but when they do there is a great connection. They are very ‘Irish’ in that they will do anything for you. My friends here have made the difference and kept me up when I was low.”

De Burca reflects on what it’s like to be back on stage and performing again in Galway: “When I came over here I got wrapped up in raising the family and stopped doing theatre. I was a bit burnt out as well. I still love theatre and I’m at the stage now where the girls are a bit bigger and don’t need me round the whole time, so I can get back into theatre and start doing stuff again. It’s kind of surreal; it was a big part of my life and then it went for seven or eight years. I am so excited to be back and going into the Town Hall studio again. I never thought it would happen. It’s a lovely feeling to return home.”