THE LAST Wilderness is set to be a milestone in the career of Galway based artist Cecilia Danell. Not only a major solo exhibition, opening in the Galway Arts Centre on Dominick Street, tomorrow evening, it will be the most extensive, and varied, display of work from this multi-talented creative to date.

Two floors of the gallery will be given over to Cecilia's work, with the ground floor featuring paintings, and the first floor containing work in a various media. “It’s really exciting,” Cecilia tells me. “As a Galway artist, the Galway Arts Centre is a place you want to exhibit. I was here before with group shows, but this is my first solo show in the centre.”

Cecilia is originally from Motala, on the eastern shore of Lake Vättern in southern Sweden. Her artistic talents were encouraged from a young age by her mother and grandmother, both of whom paint as a hobby. An early inspiration were the illustrations in Astrid Lindgren’s Pippi Långstrump (Pippi Longstocking ) books. By her teens, Cecilia was becoming keen on pursuing art as a career, and she had also become interested in Irish music - both trad and rock - which eventually led her to move to Ireland at 19. By 2004 she had enrolled at the GMIT Cluain Mhuire, and she credits Galway with the development of her distinctive style.

“I don’t really paint the Irish landscape as I don’t think it’s my story to tell,” she says. "There’s a long history of painting Galway, but I don’t have the same connection to it I have to the Swedish landscape. But I went to art college in Galway, Galway is where I developed my artistic practice, I have a studio in the city, and the fact is, my work might be very different had I not left Sweden."

While the Scandinavian landscape remains her primary focus as an artist, Galway's pace and temperament provides the atmosphere which allows her work to thrive. “I’ve lived here so long now,” she says. “Most of my friends are here. Galway is an easy-going place. It’s a city, but still small, you’re still close to nature and the sea, you’re not lost in a big metropolis. There are lots of gigs, good places to hang out, and good people.”

Wandering through the paintings on the arts centre's ground floor is to wander through the mountain wilderness of Norway, or its it? What may look like wild, untamed, nature, is deceptive, and this is a key theme of Cecilia’s exhibition - the sometimes blurred boundary between what is real and what is not. 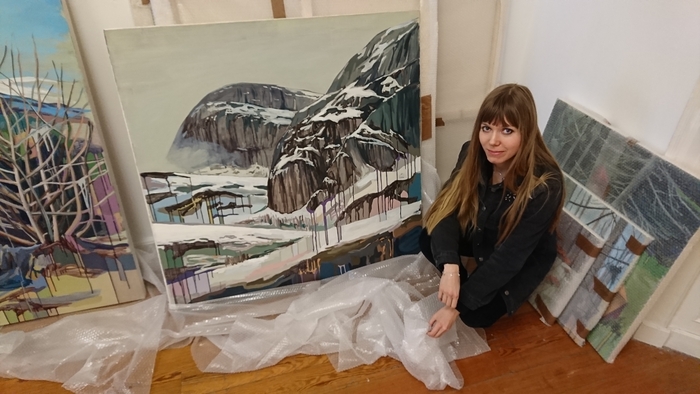 Many of the paintings were inspired by Cecilia’s residence last year in the Nordisk Kunstnarsenter in Dale, south-western Norway. “Norway has a lot of mountains compared to the area of Sweden where I’m from, which is very flat but has lots of beautiful forest,” she says. “The mountains were very new to me and were something I’d never painted before. I was interested in capturing the effect of weather and the change of the seasons on the mountains, and the weather at Dale is very changeable and wet, like Galway. With landscapes I don’t just pick the prettiest scene. I have to engage with the landscape, I need to walk among it, build a personal relationship with it, feel I’m in some way part of it.”

Cecilia’s paintings are not literal interpretations of the Norwegian landscape, but very personal reinterpretations born of both her experience of that landscape, and the methods by which she depicts it. This is encapsulated in the exhibition’s centrepiece, ‘This Blue Is Sky Wide’, a landscape dominated by a majestic mountain range, while below, felled logs and wooden boxes indicate people recently at work.

“People talk about the wilderness and have this romantic idea of untouched nature, but all landscape is a construct, it’s been shaped and affected by the presence of humans, by managed forestry, and machinery,” she says. “In ‘This Blue Is Sky Wide’, the boxes and stuff were the remains of a campfire me and the other artists had on the last night of our residency. To look at the painting you might think it was in the remote wilderness, but if you could turn around, 10 feet away are the artists' studios at the Kunstnarsenter. These places are not as wild as we think they are.”

Cecila’s use of colour is striking, but so too is the manner in which she deliberately allows paint to drip downwards on the canvass, abstracting the images, and drawing attention to how they are not as representational as they appear on first view.

“The dripping happens first, before I do anything else,” she says. “I use acrylic for that and construct the image loosely, then I paint the rest in oils, using stronger colours. The dripping abstracts the image, makes me less reliant on the photos I’m working from, as the drips condition the image - I may paint over them, or within them, which changes the image, so it’s more about my interpretation of the landscape that just a depiction. It makes the work more interesting for me.” 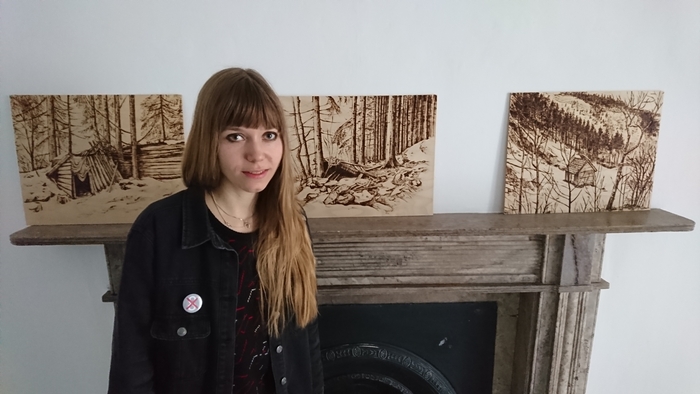 When I meet Cecilia on Tuesday in the GAC, she's overseeing the installation of the exhibits for the first floor, which will feature wood burned images on plywood; light boxes with black and white photos shot on analog film; a sculptural object inspired by icicles; and even the creation of a forest. “I really identify with forest landscapes,” she says. “If you grow up near the sea you always identify with that, wherever you go. I did’t see the sea until I was 11, but the enclosed landscape of a forest always has an attraction for me.”

Arts Council funding made the diverse work possible. "It allowed me make something more ambitious for this show,” she says. One of the highlights could well be Tonight At The Magic Theatre, a Super 8 film animation by Cecilia, with a soundtrack by her friend Sophia Ek. It will be shown on a screen placed between fake trees made of wood. The film was shot in a community theatre, with animated objects moving about on the stage, and in a woodland, where the same objects also move about.

“It deals with what is real and what is fake, and the theme of presumed reality,” says Cecilia. “Erecting the trees around it continues that. It’s the staging of a fake wilderness - a fake version of a woodland created by objects that were once part of woodland themselves. What’s being presented is not necessarily the objective truth.”

The Last Wilderness opens tomorrow at 6pm. The guest speaker is writer Sue Rainsford, who has also written an essay for a publication about Cecilia’s work which will also be launched on the night. The exhibition runs until Thursday April 20. There will be an artist talk on Saturday March 25 at 2pm in the arts centre. Admission is free and no booking is required. See www.ceciliadanell.com