ONE OF the critical hit albums of 2016 was Introducing Karl Blau, a 10-song set of sixties and seventies styled country gems that melded singer-songwriter Karl Blau’s mellifluous baritone with Tucker Martine’s silky production.

The album sees the American musician cover songs by the likes of Link Wray, Townes van Zandt, Waylon Jennings, and Don Gibson, and he pretty much knocks everyone right out of the park. Galway audiences can now check the man and his music out in person because this Sunday February 19 at 8pm, Blau brings his richly atmospheric and soulful sound to the Róisín Dubh for what promises to be a memorable gig.

I caught up with Blau while he was on the road in France and began by asking how the tour was going so far. “It’s been a miraculous tour disguised as troublesome,” he says wryly. “Our rental van broke down yesterday on the French freeway – whatever you do, don’t break down on a French freeway! But it was fine in the end; we met some nice folks who didn’t speak English but were really sweet and we made it to the show, two hours late, but we got a ride with all our gear which was awesome.”

I observe this scenario is exactly like the video for his album’s opening track ‘That’s How I Got to Memphis’ in which Blau’s character is alternately car-driver and hitch-hiker as he makes his way to Tennessee. “Exactly!” Blau chuckles. “It’s weird, self-fulfilling prophecies are real!”

A native of Anacortes, Washington State, Blau is a multi-instrumentalist, singer, and DIY icon who helped turn his hometown into an indie-music mecca. He has released more than 40 records in 20-odd years, many self-released in handmade packaging and mailed to subscribers, and others on iconic indie Northwest labels K and knw-yr-own. Blau has also toured and recorded for years with Laura Veirs, the Microphones, Little Wings, and Earth.

Producer Tucker Martine is known for his distinctive work with Neko Case, The Decemberists, and Laura Veirs, and she first introduced him to Blau. One day, in 2008, Martine asked Blau to have a go at ‘That’s How I Got to Memphis’. “Tucker’d had the backing track in his computer for like six years and was wondering what the right voice would be,” Blau tells me. “Then that day he asked me and I learned the song there and then and took a crack at it, and that’s still the vocal that we use on the album, if it’s not broken don’t fix it.”

The collaboration, pairing Blau’s deeply sonorous voice with Martine’s warm, modern, arrangements, recast the Nashville hit in a new light. Blau was able to communicate the essence of the song in such a moving way that he and Martine started dreaming of making a whole record based around their shared excitement for that collaboration. The result was a single of ‘Memphis’ and, finally, eight years later, the album Introducing Karl Blau.

“In choosing the collection, Tucker drew from cuts that would play to my baritone range and pay homage to his roots growing up as the son of a successful Nashville songwriter,” Blau explains. “Tucker’s father, Layng Martine Jr wrote songs for Elvis, The Pointer Sisters’, Jerry Lee Lewis, Carl Perkins, and Reba MacEntire. ‘Let The World Go By’, the fourth song on Introducing..., is a Layng Martine Jr song.”

“‘Woman (Sensuous Woman )’ is a perfect pop song sing-a-long that everyone can relate to – the sound of Don Gibson’s original version we just wanted to nestle into ourselves,” Blau notes as he mentions some of the tracks. “Of course, it sounds very different with the velvety Martine touch. Notice the bass drum left out of the verse, what a great device – so powerful when it re-enters during the choruses. ‘Six White Horses’ was a tough one for me. I kept wanting to do an extra-warbled voice for the strong emotion I feel with this tune. It took a lot of vocal takes to relax enough to get this still melodramatic version that made the cut. ‘To Love Somebody’ we made out of hybridizing the Nina Simone version and the Bee Gees version.”

While Martine literally grew up with the Nashville repertoire he draws on for Introducing..., I ask Karl if he also had an abiding passion for this music; “Since my early twenties when I discovered old time country like Lefty Frizzell and Hank Williams I’ve aimed for that kind of ability with my voice,” he replies. “I don’t know if I could have recorded this album until now because I’ve done so much singing over the last 20 years my voice was finally ready for that skill that it takes to accomplish these kinds of tunes. 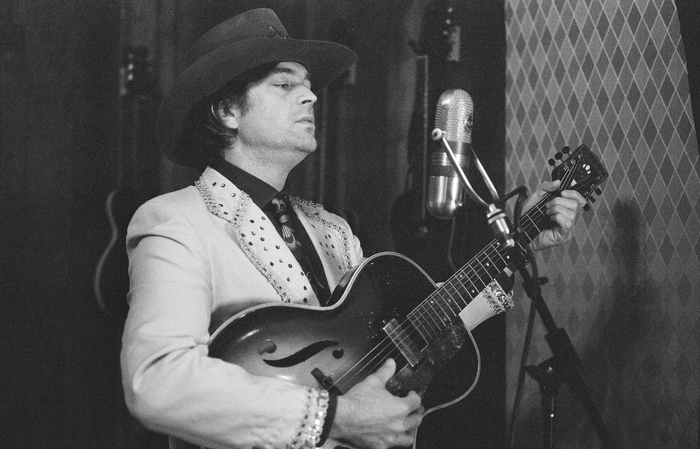 "‘How I Got to Memphis’ turned out well immediately but some of them, like ‘Six White Horses’ were really challenging vocal pieces. But overall the timing of the album was just excellent, I was ready for it. I have some family that are into the country scene, the whole Blau side of my family is really in to country music but they are more into modern eighties/nineties country which I just detested when I was growing up, I was into grunge and metal as a kid. But since my twenties I’ve been collecting these old country records and loving it, but I’d never have thought that we’d make a record like this.”

Blau has said “All of these tunes fit together in the story of the stranger who walks alone at night. It’s a look inside his head as he moves through the darkness.” I ask him if Tucker chose songs that would form an over-arching narrative.

“It wasn’t that intentional,” he explains. “Tucker got all these songs that he felt fit that vibe of Memphis. Each song has a little bit of mystery to it and some kind of narrative but the overall narrative was just happenstance. When the record was finally put together and I was listening to it, it just struck me what a story it was, this character going through this dark time but always with each song there is a little sprinkling of hope along the way and a light drawing the character through. It’s not really my character, it’s like I’m playing this guy on TV or something. I do think that’s where we are at culturally right now, especially men; a self-awareness is starting to form of this dark era that we are in, and I think men especially are opening to their vulnerable and emotional side and are going towards the light a little bit.”

For Karl Blau’s gig at the Róisín, he will be joined by Jon Hyde (pedal steel ), Eli Moore (bass ), and Andrew Dorsett (drums ). Jon and Eli were key players on the Introducing... recording sessions and Eli and Andrew both play in fab NW staple Lake.