MENTION GALWAY to Eddi Reader, and the Scottish singer is likely to go into a rhapsody about the city and county - and with good reason, it’s a place that appreciates her voice and music; it’s somewhere she has played often; and a region of deeply personal significance for her.

“So many things happen when I come over to Ireland, I’ll have them all in my memory ’till the day I die,” Eddie tells me during our Tuesday morning interview. “The music sessions, seeing people playing on the streets, the beauty of the sunsets, the daft things as well - I remember I went too see a psychic in Galway and I remember her not really believing she what was telling me herself, but then she said something that blew my mind. I got engaged in Connemara, there’s a lot of personal and professional stuff associated with Ireland and Galway."

Eddi returns to Galway to play the Town Hall Theatre on Tuesday February 14 at 8pm, as part of an Irish tour marking 30 years from her time in Fairground Attraction to the solo artist of today. She also has a new Best Of album out, and can be expected to perform songs from across that distinguished career at the upcoming Galway show.

“I’ll be doing some new ones that I’ve not recorded yet,” she says. “I’m spontaneous, I like to see what the atmosphere in the room is, and go from there, or as they say, ‘Let go and let God’. And Galway's such a musical town I always have a feeling of slight shame as I know there are people in the audience who could out-sing me.”

Eddie describes herself as “committed to spontaneity”, not just on stage, but in the recording studio as well. “I was recording last week with the band, and we had to do it live,” she says. “That’s very difficult because if one person gets one note wrong, you have to do it all over again from the start, but essentially what I’m trying to capture is something nobody but God puts in the room.

“Spontaneity works, and I have heard it work in sessions, it’s in the energy of musicians performing together. How do they know to kick ass at just the right time, and to end together, in sync, at a particular moment? I trust that magic.”

While Glasgow-born Eddi first came to attention as lead singer with Fairground Attraction, who enjoyed a worldwide hit in 1988 with ‘Perfect’ - a song rarely off the airwaves since - her musical apprenticeship goes back much farther. As a child she recalls “my parents singing in our front room”, before telling me: “Music runs in my family. My great-great-great-granddad was a busker and music instrument-maker in Edinburgh. I’m just attuned to making music without a lot of fuss.”

However, it was a journey to Paris during her youth, including busking on the streets of the French capital, that led to an encounter with ‘The Little Sparrow’, that truly set the course of Eddi’s life towards pursuing music full-time.

“I was at the Place Saint-Michel with friends from Scotland, three guys, one of whom was my boyfriend, and they looked after me,” she recalls. “We lived in a VW van and slept outside the Bois de Boulogne, where all the prostitutes gather. It was a funny experience, but I enjoyed busking, it was the first time I was away from home, from Scotland. Nothing was planned, it was just about getting going.

“People were calling us Écosse, which I’d never heard before. I’d tell people my name is Eddi, and they’d think it was Edith, ‘Oh just like Piaf!’ I didn’t really know who they were on about. I only got to know about her when I went to Paris. Through them I heard about ‘La Vie En Rose’, then a friend introduced me to her music, and now I love Edith Piaf, she’s my hero. And she was also a street singer, like my great-great-great-granddad.” 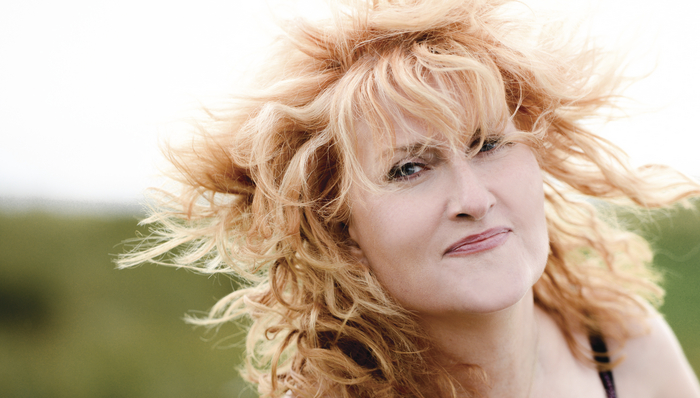 By 1983 Eddi was on Top Of The Pops as backing vocalist for The Eurythmics when they performed their hit ‘Sweet Dreams’. Then came the breakthrough with Fairground Attraction. Although a short lived band, it gave Eddi the foundations from which to launch a move into folk and folk-rock, and towards a celebrated solo career of nine critically acclaimed albums, three BRIT Awards, an MBE, and The Scotsman declaring her “one of Scotland’s greatest national treasures”.

Asked what her career highlight is, she replies: “Getting to this point and knowing the journey was worth it. Music has looked after me. I have got to 30 years and I’m almost shocked to still be as creative all the time.” With such a long career already behind her, what keeps Eddi enthusiastic and hungry for more?

“The work itself is magnetic, it draws me in,” she says. “I have no idea why I’m like that, I’m attracted to being creative. I don’t question it, if there is a pull towards it I go with it. I have this old wind-up gramophone and if I hear a song on an old, scratchy 78, I really like, I will play it over and over again. Or if I find an instrument that intrigues me, even if I don’t play it professionally, or perform shows with it, I can spend hours and hours at it, forgetting to sleep or eat. The next thing I know it’s seven in the morning. That’s what it does to me. That’s the way it is, I enjoy it, and the magic it brings.”

Last year, Eddi came in for criticism - including some calls for her to hand back her MBE - for attending Scottish commemorations of the 1916 Rising in Ireland. However, Eddi had more reason than most to attend such an event and her family’s connections to the Irish Revolution is the subject of a book she is currently working on. The link in the chain is her great-uncle James Reader.

“I knew he was called Uncle Seamus, but he didn’t seem to have any Irish background,” says Eddi. “He was my granddad’s brother, he didn’t talk much about him, but once or twice he did let slip he had a brother who was on the run.”

That was the extent of Eddi’s knowledge until a few years ago when Seamus’s son died. “I inherited all his stuff. I brought them hoping I’d find out about my family history and genealogy, which I’m interested in.”

Among the items Eddi now had were Seamus’s detailed diaries, which revealed he was a half-brother to her grandfather, his birth mother coming from Lurgan - hence the interest in Ireland. Seamus would later join Fianna na hAlba, a Scottish paramilitary organisation, and also the Irish Republican Brotherhood. “He talks about having a sandwich with James Connolly,” says Eddi.

Seamus’s diaries have proven something of a revelation to the singer in what they have to say about socialism, history, and the ‘shared history’ of Ireland, Scotland, and England. It is a project, that, when complete, Eddi hopes will inspire others to examine the workings of the world and society around them.

“Seamus was writing about Scottish revolutionary history and free masonry, and it’s involvement from the 1700s with Ireland and how, what was a British revolution, became an Anglo-Irish affair, and how these things are all connected with ‘empire machismo’ and how in any culture it comes into contact with, it will ultimately fail as it is an idea that is supremacist in its approach.

“In his lifetime, he saw that shift that is leading towards egalitarianism, workers rights, solidarity, independence, and how the Irish had to have a revolution and break away, with conscription being imposed upon them, and people being used to make profits for the elite. He saw it all clearly.”