IF YOU are going to Jason Byrne’s latest stand-up show, Propped Up, there is a good chance you might see the comic - or indeed find yourself - standing on stage wearing a wolf mask - If so, Galway city is to blame.

Propped Up comes to the Town Hall Theatre on Saturday February 4 at 8pm, and will involve “ducks, false chins, portable igloos, bewildered owls”, not to mention audience participation.

“There’s lots of silly props - I buy loads of props, take them up on stage and then just see what I’ll do with them,” Jason tells me during our Tuesday morning conversation. “One of them is a wolf’s head I bought in TK Maxx, in Galway actually, just as I was leaving after the comedy carnival in October. The mouth opens and closes when you’re talking, it looks hilarious…I wonder if it would work in a row? If you were in a row with your wife, and it was one of those rows where she was blind with anger to the point she didn’t see you anymore, I wonder if you slipped it on your head, would she notice?

“I also have red Deal Or No Deal type boxes, with the C word inside to flip open at hecklers. I’ll even do some magic tricks at the audience, I’ve done loads at shows over the years, and they never work, but that’s the point. I do one called ‘The Metamorphosis’ where someone gets into a sack and is transported into a box. I did it at a show in Drogheda, but the punter rolled out of the box, and down off the stage, and the box fell apart. Organised chaos - that’s what the show is.”

Given that much of Jason’s comedy involved audience participation, the Dubliner likes how Galway audiences are among the most willing to get up on stage with him.

“The Galway gigs have always been great craic and the audiences are always great, they always get up on stage,” he says. “You also have to be careful what you say as they will answer you back, and there’s always some Galway mammy in the audience, keeping an eye on what you’re talking about. I’d be looking down at the audience and see such a person, and I’d nearly say to them, ‘Is it OK if I talk about that?’" 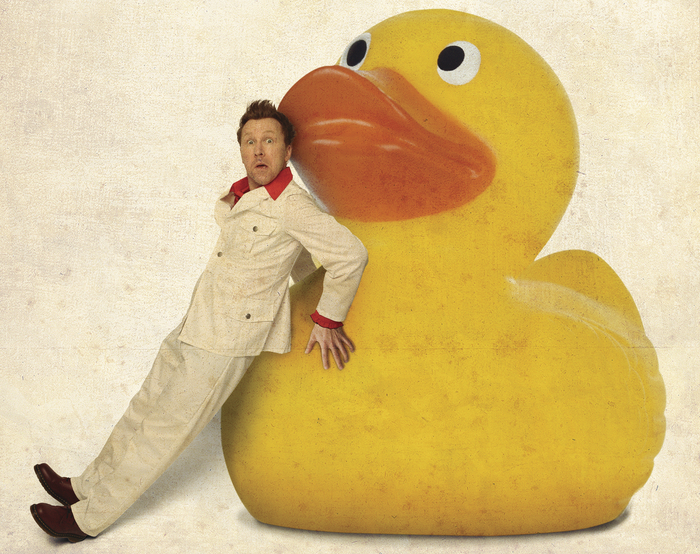 While Propped Up will largely stay away from politics, the nature of these ‘interesting times’ means it cannot be avoided completely, and Donald Trump becoming the 45th President of the United States, is the most unavoidable of an awful brew including Brexit, the rise of the Alt-Right, and the west’s handling of Syria.

“Trump is comedy gold, all the comedians were praying that he would get in,” Jason admits. “Is satire of him possible? I know what you mean, he is comedy himself, but you can still find ways - tease his logic, his hair, and you just have to keep bringing up his Tweets - and those references to pussy grabbing, good God! He’s not hard to take the piss out of.”

For those depressed by Trump’s elevation, Jason warns that The Donald’s hair just might be his undoing - now that he will be travelling by Marine One, the presidential helicopter quite a bit.

“The thing I can’t wait for is when he has to get into the helicopter at the White House,” says Jason, “and him trying to hold down his hair from getting blown all over the place. I know he wears a cap sometimes but that’s going to fly off as well. It could be a good thing though, his hair might get caught in the helicopter blades, and chop him up, and that’ll be the end of him!”

Last September saw the publication of Jason’s debut as a published author, Adventures Of A Wonky Eyed Boy, a memoir of his childhood and teenage years in 1970s and 1980s Dublin - not to mention the numerous show stealing scenes featuring his mother and father.

Indeed it was the stories about his parents that initially attracted the attention of Gill publishers. “They saw me doing a show, they liked it, and said there was so much about my mum and dad that it would make a good book,” says Jason.

The process of writing a book quickly revealed itself as “a whole different discipline” to writing material for a comedy show. “I was looking at the computer and thinking, how do I do this?” Jason says. “I thought it was going to be very hard, but I have a good memory, especially visually, so I visualised the sing-songs; Mam chasing me around the house with a slipper; grinding with a girl against a wall when I was 14; the slow sets, at the discos; or being up the Dublin Mountains with my friends, just setting stuff on fire. Once I started writing, tons of stuff came flooding into my mind. My dad came out as the funniest thing in the book. My agent was asking me, ‘Is it about you or your dad?’”

Jason relates an anecdote about attempted arson with a can of beans: “There was one time we tried to set a tin of beans on fire, just to see what would happen - we wouldn’t be allowed do that now, our parents would be hanging off our lip. There were about 20 of us, and we put the can in the fire and…nothing happened. Half an hour later, still nothing had happened, so I pushed the can with a stick and it blew up! All these beans went over my face, and I suddenly couldn’t see. I thought I was blind. The beans had actually singed my eyelids shut, but my mates wouldn’t tell me for ages, and then it was, ‘Agh you f**king eejit, it was only beans in your eyes.’”

Jason describes the book as “my proudest achievement”, and a nice ripost to an very unsympathetic school teacher more interested in disheartening students than motivating them.

“I’ve done the royal variety performance, sit coms, festivals, ran marathons, but seeing the hard back edition of the book - I never thought I’d do that,” says Jason, “and I thought of my English teacher at school, who said to me, ‘You’ll be no good!’ I wrote this essay at school, I was about 13, it was about me going on a date and how I rented a suit, fake hair for the chest, a medallion. My teacher thought it was a disgrace and got me to read it out, but the class were all laughing as I read it, so he got angry at that, swiped it out of my hand, told the class to shut up, and told me I’d never be any good at anything. I don’t know how any of us in that class turned out as well as we did.”

Wonky Eyed Boy has brought out the author in Jason and his next literary endeavour will be a children’s book, featuring fictionalised versions of himself and his family.

“I’m keeping it in the eighties, I’m keeping me as a child, as a character, and making a little gang of children, with a fantasy/sci-fi element,” he says. “Kids love when you can walk off into different worlds - a parallel world in the eighties! My publishers asked me to keep my mum and my dad in the book as well.”

Another project which could yet turn into something larger was Jason’s short comedy film for Sky Arts last summer, entitled The Rug, about an uptight, straight-laced couple - played by Jason and Amy Huberman (showing her talent as a comic actor ) - who steal a rug from a furniture shop, before going near insane with fear they will be caught and sent to prison (“You’ll be bummed and I’ll be licked!” ).

“Myself and Amy really worked well together and there was a real chemistry there,” says Jason. “Amy’s been busy doing that new drama series and I’ve been doing gigs, but I would love to develop those characters and have them in different situations, so we’ll see what works out there. In dealing with TV companies it’s always about what they want to do. You pitch things, but it’s all down to time and budgets, but I’d like to do something else with Amy.”