IT IS a mark of the man that Christy Dignam, who has endured far more than his fair share of struggles and hard times, has borne his illness - a rare form of terminal cancer - with great dignity and stoicism.

He has fought back the darkness which once threatened to engulf him, and lives each day as it comes, determined to “squeeze any enjoyment from it”, and by doing what he, and his band Aslan, have done since the 1980s - bringing joy and hope to thousands through their music. As he tells me, "music is the saviour."

When I ask Christy how he's doing during our Monday morning interview, he replies, “I’m good, very good. Everything is positive at the moment. I did chemo a few years ago and that holds back the cancer for four years. I’m three years into that, so next year it may come back and I’ll have to do it all again. But I don’t feel bad. I’m not waiting. I’m just playing it by ear.”

Over the last two years Aslan have maintained a regular schedule of live shows. This year saw concerts in Dublin and Derry in August, October brought them to London, while this month they play Galway as part of their current tour. How does Christy find singing and performing on stage these days?

“I can’t be as active as I used to be onstage,” he replies. “The cancer has impaired my heart, it now works at two-thirds its capacity, and I’ve a defibrillator in case my heart goes below a certain beat. Thankfully though, my voice has not been harmed.”

Christy was originally diagnosed in 2012 with with two types of blood cancer - myeloma and amyloidosis. For a time he was confined to a wheelchair and was unable to sing. It was believed then he had only months, and a special concert in Dublin, A Night For Christy, in 2013, was arranged, with performances by Shane MacGowan, Paul Brady, Mary Black, Jerry Fish, Steve Wall, and Ryan Sheridan. It was a wonderful tribute to one of Ireland’s best loved rock vocalists, but this period was also the bleakest in Christy’s illness.

“When I first came out of hospital, I was in a really dark place,” Christy says. “I thought, 'I’ve wasted my life’. Even the music we’ve made, I just thought, we’ve just made a couple of songs, but people are starving, look at what’s happening in Syria, so I had to turn that around, as it was driving me to the grave. I had to think positive and that's what happened, and now I’m on an even keel.”

Getting back on that even keel and going into a type of remission in 2014 brought Christy’s enthusiasm for music back, and led to his determination to return to the road.

“For a few years we didn’t gig,” he says. “The chemo had messed with my memory and I couldn’t remember the songs, I had to re-learn them all, but getting back to work was a really good thing, it’s been a great benefit to helping me through. Then myself and Joe Jewell [Aslan guitarist] did a series of gigs to build my stamina back up, the whole acoustic thing. It was called Songs and Stories, and we played theatres. I really enjoyed that, the different energy, the different vibe. One was in Galway, in the Town Hall, and that was the last time I was here.”

Galway holds fond memories for the Dubliner. “We’ve played everywhere in Galway over the years, it’s always been great,” he says, “the Black Box, the Quays, Setantas back in the day, but the two that stand out mostly were our show at the Volvo Ocean Race, by the docks, that was fantastic, and that acoustic show in the Town Hall.”

It is deeply poignant to note how the singer will approach his next visit to Galway. “I made a decision that, whatever time I have left, I would enjoy it,” he says. “So when I go down to Galway I will be looking around, at the streets, at the people, at Galway Bay, taking it all in, enjoying it, as this could be the last time I will be here.” 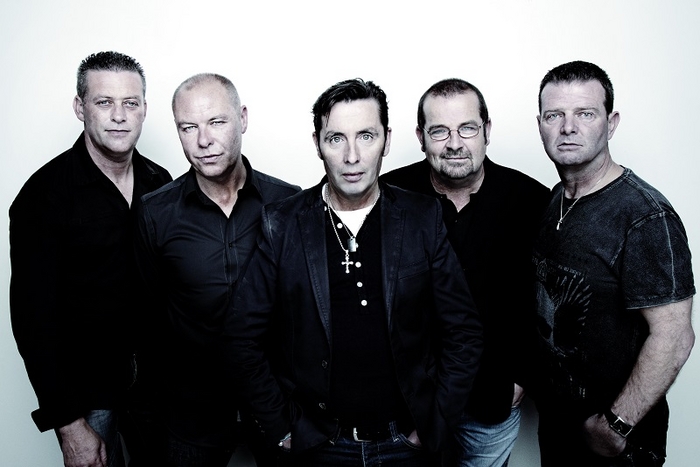 Aslan are currently at work on their next album, which will also be the band’s last. “I want to have a swan song," Christy says. "I don’t know how long more I will have before I go, but it’s great to be so busy. It’s still at an early stage and the very last thing we do is to put a name on it. We’re just working on the songs at the moment, but I don’t want it to be dark and hopeless, I want it to be just an album of good songs.”

“It’s weird,” he says, when I ask him how it feels to work on what he knows will be his epitaph. “It is different to anything I have done before. I want everything to be right, you’re more careful and it’s just the reality I have to accept and live with.”

In this, as in his determination to appreciate every moment of life left, he acknowledges David Bowie as an inspiration. “I thought Blackstar was a great thing to do as a last hurrah,” he says. “We played with Bowie in Slane a few years ago. I’ve always been a big Bowie fan, so I asked my manager, if you never get us another gig, get us this one, and he got it. I couldn’t wait for it to happen, and then we did the show.

“Driving home from Slane I thought, ‘F**k me, I was so nervous about getting everything right, that I couldn’t absorb it’, so I’ve no real memories of it. I made a decision I’d never let that happen again, so when I do something important I take a ‘memory photograph’, so I’m more conscious of that, try to absorb and squeeze any enjoyment from it and that’s where it's at.”

Intriguingly, Christy is also working towards a solo album “of a traditional nature”.

“I studied bel canto singing for 15 years but I want to really do something more like sean nós and incorporate that into an album,” he says. “I’ve been listening to The Gloaming, and their singer is phenomenal, especially his phrasing. I’ve been talking to Finbar Furey about it and he’s been suggesting some songs. That’s something I want to do on a personal level.”

The power of Aslan’s music resides in its down to earth honesty, compassion, and offer of solidarity and hope, best exemplified by their most famous songs - ‘This Is’ and ‘Crazy World’. Indeed, while ‘Crazy World’ dates from 1993, in the era of Trump, Brexit, the Syrian civil war, and the rise of the Right, it has lost none of its relevance.

“It really hasn’t,” Christy acknowledges, “but you know, I believe when you write a great song, they are timeless - ‘Sound of Silence’ by Simon and Garfunkel, ‘One’ by U2 - it stands the test of time, because it works on the emotional level. The emotions never change, regardless of what is on the news, and the thing I’m proud of is that songs like 'Crazy World', 'This Is' and a few others, they are still relevant.”

Aslan play a 'Róisín Dubh presents...' concert in the Seapoint Ballroom, Salthill on Saturday December 10 at 7.30pm. Tickets are available at www.roisindubh.net, the Ticket Desk at OMG Zhivago, Shop Street, and The Róisín Dubh.