THE FAMILIAR story of Cinderella gets a high-flying makeover from Fidget Feet in its thrilling new show - Cinder & The Ellas - which will be performed in the Blackl Box Theatre on Sunday November 6 at 8pm.

In Cinder & The Ellas, Cinders and her mean sisters dream of running away with the circus; all they have to do is win the heart of the handsome and talented Prince, heir of a world famous circus family. He is looking for a new aerial act to star in his next production and whoever wins will get to travel the world as part of his troupe. Things get a bit messy for poor Cinders, who must rely on her heart, her strength,and her phone to rise above all to win the heart of the prince and set herself free (with a little help from her Fairy Godmother app ).

Along with its airborne thrills and spills, Cinder & The Ellas also has some serious things to say, as co-artistic director Chantal McCormick tells me. “We started with an interest in creating a show for our educational work that touched on cyber-bullying and bullying, which is an issue for young kids today," he says. "We really wanted, in the Fidget Feet comedy and entertainment way, to touch on the subject in a way that can start a conversation between a child and a parent or in a classroom situation.

"At that stage we had no idea what fairytale we could work bullying into. Then a young cousin of mine who had experienced bullying suggested Cinderella and it was like a light bulb went off in my head because of course Cinderella is bullied by the two sisters. That’s how the idea started, but as always with Fidget Feet there was a period of research and development. It’s very organic how we work. We’re using circus skills and dance skills and theatrical skills and to tell a story perhaps without words and with added video projection. It is only when we’re in the studio with our artist that we can really start to grow the characters and the idea. 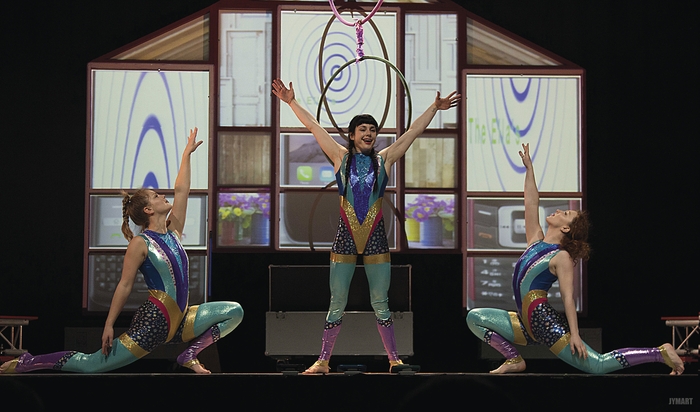 "It’s very difficult to write it before that process happens but when we got Cinder & The Ellas into the studio it just flowed. We saw that the Prince should be from one of the great circus families and he is looking for someone to travel the world with so you have this X Factor style competition to find his partner. We then introduce Cinders and her two sisters who are trying to create an aerial act but the Prince is only going to pick one of them. That sets the scene but we’ve modernised it in that the characters all have mobile phones and are on social media and the Fairy Godmother is a phone app.”

The role of Fairy Godmother is taken by McCormick’s husband and fellow director, Jym Daly, who also creates Fidget Feet’s music scores and video projections. “He’s very comical,” McCormick chuckles. “Our set designer Padraic Hackett has created a set that we can project on throughout the whole show. At times it looks like the screens of different people’s mobiles; all three sisters and the Prince have mobiles and the story is partly being told through that. The Fairy Godmother app appears on Cinderella’s phone and you see it on the projection.”