PJ Lynch, Ireland's Laureate na nÓg, and an acclaimed book illustrator and artist from Belfast, who has won numerous awards for his work, will launch this year's Baboró International Arts Festival for Children.

Now resident in Dublin, Lynch has also designed posters for Opera Ireland and the Abbey Theatre, several sets of Irish stamps, and executed a religious mural for the basilica at Knock. I caught up with him for a phone chat when he was in New York promoting Irish writers as part of his laureate duties. I began by asking how he was first drawn to illustration.

“I did a foundation year in Jordanstown," he says. "That was the first time I got an inkling of what illustration was. Then I moved to art college in Brighton the next year which was very strong in illustration, particularly book illustration. Raymond Briggs was one of our teachers there and he inspired a lot of us to go down that route. He came in once a week and he was a lovely presence who energised everybody. We were aware of his books and he took us into the room one day and showed us a rough cut of The Snowman. We couldn’t believe how good it was and many of us went down the route of children’s books after that.

“When I was at school I wanted to be a painter but at that time I was looking back to the Renaissance period and the Old Masters. I’d have known about the 19th century artists but I wasn’t in touch with what was happening in the 20th century. I learned all about that at Belfast College of Art and started to discover artists who I grew to love like Gustav Klimt, whose work I still really admire. When I went to Brighton I started learning about people like Arthur Rackham and Norman Rockwell and they influenced my work in a big way.”

Lynch relates how he got ‘the start’ as a professional book illustrator; “I was lucky in that as soon as I left college some of the students got together an exhibition and we invited all sorts of art directors and one of them gave me a job so it was a nice easy start. That was to illustrate a book of English fairytales by Alan Garner – I’d never even heard of him at the time I was so naïve! That book went really well and I won The Mother Goose Award for it, and that led on to working for different publishers and the books doing better and better. When I started I was interested in other types of illustration like editorial and book covers, but the children’s books were going really well for me and I homed in on that.” 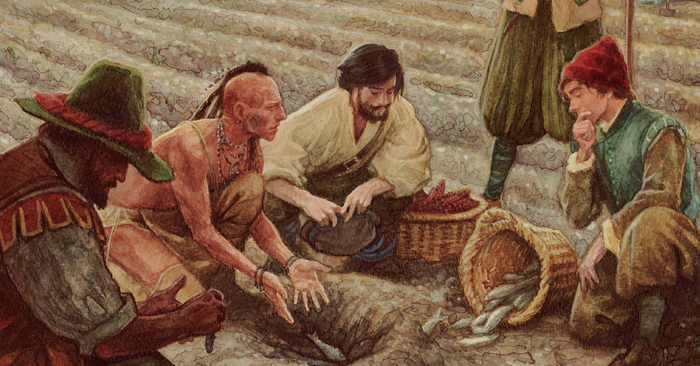 After illustrating many books for other writers, Lynch made his own authorial bow last year with the acclaimed The Boy Who Fell Off The Mayflower [one of PJ's illustrations for which is pictured above].

“I’d written several stories before but I never thought they were good enough to publish,” he reveals. “Then I came across this footnote in the history of The Mayflower about this boy who fell off the ship and was saved. In the history that I read he really was a footnote and it didn’t talk too much about him, but I straightaway wanted to know more about this guy so I found out everything I could and I was delighted with what I discovered.

"He was a servant and he survived the first terrible winter and he married another of the Mayflower passengers. They had 10 children and 88 grandchildren before they died, and they both lived into their eighties. They have 10 million descendants alive today, it’s incredible! I wasn’t quick to get off the mark with that book, my publishers kept giving me really good stories to illustrate and I put off my own idea. Finally I just thought ‘this story is so good and someone else is going to do it if I don’t’ so I finally got down and wrote the story, but it was about five years gestating between the writing and the illustrating.”

I enquire how he landed the job of doing the mosaic for Knock. “That came about quite bizarrely actually. There was a friend of mine who I used to go drawing with, Hugh Maguire. I didn’t even know what he did for a living; I had a vague idea that he was an architect. One day he asked me would I consider doing a mosaic for a religious institution. I thought it would be a very small mosaic, like a 10 foot thing on the floor and I said ‘Yeah, I’ll give it a go’. Then he told me more about it and I found out it was to be the height of a five storey building and 14m across and it was going to be the biggest mosaic of its type in Europe. I tried not to let all that overawe me. I looked at it like any other illustration job but it was a great honour to work on that one.” 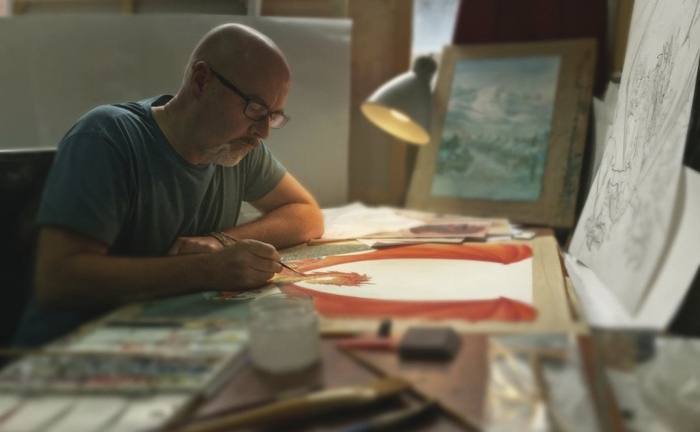 Moving on to Lynch’s tenure as Laureate na nÓg, many people might imagine the laureateship as a writerly gig but he points out he is not unique as a visual artist in holding the role; “I’m the fourth Irish laureate and the second one, Niamh Sharkey, is also an illustrator. In other countries a lot of laureates have been illustrators, though admittedly a lot of illustrators also write, and I have only just got into that myself. It’s a huge honour and I am really thrilled to be named as the Laureate and I am really enjoying the role.

"It’s all about me encouraging Irish children to get involved with books and to read as much as they can. At the same time it’s my job to spread the word about Irish talent abroad. I’m in New York at the minute and I’ve been doing a bit of that where I’m talking about Irish writers for young adults and children, people like Sarah Crossan and Louise O’Neill who are doing really well at the minute. There are some tremendous book illustrators as well, like Oliver Jeffers and Chris Houghton who are doing amazing things in picture books. It’s a lovely job to have because it’s not hard to sell those guys!”

Having been inspired by Raymond Briggs and The Snowman early in his career, might Lynch aspire to seeing his own work on film? “Over the years I’ve worked with animation studios and done bits and pieces in terms of designs for short movies,” he tells me. “I think I prefer the whole idea of doing a book where I’m in charge of the whole thing and don’t have to depend on a team of other people. Working in animation is a very collaborative process. Niamh Sharkey is having a great time doing just that with the Huggle Monster series. I’d love it if one of my books got turned into an animated feature. Having said that my biggest selling book was turned into a movie but it was live action, The Christmas Miracle of Jonathan Toomey.”

In conclusion, Lynch declares his delight at coming to Galway next week; “I’m thrilled to be coming to take part in Baboró. I think events like that are wonderful for children. There is a lot of great theatre and music and art for kids and I think it is going to be a really exciting festival.”

PJ Lynch will officially open the 20th Baboró International Arts Festival for Children. The festival runs from October 17 to 23. On Monday 17 at 5pm in the Town Hall Theatre, Lynch will take part in a panel discussion with artists Tarsila Krüse and Shona Shirley Macdonald, chaired by Alan Clarke, about their careers as illustrators. Tickets are €6. See www.baboro.ie