BE HERE Now was the album which put the cocaine infused nail in the coffin of the hubris filled, jingoistic, corpse of Britpop. The phenomenon which, in the words of Suede's Brett Anderson began "with the charm and intelligence of a Mike Leigh film" had indeed "become a Carry On movie".

For anyone under 30 it will be difficult to imagine or appreciate the sheer hype and spiralling expectation that built up ahead of this album's release in August 1997. Oasis at that point were a seemingly unstoppable force of nature. Their first two albums had made them Britain's favourite band; their 1996 concerts at Loch Lomond and Knebworth attracted 80,000 and 250,000 fans respectivly. They had comprehensively defeated their rivals Blur in the media-driven 'Blur v Oasis War'; and in the words of Irish Independent journalist George Byrne "every last burp and sniffle was front page news". By 1997 it seemed as if the Gallaghers and Co were set to take things to even greater, more dizzying, heights.

The Gallaghers' egos may have believed the hype, but so did most others - almost everybody was sucked into the maelstrom that music critics, fans, and the media, had participated to greater or lesser extents in creating. An example, from an Irish perspective, was when Dave Fanning, interviewing Noel Gallagher on RTÉ Radio, told Noel that audiences could expect the next Oasis album to be different from its predecessors, and find them experimenting with their sound and style, simply because it was going to be their third album. Noel replied that The Beatles did not really pursue experimentalism and avant garde approaches until 1965's Rubber Soul, the Fab's fifth. "So I've got two more albums to go," Noel laughed.

Fanning was aghast and shocked. Instead he should have heeded Noel's view. Oasis were a trad rock band - indeed proudly so. While Blur looked towards The Beatles' ground breaking 1966-1969 period for inspiration, Oasis were about aspiring to a kind of classic 1960s British rock songwriting, not re-inventing the wheel. Therefore to expect Be Here Now to revolutionise contemporary British rock, especially given the warnings of its creator, said more about the expectations placed on Oasis than it did of any kind of understanding of the band itself. 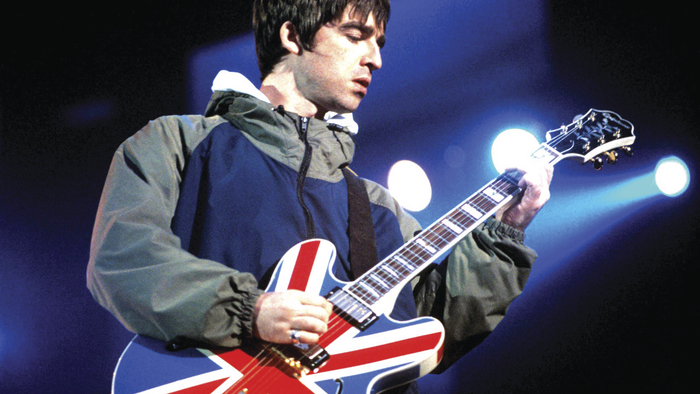 The hysteria continued in the immediate aftermath of Be Here Now's release with many critics awarding it five stars, but very quickly reality set in. Fueled by ego and plenty of cocaine, Be Here Now was over long, bloated, self-indulgent, and worse of all, seemed a poor man's retread of the triumphs of (What's The Story ) Morning Glory. Indeed if only rigorous editing and restraint was applied, Be Here Now would instead by remembered as a shorter, sharper, better album.

As it was, Oasis dropped the zeitgeist ball, one which was gladly and gratefully caught instead by their friend, Richard Ashcroft, and his band The Verve. Their Urban Hymns would become the public's choice of the album defined 1997 (Radiohead however outdid both with OK Computer and instead created an album for the ages. Blur meanwhile, wisely shed the commercialism of The Great Escape and re-embraced their psychedelic/art school principles ).

(What's The Story ) Morning Glory is an album this reviewer regularly takes out for a listen, and 21 years on, it can be enjoyed without the deadweight of nostalgia, hype, and mid-90s zeitgeist capturing, Be Here Now however, is a collection I have not heard in almost two decades. So what does this fresh listen reveal?

What emerges now is a flawed, still bloated, album, but one with fine moments that should be acknowledged. Indeed for an album that was gargantuan in '97, with many songs running past the five and six minute mark ("As the years went by I'd started to accept that the songs on Be Here Now were in fact insanely long," Noel said recently, "too long!" ), this re-issue is appropriately expansive, containing a wealth of bonus tracks (live, demos, unreleased songs ), turning what was a 12-tracker into a 40 strong collection. Yet, these 28 extra songs give a glimpse of what might have been and reveal a few hidden gems.

Oasis always liked it bigger, louder, more in your face than anyone else. The swaggering wall of sound unleashed on Definitely Maybe was amplified on Be Here Now to extreme levels, making each song a pulverisingly uncomfortable assault on the senses. Where it works however is on 'My Big Mouth', when the wall of sound actually adds to its urgent, manic, rush.

Listening again also shows that the anthemic 'Stand By Me' retains a strong appeal; that the psychedelic ballad, 'Magic Pie' with its minor chord progressions, sense of climax, and that screeching guitar line at the end of the chorus, is a neglected gem; and that the 'Wanted Dead or Alive'-style cowboy rock of 'Fade In/Out' is packed a genuine excitement.

The demos and outtakes paint a picture of an alternative, stripped back, quiter, Be Here Now - an album with a greater emphasis on the acoustic, the emotional, the vulnerable, rather than on ego and swagger. The best examples are the single B-side 'Going Nowhere'; an acoustic only 'Stand By Me', where both the subtleties of the music and of the heart are allowed emerge fully. This is also true of the (also ) acoustic only tracks 'Angel Child', 'If We Shadows', and one simply left as 'Untitled' - indeed Noel has rarely sounded more confessional, making them three highlights of this re-issue. 'Setting Sun' is an unexpected, but very welcome, take on seventies British folk-rock.

Coming as it does in 2016, Be Here Now is more digestable in this era of dipping in and out of albums and playlists, and taking a magpie approach to any kind of collection of music. It's a tough listen all the way through, but to dip in and out of these 40 tracks is to be treated to a number of deloights that will please Oasis die-hards.