WINNER OF a ‘Lustrum’ Award at this year’s Edinburgh Fringe Festival, Orla Murphy’s acclaimed play, Remember To Breathe, comes to the Town Hall Theatre next week in a staging by Murphy’s own Figure 8 Productions.

Remember To Breath is about three people trying to survive the ‘aftershocks’ of world events. In a pool in New Zealand, Irish emigrant Maeve is learning to swim spurred on by ‘swimaholic’ coach Doreen. Even as she battles the water, Maeve’s heart is calling her home to an unresolved dilemma with her beloved father Johnny.

While Murphy has never been to New Zealand, she is no stranger to the emigrant experience, as she tells me after a day’s rehearsal; “I’ve emigrated numerous times. The last time was when I was offered film work in New York and while there my husband, who’s a lecturer, was still in Dublin. Being away as an older emigrant was very different. I felt very much the slip between there and home, your family is further away and it’s a whole different emotional territory. The Christchurch earthquake happened then and I remember watching it on TV and thinking ‘Jesus, that could happen, you could be miles away from home and your world could fall apart’ so I guess that was the germ of the play.”

Ireland’s economic crash is a further element in the drama, as Murphy explains; “I came back from Manhattan where it was sunny and lovely to Ireland and the Troika and that horrible three weeks of snow. The mood was so depressed and then the earthquake aftershocks came in Christchurch. Around the same time I had this image of a woman swimming and all these things came together. I felt that the idea of an aftershock being worse than the main event had a lot of resonance with what was going on in Ireland, and in life. Life is a series of aftershocks; you don’t see it coming and it hits you and you have to try and recover and that’s kind of what the play is about.” 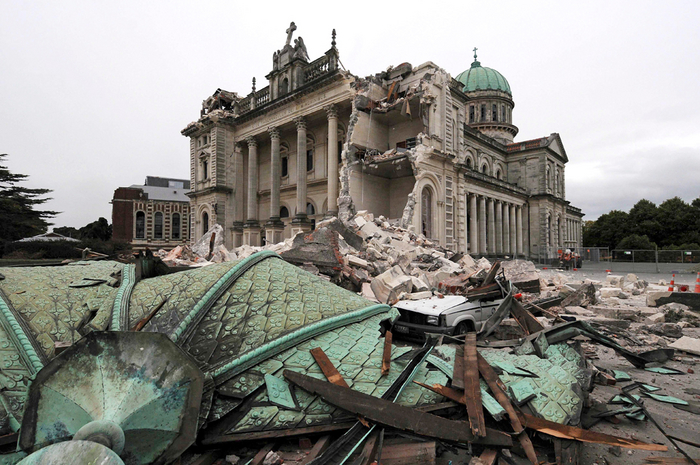 Murphy describes Maeve, the play’s central character; “She’s an architect who has emigrated to New Zealand to try and rebuild her life. Her husband is a Kiwi, they have lived in Ireland, and when the aftershock hits New Zealand he wants to go home. Maeve’s central concern is that the building business that she had with her father and husband has failed and she feels as if she has betrayed her dad by leaving.

"When she gets into the water she feels like she is betraying him a second time because he once saved her from drowning as a child and she’d made a childish promise she was never going to swim and now she is. Maeve is torn between where she is and where she has come from. We follow her story backwards and forwards between swimming lessons in the pool and different moments in her life and subconscious. The script is spare and poetic and the movement and the lighting and sound design are all very important.”

Aftershocks also impact on the play’s other two characters, swim-coach Doreen and Maeve’s dad, Johnny; “Like Maeve, Doreen is rebuilding her life,” Murphy notes. “She lost everything in the earthquake; her job, her apartment. She’s found swimming as a way of earning a living but also empowering herself and that’s what she is trying to do for Maeve.

"Doreen is one of those people who believes very passionately in the power of physical activity. Maeve is terrified of water and never thought she’d learn to swim but she is there now and Doreen is not the kind of woman you say ‘no’ to. Maeve’s dad Johnny is at home trying to rebuild his life like a lot of men in their sixties who, at that particular time, should have been retiring and then had to start all over again.”

Murphy is full of praise for Liz Fitzgibbon’s performance in the central role of Maeve; “I saw 28 actresses before Liz and she is amazing in the role. The thing about the characterisation is that Maeve is very strong, she is very emotional but she is also very funny. A lot of actors I auditioned were what I’d call straight dramatic actors who were very emotional but they couldn’t turn on a dime and be funny, or else they could be funny and light and not quite do the other. Liz can do it all and she does it with great grace.”