IF YOU are in a band and keen to promote yourself in a city that does not know you, a good way is to get out onto the street and perform, but if you are an indie-electro band you need amplifiers, which are increasingly banned for busking.

Galway electro duo Until April, currently on tour in Germany, have found a creative way to overcome this and have been winning over the public with their novel street silent disco show on-street concerts.

Until April began life in late 2015 as an experiment between vocalist and synth player David Owens and drummer/instrumentalist Alan Walsh. They challenged themselves to create a show, recordings, videos, and brand within that timeframe. The goals were achieved - including the release of their debut single ‘I Wanna Be Yours’ with its accompanying video, the pair felt confident enough to quit their jobs and began touring Europe in May.

Now in the second month of their first European tour, Until April have played across Germany and Switzerland, performing live concerts, creating new music, and now collaborating with producers in Berlin. 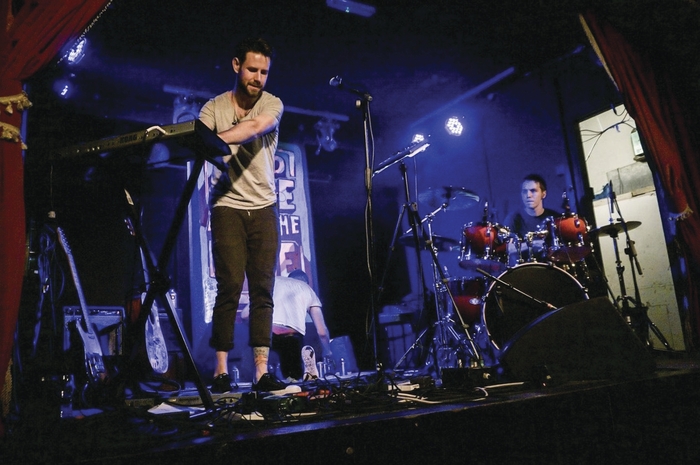 To promote their live venue shows, Alan and David perform on Germany's streets, and in the process, have found a way to circumvent the amplifier and loudspeaker ban that is in place in many continental cities - hence the street silent disco show.

"It uses the ‘Silent Disco’ concept in a live music environment, where the audience listens to music transmitted to wireless headphones rather through a speaker system," says David. "It creates such a great atmosphere People otherwise going about their day are suddenly in a different world as soon as they put on the headphones. It also doesn’t annoy or intrude on anyone that’s not interested in hearing the show, such as nearby shop employees or local residents."

Accompanying Until April has been filmmaker Lakshika Serasinhe of LakshikaFilms, along with crew member Lisa O’Farrell, who have made a short film of these 'Silent' shows. “I’ve been touring with the band for the past five weeks filming the silent street show adventure," he says. "It’s amazing catching people’s reactions as they put on the headphones for the first time."

Alan Walsh adds: “It was a big investment for us initially, so we were a bit apprehensive about bringing this to the street, but the reaction from the public so far in Germany and Switzerland has been incredible! We’ve even received quite a bit of encouragement from the police here in Berlin, which was a great surprise! It’s a great way to get our music out there and promote ourselves."