OF ALL the participants in this year’s Galway International Arts Festival it is probably a safe bet to say that Cameron Russell is the most glamorous.

Russell’s looks and glittering career resumé may make lots of young women swoon with envy but she herself offered a thoughtful, probing, assessment of her lot in a 2012 TED talk entitled, Looks Aren't Everything. Believe me, I'm a Model. In it, she described herself as having won "a genetic lottery," emphasized the selection and styling of models on the basis of a bias on looks and skin colour, adding: "it was difficult to unpack a legacy of gender and racial oppression when I am one of the greatest beneficiaries". The talk is one of TED's 20 most popular talks of all time and was described by The Huffington Post as ‘refreshingly frank’.

Russell’s visit to Galway for the GIAF First Thought Talk, also entitled Looks Aren't Everything, at NUI Galwsay’s Bailey Allen Hall, is sure to be one of the most interesting and thought-provoking events in the programme.

'I've met so many amazing women in media, feminists, activists'

Ahead of her festival foray Cameron took time to answer a few questions about TED and modelling and I began by asking her whether she had done much public speaking prior to giving her TED address. “I had not,” she replies, "but I practiced about 30 times the night before so I had it memorized and that helped keep a good confident flow once I was on the stage - although I admit I was nervous when I started to change clothes [Russell does a quick costume change early in the lecture] because it was taking so much longer then I thought it would!”

Given the talk has been one of the most popular TED talks, what kind of feedback has it received and how has that influenced Russell’s subsequent ideas and activities?

“One really beautiful outcome that I hadn’t expected, is that the talk has been like a signal, reaching other like-minded people from all over the world,” she tells me. “I have met so many amazing women in media, feminists, activists, and have even made some really wonderful friendships with people who found me through the talk. They usually made a connection through Twitter or Tumblr, and in some cases, offline.

“It was also nice to hear from other women who model that the talk spoke to them and articulated things they also felt. I still get messages on Facebook and Instagram and Twitter almost daily from young people who are watching the talk. It feels amazing to have got lucky and made something that speaks to so many people and, generally, seems to have made them feel happier, more confident, and more conscious. Of course, people who aren’t moved probably wouldn’t take the time to write.”

Russell began her modelling career in her mid teens. During the talk she shows some glossy images of herself taken at that time and candidly reflects on the contrast between the womanly, assured, image projected in the photos and the reality of her being still very much a young girl. Did she find modelling intimidating during that time?

“I was actually a very confident young person,” she declares. “It’s one of the reasons my parents let me work and travel alone. Of course those pictures don’t represent who I was, they were someone else’s creative vision. I don’t look at them and think of myself at 16, I think of the team I was working with, what the shoot felt like, etc.”

'We are in a moment of enormous transformation' 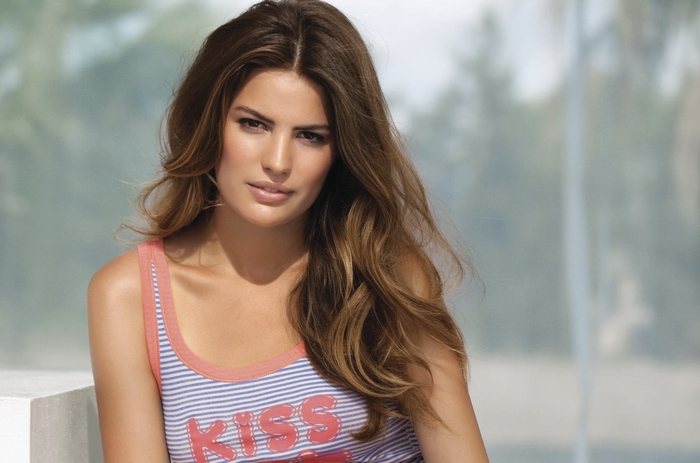 Models are very much the glamorous face of the fashion world but how much respect/influence do they actually enjoy within the industry? Are there things Russell would like to see changed in their working roles?

“This is a great question because we are in a moment of enormous transformation,” she states. “Social media has really improved the power and respect successful models have. When I started a model might have a ‘moment’ and then disappear – tragically sometimes after they had quit school, moved cities, and given their all.

"The flip side is, it’s getting harder and harder for ‘new faces’ to break in, because if they can’t build a big social media following, they won’t be competitive enough to succeed. When I started most of the new girls didn’t speak English, didn’t come from famous families, didn’t have money, now we’re seeing a lot women with more privilege succeed because they’re the ones who can build the social media following more quickly.

"I would like to see an industry that is more sustainable, that treats all the people it employs in all parts of the supply chain better, pays livable wages, has more women and gender non-conforming people in creative and leadership positions. And on that final point, I’m actually starting up a residency programme at Red Hook Labs in Brooklyn to invest in new creative leaders, so if you’re interested, keep an eye out for that!"

Finally, given that Looks aren't Everything was the title of the talk Russell gave, how difficult was it to assert herself in terms of her intelligence and personality when so many people would see her in terms of her looks?

“Sometimes having people judge me actually helps to figure out who I want to work with or spend time with,” she notes. “If people are hanging out with me or contacting me or interested in collaborating because of how I look, it’s easy to tell, and predict that the relationship won’t be fruitful.”

Cameron Russell will appear at NUIG’s Bailey Allen Hall, where she will talk with RTE’s Evelyn O’Rourke, on Wednesday July 13 at 8pm. Tickets are €8. See www.giaf.ie