It has been a busy 12 months at the ballot boxes – General Elections in Ireland and Britain, a landmark vote to introduce same-sex marriage in the Republic. Each has been noteworthy, historic, and in some cases seismic but, as Insider has noted for some time, the biggest electoral event facing Ireland in 2016 is Britain's upcoming EU membership referendum on June 23.

Virtually everybody under the age of 40 (and older maybe ) is used to Europe being the ultimate bugbear in British politics. It played a huge role in the downfall of Margaret Thatcher; dogged John Major’s premiership; paralysed the Tory Party for a decade following the 1997 General Election; and still continues to convulse the party. It may be only older readers that appreciate this, but go further back, and Labour was once upon a time badly divided over the subject.

Despite this, the prospect of the UK leaving the EU would have been regarded as a fantasy until a few years ago. Yes, there have been opt-outs from various measures over the years (the Euro, Schengen, the Social Chapter for a while ) but the prospect of leaving the EU was never realistically on the agenda until 2013 when David Cameron was bounced by the more fanatical members of his party into committing to a referendum.

Recent polls show a tightening race, some of them putting the ‘Leave’ side ahead and, at the very least, the prospect of the UK leaving is a live one. The nuclear option could become a reality.

From Ireland’s perspective this is a very worrying prospect. A Brexit would create a range of uncertainties that a State just recovering from an economic crash could do without. It will almost certainly create significant challenges for the Irish economy but as Insider will outline later, the economic implications tell only half of the story.

How will trading relations function between Britain and the EU post-Brexit? We simply do not know. A vote for Brexit will be followed by negotiations - which most expect to last a number of years - in which the terms of Britain's exit are agreed. At the very least we are looking at a prolonged period of uncertainty, which cannot be good for business and will surely hinder economic growth here. 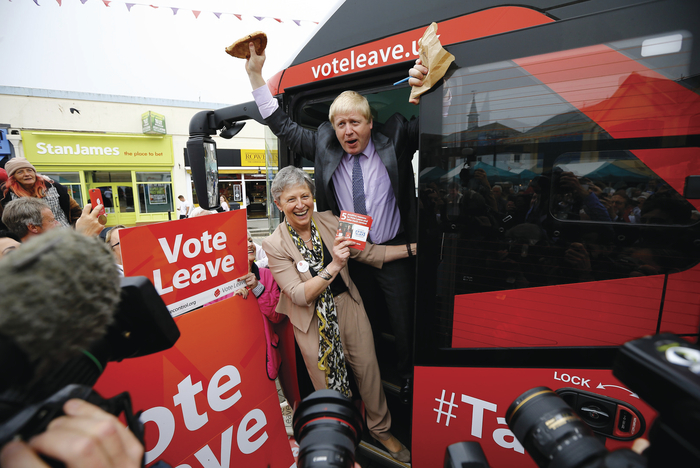 There has been much speculation about the trade deal the UK might get and whether it will garner much sympathy from its EU counterparts in negotiations. Some of the 'Leave' campaigners have been brash in claiming there is nothing to worry about, as it will also be in the EU's interests to cut a deal. Others are not so sure. Ireland is likely to find itself in an invidious position in any such negotiations, being on the EU side of the table but perhaps wishing to do a deal that is more favourable to the UK.

In addition to cutting a trade deal with the EU, the UK will have to do likewise with a range of other nations which currently have agreements with the EU as a whole. There has been much speculation recently, for instance, about whether it will find itself "at the back of the queue" when it comes to a deal with the USA.

Relations between the UK and the USA have cooled noticeably in recent years - the latest development being a potential stand-off between the nations over the possible appointment of the Argentine Foreign Minister as UN Secretary General - and this may be quite a bumpy process. Any slowdown in UK economic growth will have a further knock-on effect here given the close ties between the two countries.

The economic impact of a Brexit then will potentially be enormous but it is not the only area in which it will be felt.

Immigration and under-cutting the EU

Looking at the long-term picture the big question is how the UK will function post-Brexit. What is the prize in the minds of the Eurosceptics? Is it the freedom to eat a wider range of bananas without having to refer to an EU Directive on their shape or size? Alas, it is not that simple.

Among the issues that most vexes the Eurosceptic right in Britain - and it is important to appreciate that this is an exit that will be negotiated by the Eurosceptic right wing of the Conservative Party, almost certainly under a new leader - are employment regulations, such as for the Working Time Directive. They regard such regulations as a burden on business and a hindrance to economic growth. Some, such as the prominent Eurosceptic Priti Patel have gone so far as to argue that they are partly responsible for a 'work-shy' culture taking hold in the UK. Environmental protection and even some Health and Safety regulations are also viewed as a barrier to growth.

The exit from the EU will be seen as an opportunity to free the UK from the shackles of such regulations. They hope this will give the UK a competitive advantage over the EU nations. This under-cutting however will inevitably lead to tensions within the EU and a demand for a loosening of standards in response. It may be premature to invoke the phrase 'race to the bottom' but this is most definitely one of the areas in which the long-term impact of a Brexit will be most keenly felt.

A Brexit will potentially affect policy within the EU, but one policy area that will be impacted on in the immediate future in Ireland is immigration. We have seen that this is one of the driving forces behind the ‘Leave’ campaign, or at the very least, it is being used to advance their cause in recent weeks.

There will certainly be radical changes to Britain’s immigration policy. This may of course potentially have economic ramifications, but there is a more real and immediate concern for Ireland; how our own immigration policy will work in practice.

The Common Travel Area between Ireland and the UK means the two states must follow virtually the same immigration policy, which in practice means that Irish immigration policy is largely determined, not in Dublin or Brussels, but in London! We have seen this in action over the past 12 years; both simultaneously allowed free movement of labour from the 10 new Member States that joined in 2004, both then imposed some initial restrictions on Bulgarian and Romanian citizens when those countries joined in 2007, before lifting them a few years later. On each occasion an announcement from Whitehall was followed within a few minutes by a similar one from Dublin.

What then for Irish immigration policy in these circumstances? Alternatively, will it be the Common Travel Area that will go, potentially creating a burden for the huge numbers of people that travel between the two countries every day? What does this mean for the border with Northern Ireland?

In the event of a Brexit, the UK’s only land border with the EU will be the border between the two parts of Ireland. As a number of people – including this week the British Chancellor of the Exchequer, George Osborne – have noted, the radical changes being proposed by the ‘Leave’ side mean that there will be have to be a ‘hardening’ of this border. If the aim is to restrict movement from the EU into the UK then the only logical conclusion is that this has to be the case. It is a matter of practicality as opposed to ideology.

The imposition of customs checks and immigration checks at the border will have a profound impact. First of all, returning to economic matters it will add a layer of bureaucracy to, and surely a slow-down in cross-border trade. It will however impact just as significantly in other areas. For starters it will be a cumbersome everyday burden for those who live near the border, on either side.

Twenty years ago the opening of border roads was one of the most practical implications of the peace process. Nobody wants to return to those days. It will also impose a cost burden on authorities on both sides of the border as the administrative task in securing the border will be huge – for instance in addition to the main roads there are dozens of informal crossings.

The psychological impact of this will also be huge and this could be where the greatest danger lies. There has been much speculation – in particular when viewed in tandem with the likely reaction in Scotland – that a Brexit could in the long run spell danger for Unionists. In the short term however, the biggest impact may be among Nationalists with a sense of being ‘locked into’ a Northern Ireland, still with a Unionist majority and now heading down a road that is culturally an anathema to them. It hardly compares with the old Stormont but it may still create a degree of instability.

For all of these reasons (and some more ) Insider, while not wishing to be seen to interfere, from an Irish perspective earnestly hopes that on June 23, Britons vote to remain in the EU.