Writer Joshua Ferris, who reads at Cúirt this Saturday, has been variously described as "one of America’s sharpest observers of 21st century life" (Daily Express ), a "Virgil of the disaffected" (LA Times ) and "a gifted satirist very much in touch with the fear and paranoia that undercuts US society" (The Irish Times ).

His writing is both hilarious and engrossing, and his three novels to date, Then We Came To The End, The Unnamed, and To Rise Again At A Decent Hour, have firmly established him as one of the leading American authors of his generation.

To Rise Again At A Decent Hour, Ferris’s most recent novel, was shortlisted for the Man Booker Prize and won the 2014 Dylan Thomas Prize. In it, his considerable gifts for comedy and philosophical speculation are given full expression as Ferris holds forth on mobile phones, the internet, city living, obscure Biblical sects and, not least, the importance of flossing.

The novel’s central character is New York dweller Paul O'Rourke, a man of many contradictions: he loves the world, but doesn't know how to live in it. He's a Luddite addicted to his iPhone (his ‘me machine’ as he calls it ), a dentist with a nicotine habit, an obsessive Red Sox fan who frets about their victories, and an atheist not quite willing to let go of God.

Then someone begins to impersonate Paul online, and he watches in horror as a website, Facebook page, and Twitter account are created in his name. What begins as an outrageous violation of his privacy soon becomes something more soul-frightening: the possibility that the online "Paul" might be a better version of the real thing. As Paul's quest to learn why his identity has been stolen deepens, he is forced to confront his troubled past and his uncertain future in a life disturbingly split between the real and the virtual.

'We've all been forgiven and borne up into heaven'

Ahead of his visit to Galway, Ferris talked with me about his writing and To Rise Again At A Decent Hour. The novel finds its main character engaging with both Judaism and Catholicism. I ask Ferris why he chose Catholicism when the USA has largely viewed itself as a Protestant nation historically. Was Catholicism part of his own background?

“I chose Catholicism for its architecture, its pageantry, and its hymnal,” he replies. “However, my mother was born Catholic. She lived in an orphanage run by Catholic nuns for a short time during her childhood. My only experience with the Catholic Church took place when I was nine or 10, when my mother was compelled to return to it for reasons of her own. I remember there was a guitarist. It was a short-lived experiment, for she soon met my step-father, a devout Lutheran, and now we've all been forgiven and borne up into heaven.”

The relationship between Paul and an elderly woman named Betsy throughout the book is very entertaining, and comprises much sparring on matters religious. Betsy’s ardent faith makes her impervious to all Paul’s cynical jibes, and yet, for all his mockery, Paul still lets her cajole him to visit Third World locations to provide dental care for the poor. He also goes out to dinner with her occasionally. How would Ferris describe their friendship?

“How frightful to live in complete piety,” he declares, referring to Betsy. “Almost as frightful as succumbing to total cynicism. That is their platonic love affair: the pious old lady and her bristling cynical youthful acolyte. Neither really know how to live properly, as I do. They're imbalanced. They need each other to see the other side of things.” 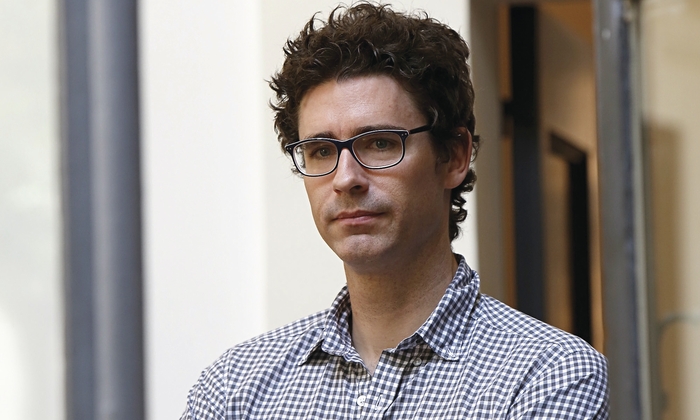 Ferris was born in Illinois in 1974 and, after graduating from the University of Iowa in 1996, lived in Chicago for several years before moving to New York where he currently lives. The novel has some great riffs on what it’s like to live in the city. Does he himself enjoy being resident in the Big Apple? “I hate New York,” he answers, pithily and emphatically.

To Rise Again is laugh out loud funny, while offering serious reflections on faith, love, technology, and the anxieties of modern life. “There are always two sides to every fish: the good, buttery part, and the bone,” Ferris observes.

During his time in Chicago, Ferris worked in advertising, a profession where the likes of F Scott Fitzgerald, Salman Rushdie, Joseph Heller, and Fay Weldon also cut their teeth. Were there lessons he learned through that job that benefitted his fiction? “You learn from advertising that the common denominator is your only audience. You're taught to speak to the middle-schooler and to never trust that anyone's ever any smarter than that. I've spent much of my time as a fiction writer writing in opposition to this awful sentiment.”

'You're not a scallywag stationed before the mast'

More recently, Ferris took part as a crew member in a voyage to the Antarctic as part aboard a sailing ship. Was that for novelistic research I enquire? “I went to Antarctica to see Antarctica. I also went because I was intrigued by what kind of group dynamic 20 days on a tall ship - in this case, the barque Europa - inspires. One reads about it in Melville and Conrad. Here was the chance to experience it firsthand. Of course you're not a scallywag stationed before the mast. You're a tourist, and you eat like one. But it's still arduous and compelling, and turns out the group dynamic is as fascinating as the elders have it.”

Going off on a tangent, albeit a topical one, I ask Joshua his opinions on the ongoing US presidential primaries, and what he thinks they reveal about the current state of the country?

“Well, that's a serious question in need of a serious answer, and there are no serious answers in American politics these days,” he opines. “It is all a punchline with real consequences. The pundits and the journalists have the toughest job: pretending day in day out for the sake of their readership that this is not a complete farce, but an honest debate between real people. Unfortunately the only real thing is the spilt blood, of which I fear there will be more.”

Joshua Ferris will read from his work, with Lisa McInerney, at 1pm this Saturday at the Town Hall Theatre. Tickets are €10 from 091 - 569777 and www.tht.ie