IT IS 10:30pm and Hurricane Bridgett, or what ever they are calling it this week, is beating sheets of rain against the window, almost in time to the dread beat emanating from the speakers while Lee 'Scratch' Perry’s Super Ape LP spins on the record deck.

In stark contrast, the call I am about to make is to the record's creator who is in Negril, Jamaica, enjoying some down time at 5pm local time ,before his impending tour. The line is bad. “Hello Lee?” There is some rustling, voices, a sound like chickens running about, then a voice that is instantly recogniseable. “I’m in the back of a van!” comes the crackly voice with a Jamaican twang. “I’m in a dingy record room in Ireland” I reply. “Waaaaah Irelan’, hello Irelan’! Irish rebel devil." This is going to be interesting...

Held in very high esteem in the music world, Lee 'Scratch' Perry holds status as one of the most enduring and original reggae producers and artists of all time. From his early days in the 1960s as a singer, bodyguard (replacing Prince Buster ), and talent scout for Coxsone Dodd’s Studio One in Kingston, through his production of the Wailers’ classics 'African Herbsman' and 'Soul Rebel', Perry’s inimitable style sets him apart from any other producer. His musical genius is inseparable from his self proclaimed madness.

The road to Super Ape

I asked Lee about the early days on the Jamaican sound systems and in particular his involvement with Coxsone Dodds, owner of the Motown of Jamaica, Studio One Records. “It was OK because that was my first start. It take me to this level anyhow. It was a lot of learning but it had to stop because he had a really bad vibration.” He laughs a little as he tells me this, but he has not always been so philosophical about his dealings with Coxsone. Fed up with the low pay and lack of recognition as both a recording artist and A&R man he nipped across the road to Joe Gibbs' studio, cutting his signature tune to warn Coxsone and anyone else who might underestimate him that 'I Am The Upsetter'.

It was here Perry formed one of the first versions of his own Upsetters house band and started the Upsetter label. Perry's 1968 jab at Gibbs (that's right, he fell out with him too ), 'People Funny Boy', employs a new emphasis on a fast, scratchy, guitar sound, to create what Perry alleges is the beginning of reggae, but he’ll have to hammer it out with Bunny Lee on that one, as the latter claims his production of Lester Sterling's 'Bangarang' to be the first reggae tune recorded.

It was in 1976 Perry produced the seminal Super Ape album with his studio band The Upsetters. In Jamaica, the album was released under the name Scratch The Super Ape on Perry’s own Upsetter label. Later that year it got its international release under the shortened Super Ape.

The album, produced at the famous Black Ark studios in his back yard, is the quintessential Lee Perry sound. I asked why he chose to showcase this record now, and what was it that made this record so special. “Love," he says. "The love of people make this record. With the love of the people all things are possible. Without the love of the people nothing is possible. Without love there is war and war is not good. War is a demon. Spirit of love is the spirit of dub and spirit from above. I am the creator of dub and creator of love. Let's live in love and love in dub and then we have unity. I am sending you love from Ganga mountain [I think he was in the Blue Mountains near Negril at the time of our phone-call]. Ganga science, ganga logic, and ganga magic. Love from the mountain top!”

I asked him if he was the creator of dub. “There would be no spiritual reggae or dub without Lee Perry, just rocksteady and ska," he replies.

Perry's conversational style is musical, though difficult to decipher at times, yet his appeal seems to be universal. This of course is aided by his breathtaking body of work encompassing the foundation of Jamaican popular music, to bringing artists like Max Romeo and The Congos to the world stage, to more recently producing and collaborating with artists like The Orb and Mad professor, but also the mystical quality that surrounds his genius.

'I will chase the devil out of Ireland' 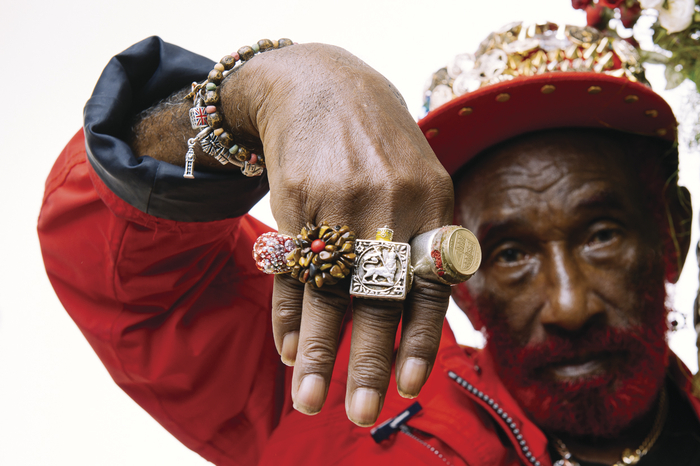 To what does he attribute his sustained popularity, and in particular, to be on point, his popularity in Ireland? “Irelan’ love I because the songs I put pon them are perfect and they react to perfection. Their spirit make me much younger. And their sweet love make me happier. And their spirit create new life. They help me make new songs for the next generation, the children of tomorrow.“

Super Ape is an example of the perfection of which he speaks, and which he and his Upsetters will perform as part of the album’s 40th anniversary commemorations. I ask what we can expect from his Galway gig this time around. As expected the answer is shrouded in the incommensurable Perry code. “Irish people that come to my upcoming dates will help I create peace in music. All my fans. I will deliver them from Satan. I am going to kill the devil! I am coming to kill the rebel devil. Kill Satan in Ireland. Rebels in Ireland I come to kill your devil. Yeah! I will chase the devil out of Ireland with my coconut staff like black St Patrick.”

I have been to a number of his gigs and if anyone can chase the devil out of Ireland he can. Nearly 80 years of age, he can dance on one leg for an hour, and shake hands with hundreds of people after a long night of largely improvised performances.

After the tragic recent burning of his Swiss studio, this time completely accidental unlike his ‘incident’ with the Black Ark, I wanted to delicately inquire where and how he likes to create his music. “In bed,” he laughs. "Music in bed is very big creation. To create music in bed is magic because naked music is the best music. Naked riddim is the greatest riddim. Sex wants all my money but I won't let sex have my money. Sex I’ll have you killed. Sexy girls you won't rip me off. Sexy woman you won't rip me off. Sexy girls you won't rip me off for I am the rippah. I am Jack the Rippah. I am the only one Jack one rippah.”

After a time attempting to decode all this, trying to figure out what it all means, I resign myself to the fact that I am a mere mortal. We must not question what or why but instead enjoy the delivery. This is, after all, the Upsetter. This is Jah lion conquerer of evil. This is the godfather of dub. This is the “black St Patrick.” This is the Super Ape.

Lee 'Scratch' Perry and his band play the Róisín Dubh on Saturday March 5 at 8pm. Tickets are available at www.roisindubh.net, the Ticket Desk at OMG Zhivago, Shop Street, and The Róisín Dubh.