As we approach the middle of January, all eyes in the political world turned to what promises to be a hectic political year in 2016. At its heart is the General Election, shortly to be called, but we will also see elections to the Northern Ireland Assembly, a possible referendum on Britain's EU membership, and a period of commemorations to mark the centenary of the Easter Rising.

Arguably the biggest event facing Ireland is the referendum on Britain's EU membership, which may take place this year, or 2017 at the latest. A vote for exit would have profound implications for Ireland. Quite frankly it would almost certainly result in Ireland having to renegotiate the terms of its own EU membership (and a consequent referendum on the new terms ) as the close ties between the countries would impact heavily on areas like immigration policy and security.

Even if Britain chooses to stay, prime minister David Cameron has insisted he will require treaty change to give effect to Britain’s changed terms, thereby resulting in a referendum here in any case. Ireland is therefore likely to face a new EU referendum either way in the next year or two. Insider will return to this issue later in the year but for now the big focus is on the General Election. So what then does 2016 promise for the main players?

Insider has commented for some time - even when most pundits felt it was too big an ask - that the FG/Labour coalition would most likely be re-elected, largely owing to there being no alternative. The most recent polls appear to indicate this to be the case, although there may be some flies in the ointment yet that could lead to a different government emerging post-election. Insider has been considering the position of each of the parties with a view to considering what might happen.

FG is the best prepared of any party. While it has not been without difficulties - most spectacularly in Sligo/Leitrim - it has managed a relatively smooth candidate selection process. The party also has a very clear message to sell to the electorate and its candidates are well trained in relaying it. Expect to hear plenty about economic recovery, stability, and long-term economic plans. Expect to hear very little about social services, the health crisis, or homelessness other than that we need a strong economy to fund such services.

The party has a number of additional advantages. The failure of FF to offer any coherent alternative (see below ) and, notwithstanding the emergence of Renua, the absence of any real threat to its right means FG is the only option for a large segment of the electorate. The party also has the benefit of a vote transfer pact with Labour on this occasion and if the Labour vote collapses, coupled with a badly splintered vote, and its candidates are eliminated, this will actually lead to a further seat bounce for FG.

The key for FG is to exceed 30 per cent on the day as this opens up the prospect of a second seat in the four-seat constituencies. It appears on course to do this. While Insider thinks talk of an overall majority is over-stated a seat total in the mid to high 60s looks achievable. 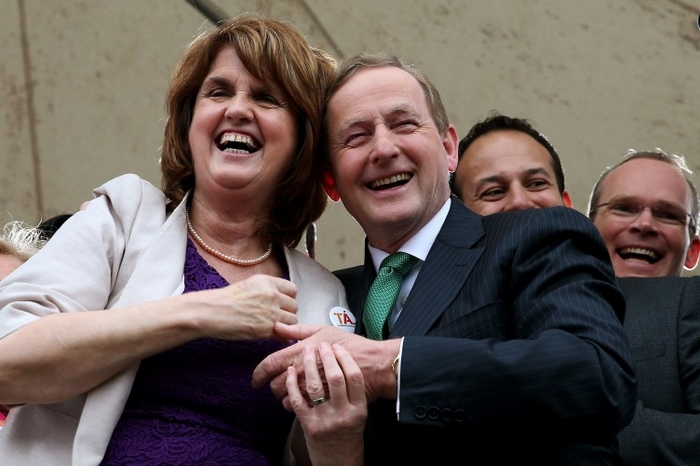 The prognosis for Labour is bleak. The party has recovered a little in recent polls but is still generally below 10 per cent. Even it gets to 10 per cent, the likelihood is that the party will not be the main leftwing player, while poor transfers from smaller left groups is likely to exacerbate losses. The transfer pact with FG is also likely to benefit the larger party, although Labour’s ‘balanced government’ line may help it somewhat.

Party insiders have started to spin the line that 15 seats and a return to government would be a good outcome and that something could be salvaged. That would represent a loss of 22 seats on 2011, an astonishing definition of 'good outcome'. Furthermore seat losses are likely to include cabinet members.

Even if the party were to achieve such an outcome where would it leave Labour long-term? Labour did briefly fall to fourth place in the pecking order behind the PDs in the late 1980s but has never been usurped as the lead party of the left, something that now seems poised to happen at the hands of Sinn Féin. This will be a difficult position to recover.

When we consider that the party would be badly outnumbered by FG, might we even see Labour choose a spell on the opposition benches? This would force FG to look elsewhere in order to form a government.

Insider does not understand the approach FF is taking to this election. In effectively ruling itself out of government (although many still expect it to end up in coalition with FG ), the party runs the risk of being sidelined. It resembles a bottle of champagne that turns out to have gone flat. People may consider some of its policies and arguments during the campaign but at the back of their minds will be the feeling "Who cares, sure they're not going to be in government anyway?" FF failing to provide an alternative is also bad for democracy.

The party also appears to be quite unprepared. Unlike FG it does not have a clear message. It has also run into candidate problems - the sort of nonsense seen in the Roscommon/Galway constituency being the most extreme example. As political pundit (and former party candidate ) Noel Whelan commented recently, FF should lock itself into a room for 24 hours and work out what its message and strategy is.

Most people still expect FF to make gains - with the government parties facing significant seat losses it would be astonishing if it did not - in particular outside of Dublin. Insider thinks so too and the party should emerge as the second largest after the election, but it also risks missing out on some further, winnable, seats, through bad preparation.

SF is a party that gets a lot of media attention with a surge being forecast for it for more than a decade and a half now. The party had a good election in 2011 and really made a breakthrough in the 2014 local elections. Could 2016 be a landmark election? In terms of seats won Insider suspects modest gains resulting in a seat tally in the low 20s is likely on this occasion, but crucially the party is set to build a very solid foundation for future campaigns.

SF is likely to overtake Labour. The other factor is that SF is becoming a real nationwide party. It now has a meaningful presence in almost every constituency and after this election will have a TD or a TD-in-waiting in many of them. This contrasts with Labour, which has never really made it on a nationwide scale; in 2011 for example, half of its seats were won in Dublin and it only won two seats in Connacht-Ulster.

SF on the other hand has its strong base in the border counties and an expanding presence in Dublin but is now showing strongly in other regions. The party is expected to challenge for seats in Galway West and Mayo, giving it far greater long-term potential than Labour. Much of the party’s advances in the North came by tapping votes in areas (especially in the rural west ) where the SDLP did not have reach and SF appears poised to do likewise to Labour in the Republic.

The party will also be looking for a strong showing in the Northern Assembly elections. Its vote in the North has been at best static in recent years however and the continuing decline in the SDLP vote has not really benefited it. Instead we have seen tranches of the SDLP vote abstaining or turning to other groupings such as the Alliance Party, something that has led to a notable drop in the overall Nationalist vote. It will be interesting to see if this trend continues. The renaissance of the UUP was one of the stories of last year's Westminster elections. The question now is, can it eat into the DUP vote? Ultimately though there is unlikely to be any great change in the composition of government.

What about the ‘Others’?

Independents and smaller parties, having turned in a stunning performance in the Local Elections, have been riding high in the polls. Insider felt much of this was driven by a ‘plague on all your houses’ mood and that it would decline as the focus turned to government formation. This appears to be the case, but ‘the others’ are still poised to gain. The Greens, Social Democrats, and Renua will all win a modest number of seats but Independents will be the main beneficiaries. The three Galway constituencies for instance may well return five Independents.

These Independents and smaller groupings come from a range of backgrounds. Insider’s focus is on a group he calls ‘the Noelettes’. These are a group of non-aligned Independents, mainly from FF/FG backgrounds and headed by Galway West TD Noel Grealish, also including Roscommon/Galway TD Denis Naughten. The Noelettes are likely to be Enda Kenny’s first port of call if he needs five or six TDs to prop up a minority government.

Expect a noisy six weeks as the various parties and groupings vie to get their message across in a crowded field.