GERMANY, OR rather, its Chancellor Angela Merkel and finance minister Wolfgang Schäuble, have had plenty to say about, and dictate to, Ireland in recent years, but what have the Irish to say about Germany?

Students of both the Galway-Mayo Institute of Technology and NUI Galway are currently giving a very personal, and individual, take on their impression of Germany - its land, architecture, culture, and people - in a fascinating exhibition entitled Germany Through My Lens.

Students from both institutions were invited by NUIG's Prof Hans-Walter Schmidt-Hannisa, who is also the German Honorary Consul; and GMIT's languages lecturer, Dr Jenny Farrell, a born and bred Berliner; to submit images on the subject of Germany. Among the photos on show is this capture of the Berliner Dom, the city's main cathedral, by Cian Strain (entitled Reflection of Berlin Dome in Puddles ): 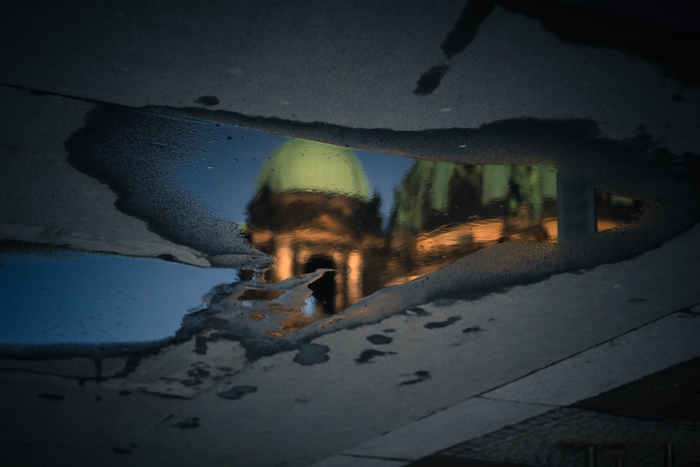 “The outcome is a remarkable and very personal image of a country whose language and culture these students, from all over the world, have studied and enjoyed," said Dr Farrell. “The collection bears poetic testimony to the immeasurable cultural value of international exchanges and experience. The photographs reflect a myriad of facets of the German past and present, and the exhibition is truly worth seeing.”

Germany Through My Lens runs at the GMIT’s Centre for Creative Arts & Media up to and including this Friday. It is supported by the German Embassy and a representative of the embassy will award prizes to the three winners. It is open to the public and will be on display again in NUIG in January.