Insider was going to write an article examining the electoral prospects of some of the politicians in Galway West who will be fighting for the constituency's last two seats, but in the wake of the Paris massacre, writing about an election that is still months away, seems, just now, a little frivolous.

Instead, Insider wishes to reflect on some aspects of the aftermath and reaction to the atrocity, carried out on Friday November 13, by the terrorist organisation, the so-called Islamic State, which left 129 people dead.

This is the last time Insider will refer to Islamic State (aka IS/ISIS ) by that name. To call it such is to confer a kind of legitimacy upon it, an almost de facto recognition that this extremist organisation represents Islam (if that is the case why are millions of Muslims in Iraq and Syria fleeing from it? ), and that it is indeed an actual, legitimate state, a real country. It is an international terrorist organisation. It neither represents Islam's 1.6 billion adherents, indeed it imposes its will upon millions of Syrians and Iraqis in a murderous war of colonisation and extermination of anyone who do not share its violent, nihilistic vision - and that includes Muslims, who are, by far, the greatest victims of Daesh.

Instead, Insider would encourage readers to refer to this organisation by the name Arab states and the Muslim world refers to it by: Daesh. This word is an acronym of the group's full Arabic name - al-Dawla al-Islamiya fi al-Iraq wa al-Sham, yet calling it Daesh is actually a play on words in which it becomes both insult and condemnation, as in Arabic, the term Daesh can mean "to trample and crush" and "a bigot who imposes his views on others". Daesh is what that organisation really is.

On October 17 1961, while the Algerian War of Independence raged, and France struggled to come to terms with the loss of its colonial empire, 30,000 Algerians in Paris marched against a newly imposed curfew on Arab residents of the Paris region. In advance, however, Paris police chief Maurice Papon, an ex-Vichy official, encouraged police to use every means to destroy the demonstration. As a result police attacked the marchers with batons and guns and threw dozens of bound or unconscious men into the Seine to drown. Official reports only admit to 40 dead. The work of various journalists, including Jean-Luc Einaudi, has revealed the actual death toll to be 200. In reading of this, it makes Insider wonder, why the amnesia about this? Why is there a hierarchy of victims? 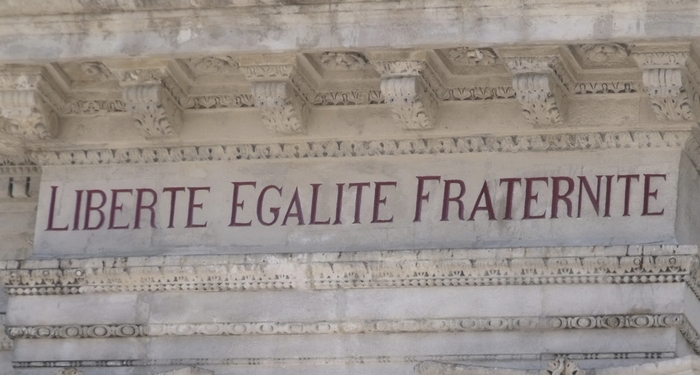 Liberté, égalité, fraternité is one of the world's most famous slogans. Its origins lie in the French Revolution, a simple, yet powerful summation of its goals, and since 1870 it has been the official motto of France. Fraternité, meaning 'Brotherhood'/solidarity with your fellow human, has been much in evidence since last week's massacres. In Galway, some public buildings were lit up in red, white, and blue, the colours of the French tricolore, while hundreds of Galway people, like millions across the world, have changed their Facebook profile pictures so that it now also displays the French flag.

This latter act is a moving, powerful act of solidarity with the people of France, a social media equivalent of Le Monde's Nous Somme Tous Americains headline following the September 11 2001 atrocity in New York. It is one Insider supports and approves of, but yet, it also symbolises that Fraternité is so often interpreted in a narrow, often colloquial way.

There was no outrage or disgust, and little, if any, condemnation of the Daesh affiliated bomb that killed 224 Russians flying home from holidays in Egypt. These were human beings as well. They were our brothers and sisters in humanity. The day before the Paris massacre, some 40 people were killed by Daesh in Beruit, in a sectarian motivated attack against Shi'a Muslims. In October, a Daesh bomb killed 102 in the Turkish capital of Ankara. The dead were mostly young people and Kurds, the latter our allies, a people who put their lives on the line day in, day out, in the fight against Daesh. It was reported, but as it's 'over there' it did not need to have any impact, it produced no real revulsion. In the same month, a number of Israeli civilians were stabbed by Palestinians. Ín reprisals, the Israeli Defence Forces killed around 30 Palestinians. But then that's also 'over there', the Jews and Palestinians are always killing each other anyway.

In total, these atrocities, including the one in Paris, amount to more than 500 people killed in the space of around six to eight weeks. That is +500 of our fellow human beings, our brothers and sisters in humanity, people who were mothers, fathers, sons, daughters, friends, lovers. None of them deserved to die. Excepting the actions in Israel, all were victims of the Daesh terrorists. Not one of these lives lost was more important than another because of the colour of the skin of the victims, their religion, or where in the world they lived.

France has been at the centre of spreading civilised and progressive values across the world since the 1700s. It funded and provided crucial military support for the American Revolution (something the Bush administration and its mouthpieces deliberately forgot during its 'War on Terror' that helped in a large part to spawn Daesh ), while Liberté, égalité, fraternité has become a rallying cry for progressive and humane thought and action the world over.

To uphold the values France has bequeathed the world, fraternité must mean fraternité, all victims of Daesh must be remembered, and their humanity recognised, because this gets to the heart of that other great word, égalité, that all peoples must stand as equals, but also that they will only do so when their humanity is at the front of our thoughts for them, not their religion, politics, country of origin, or skin colour.

And finally, there are those who will seek to use the Paris massacre to demand a halt to allowing any Syrian refugees into Ireland, but to do so is to give in to Daesh, who wish to ferment divisions between the western and Muslim world, creating suspicion and hatred. The Syrian refugees are victims of Daesh, and they are coming to Europe precisely because they see here a continent that seeks to embody the French values of Liberté, égalité, fraternité, somewhere they hope to live free of violence and where they can practice their faith freely, Islam as it is meant to be, not Islam as Daesh interpret and impose it. To sacrifice these values, values France has given to Europe, would be a defeat for Franco-European values and a victory for Daesh. That is intolerable.

Liberté, égalité, fraternité. Defending these values against Daesh is the greatest tribute we can pay to the people of Paris, Ankara, Kurdistan, Syria, Beruit, and those Russian families who never made it home from Egypt.