TOMORROW EVENING, at the former Connacht Printworks in Market Street, sees the opening of the 2015 TULCA Festival of Visual Arts, which ushers out the city’s year-long programme of cultural jamborees in high style. As well as exhibitions, TULCA also hosts talks, debates, film screenings, and numerous events primed to trigger debate and spark palaver.

Entitled Seachange, TULCA includes more than 30 national and international artists addressing issues of the environment and climate change. To coincide with the exhibitions there will also be a series of talks and discussions titled Hy-Brasil Dialogues that will explore different fields of pertinent knowledge on the same topics.

Indeed the legendary island of Hy-Brasil, which was charted on medieval maps and reputed to appear southwest of Galway Bay every seven years, is a thematic touchstone for TULCA 2015. The stories of Hy-Brasil and Atlantis - which legend tells us sank to the bottom of the sea - chime with current concerns about climate change and the threat it holds for our environment.

Galway and Irish artists at TULCA

TULCA 2015 is curated by Dubliner Mary Cremin, whose credits include high-profile stints with the Irish Museum of Modern Art and Venice Biennale, as well as overseeing many individual prestigious projects and exhibitions. In the lead-up to TULCA’s launch she took time out to talk about the festival programme and I began by asking were there many of the featured artists – selected from an open submission call - whose work she had not previously encountered.

“We had over 250 submissions in all so there were quite a few who were new to me,” she admits. “One who sticks out is Owen Quinlan, from Galway, he’s a ceramicist and perhaps wouldn’t normally be in this type of festival, he would be more in the craft line. Owen submitted a piece, Time and Place, which I thought was very much in keeping with the ethos of TULCA. He collected pieces of glass and stones from Galway Bay and beaches and has created a piece about seven feet long, I like that the material has all come from here.

"Another artist, Carol Anne Connolly, also from Galway, is making a book called The Water Glossary about Irish words that are no longer in use that refer to nature. She has made this little book that you can sit down and read, even the word ‘tulca’ is there which means flood. Other artists in the festival who were new to me include Mexican video artist Oswaldo Ruiz whose piece, Dam In The Mouth highlights the history of a dam in the city of Monterrey. Then there are people like Michelle Deignan who is now based in London, and Alan Hughes from Northern Ireland, now based in Manchester, and it is nice bringing back Irish artists who are currently based abroad.” 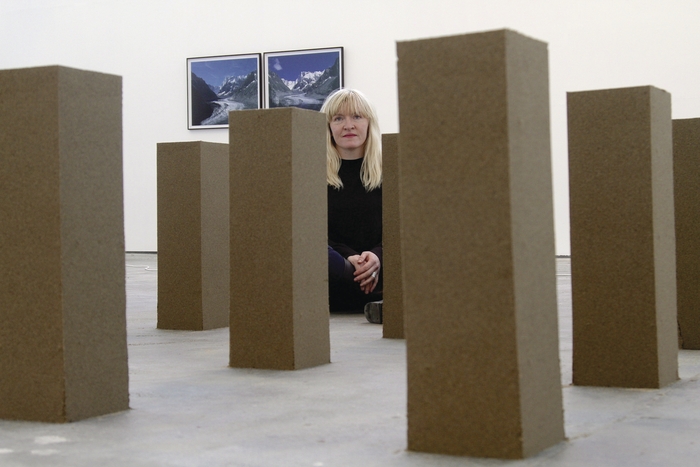 “They have tracked one line of water from beginning to end in its flow through California. That state is currently having major issues with water rights and rivers being diverted or sold to other states and there is massive drought happening so water is becoming this politically contentious thing and a big commodity and Water Gold Soil highlights that.”

Looking through the programme, another eye-catching contribution was Seoidín O’Sullivan’s Orchard System, an imaginative conceptual fusion of apple trees, art, and schoolchildren.

“Seodín worked with Irish Seed Savers, a nursery in Clare that collects indigenous Irish apple seeds,” Mary Cremin explains. “She bought eight apple trees from them and has been working with Lettergesh National School in Connemara. The trees are going to be planted here first in the Connacht Printworks gallery on platforms where Seodín has created mirrored structures where people can relax, sit and talk. Afterwards, it will go to Lettergesh school and the children will plant the trees and they will grow into an orchard which will be the legacy of Tulca and will exist long after this year’s festival is over.”

Orchard System leads Cremin to spotlight TULCA’s lively educational strand; “We have schools touring the exhibitions. It is important for the younger generation to start talking about the issues highlighted in the festival because they affect their future. If it starts a conversation and makes people more aware. The UN climate change conference is coming up in Paris in December. That is important for us because Ireland has not fulfilled all the things it has promised to the UN. Irish people use 40 per cent more energy than most other Europeans which is a lot, I hadn’t realised that myself before hearing it recently.”

Where art and activism meet

Does TULCA 2015 offer a snapshot of current trends in art? “It is where art and activism meets” Cremin replies. “Some of the artists are engaging with social issues, we have artists who are very interested in creating community projects so that entails integrating art in the community and that is a big movement in Ireland at the moment. Other artists like Martin Healy are interested in looking at science fiction which is a genre that looks at what is real and what is not real, and he would draw on people like JG Ballard, referencing his dystopian novels. The majority of the work being shown in TULCA ranges from sculpture to film and photography, there is some painting but the festival primarily features object-based work.”

As well as the exhibtions, TULCA also features fascinating talks and screenings, as Cremin outlines:

“On Saturday we are doing a series of talks in NUIG entitled Hy-Brasil Dialogues with leading geographers, marine researchers, artists, and others. That is an important event as we’ll be bringing people together from different disciplines who are interested in the same thing. On Sunday we have Lillis Ó Laoire and Seaosaimh Ó Guairim doing a series called Island Sessions which will feature Irish storytelling, sean nós singing, and poetry, which all ties in with the theme of myth making. Next weekend, on Saturday November 21, in An Taibhdhearc, we have a free day of cinema screenings including the classic Man of Aran and Werner Herzog’s La Soufriere, amongst others.”