GALWAY THEATRE company Fregoli makes it debut on the Town Hall Theatre mainstage with Pleasure Ground, written by Jarlath Tivnan, who also features in the cast, and directed by Maria Tivnan.

Pleasure Ground is based on ideas around the decline of the rural Irish town. The notions of home, belonging, community, and change are themes Fregoli is always keen to explore, and it was with the winning of the inaugural Michael Diskin Bursary that these ideas became an actuality. The play began to take shape around the town of Boyle, Roscommon, inspired by its playground and recreational area called the Pleasure Grounds.

A group of friends who have gone their separate ways meet back at their teenage haunt, the town park and playground, known as the Pleasure Ground. The town is dying, the Pleasure Ground’s glory has faded, and life has not quite matched up to youthful expectations. Over their night together, buried secrets become unearthed, past grievances boil over, and scores are settled.

Jarlath Tivnan’s writing is witty and sharp, and captures the beauty of rural and small town life while also exploring sadness and isolation. His characters are very much of their generation (born in the 1990s ) but their stories will strike a chord with all.

“It is set in a small town in the west of Ireland in the present day where a young man by the name of David has taken his own life.” Tivnan tells me after rehearsal. “The play concerns four charac, all of whom were David’s classmates in school; Evan, Lindsey, Brendan, and Aisling. They are all connected to David in different ways, some stronger than others, and we discover the connections as the play progresses.

"The opening scene is the funeral and two of the characters have never left their hometown whereas the other two have left, gone to college, and travelled abroad so you have that dynamic when they come back. That is one of the things I was getting at in the play, the difference between the ones who left the town and those who stayed. It is also about how these young people react to one of their friends taking his own life, their confusion and fear, and the sadness and the anger as well that goes through young people today because we can’t pinpoint why suicide is so frequent, especially among young men and particularly in rural Irish towns. 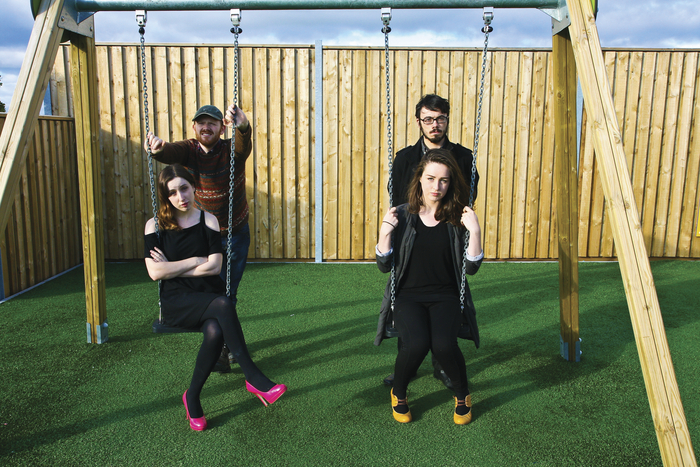 "The play opens at David’s funeral and we get four different perspectives on it from these four characters who we see through their own individual neuroses and personalities. After the funeral scene we see a day in the life of each of the four characters, where they go and what they do after the funeral, and in Act II they end up together in the Pleasure Grounds,the local playground which had been an old teenage haunt where a lot of secrets and dreams and bitterness are revealed.”

Tivnan is a gifted actor, most recently starring in the Galway International Arts Festival production of The Dead School. Pleasure Ground is "my first time writing a play by myself”.

“Fregoli did a show called Home in 2013 and there were six actors in that each of whom wrote their own part, so I wrote my role in that play," says Tivnan. "After doing that piece for Home it whetted my appetite for writing. I hadn’t realised before I would enjoy it so much. It was great for me to be trusted enough by Maria and the company to be asked would I take this show on. It is both a great challenge and honour to take these reins for what is a very big show for Fregoli, our first time ever on the Town Hall main stage. I have enjoyed the process, it has been a lot of hard work and writing is a lonely process sometimes, acting is collaborative and you are bouncing ideas off people onstage, but I have enjoyed it and am sure, or hope, I will do writing again.”

Tivnan expands on the play’s thematic concerns; “Suicide is something where everyone of our generation knows someone who has taken their own life. It is an incredibly sad situation but that is a fact. It is a hard theme to tackle but it is not something that can be ignored. I don’t want to make it sound like the play is entirely sad and morose, there is an incredible amount of humour in it as well. Suicide is one aspect of the play, another aspect and perhaps a more important one, is the idea of community and what community is - be it in a small town, large town or city, people create community. The characters in the play are different from each other and have different ideals but when they are in the same space together they form some kind of bond and it might only be a bond that lasts 24 hours but it is community for those 24 hours.”

Pleasure Ground is on Friday August 21 and Saturday 22 at 8pm. The cast is Kate Murray, Peter Shine, Eilish McCarthy and Jarlath Tivnan. Tickets are available from the Town Hall on 091 - 569777 or www.tht.ie