Cartoonist, painter, poet, novelist, critic, rock musician, punster, polymath, raconteur and wit; Tom Mathews has so many strings to his bow he could open his own archery club.

His painterly side is to the fore in his latest exhibition, Alice In Galway, currently running at the Town Hall Theatre bar and inspired by his enduring fascination with Lewis Carroll’s Alice In Wonderland. Mathews being Mathews, the pictures – colourful and beautifully executed - are also brimful of visual and verbal gags and witty allusions to famous artists, writers, singers, comedians, and cartoon characters.

Tom was born in Dublin in 1952, spending his childhood in Dalkey with his parents and sister. It was an avidly bookish household; “My father was a big reader and pushed me into reading when I was very young” he tells me over an afternoon chat ahead of his exhibition opening.

Inspired by Sylvester the Cat

Where did the urge towards art and cartoons come from? “My old man wasn’t a bad draughtsman but the artistic thing sprung out of nowhere unless it was my uncle Tom who used to draw a few cartoons," Mathews says. "I was fascinated by comics like The Beano and the funny animals on film like Sylvester the Cat and Tweety, Bugs Bunny, and so on. That became a preoccupation and I began copying characters like Sylvester and Tom (I seemed to like cats ). How this led to actually drawing cartoons with gags I don’t know. Of course I always loved humour, The Goons, the Marx Brothers, Laurel & Hardy, all that sort of thing. Somewhere along the line I suppose it’s like I was almost a frustrated stand-up and then had the realisation that I didn’t have to be there, I could just produce the joke and draw a picture of it.”

Mathews was educated at the Presentation Brothers in Glasthule; “They were like ‘Christian Brothers lite’ - you were less likely to be garrotted but it was still pretty rough,” he quips.

After leaving school, Tom worked for two years in advertising before enrolling in the National College of Art and Design. “I hated the advertising job,” he recalls. “One of the first things I found was that, as far as creativity goes, you get about one per cent of your idea through. You might have a brilliant idea but by the time the client has finished messing it around virtually nothing of it is left. So I decided to go to NCAD, as a late pupil, at the age of 23. But after two years there Campbell Bruce, the head of painting, took me in for an interview one day and asked me the name of the course I was attending and I replied ‘Second painting, Campbell’ and he said ‘Where are the paintings??’ - because I wasn’t doing a lot, I was doing a lot of drinking in the morning instead. He said ‘I’ll make a deal with you. I was going to throw you out at the end of the year but you can go now!’ So I left college but by then I was selling cartoons to In Dublin and I discovered I was making enough to live. You didn’t need much to live in those days, about £15 a week, and I was living in a kind of squat so I wasn’t paying any rent. I then began making more money and moved into my own flat and never looked back.”

‘Never looking back’ is an understatement. As well as becoming one of the country’s best known cartoonists, Tom has written a novel, Levon, two collections of verse - The Owl and the Pussycat and No Return Game - revived Myles na Gopaleen’s famous duo in The New Adventures of Keats and Chapman, illustrated more than a dozen books, and has had more than 30 solo exhibitions.

What of his forays into the world of rock music? “I was in a band around 1980 with Justin McCarthy, a beloved figure around these parts who now plays with The Atlantic Rhythm Section,” Tom replies. “Our band was called The Bach Street Kids. I have returned ‘by a commodious vicus of recirculation’ to being in a band again, 33 years after leaving Justin’s band. I am now involved with what remains of The Atrix, there’s Dick Conroy, Hugh Friel, Chris Greene, and myself. I am writing with Hugh, we’ve written six songs each, and just finished an album. I am allegedly singing on two of them - I’m making noises with my mouth anyway!”

Mathews has a large store of entertaining anecdotes of his encounters with sundry famous folk. One such was Spike Milligan.

“When I was 19 and working in advertising on Waterloo Road, in number 57, the Welsh playwright Alun Owen – who wrote the screenplay for A Hard Day’s Night - was living next door in 58," Mathews says. "One day Spike Milligan knocked on the door of our agency, presumably looking for Owen. The door opened and he said ‘Are you 57?’ and I replied ‘No, I just worry a lot’. Some years later I met him again in London, standing outside a little theatre near to where Oh Calcutta! was running. Milligan was playing at this other theatre, and he was sticking up small black and white photographs of himself and writing underneath them ‘Oh Milligan!’ as I was passing. I said to him ‘Hello Mr Milligan’ and he replied ‘Young man who opened the door to me in Dublin some years ago, hallo again!’ So he obviously had a very good memory.

"He took me for lunch to a little Indian restaurant around the corner and we were half way through our curry when he said ‘I hope you don’t mind but I’m being joined by a colleague of mine’. And in came Peter Sellers. I said ‘I don’t mind at all!’ We had a very funny lunch, which for me was mostly just listening. They both left and Milligan told me he was paying for the lunch. As I was on the way out the manager said ‘Very amusing company you had for lunch sir!’ I said ‘That’s right’, then he said ‘Mr Milligan, very generous man; Mr Sellers very mean man, he never leaves tip’ So I learned something about Sellers that day.” 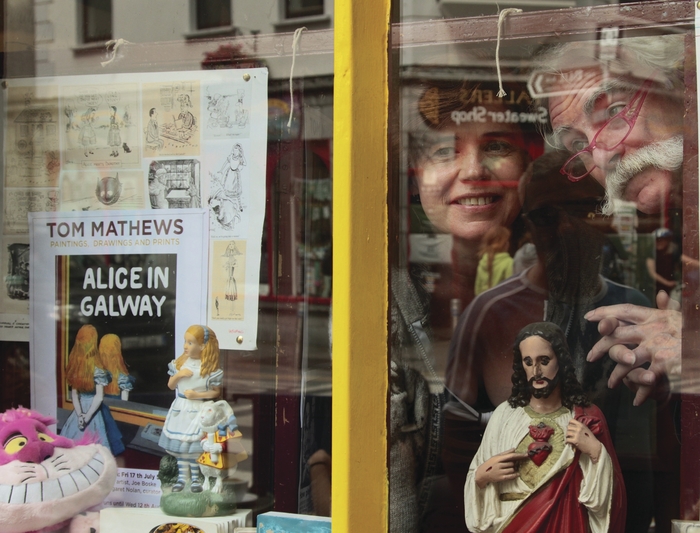 And so to Alice In Galway. “One of the first things I remember is my father reading the Alice books to me and they had a strange fascination for me which they retain to this day,” Mathews reveals. “I can also remember him reading the books to my nephew Bill who is now 30, so my father, who is now 93, never lost interest in it and nor have I. That was the initial seed but I have always found it fascinating. It is an extraordinary book and this year is the 150th anniversary of its publication.”

“Alice In Wonderland was my introduction to surrealism and I am a great fan of surrealism,” Mathews continues. “Andre Breton, a founder of the Surrealists, said that anyone who embarked on that dangerous endeavour must acknowledge Lewis Carroll as their ‘first master of truancy’. They loved the madness of the books. Max Ernst said Carroll was his favourite author. Both Ernst and Dali illustrated the book, so it had a huge influence on them. It has also been translated into practically every language, including Irish. Vladimir Nabokov translated it into Russian and it was banned in The People’s Republic of China in the 1930s on the grounds that it demeans people to pretend animals can talk.”

Tom expands on the content of Alice In Galway; “I did an exhibition of illustrations for Alice in 1992 and now, 23 years later, I decided I had not got it out of my system so I started painting and in nine months produced the 23 pictures that are in the show. I used, as my jumping off point, Tenniel’s illustrations from the original publication and I have adapted them into these strange surrealist paintings. I have put Alice into situations that she is not in in the books and I have utilised various devices of Magritte in particular in the pictures. It’s an amalgam of all the things that interest me, so there are also rock’n’roll and film references there.”

In conclusion, Tom stresses that, for all their clever allusions, the paintings appeal to children as much as grown-ups; “Just like the Alice books I think a lot of these can be appreciated on several levels, I think children will find these paintings attractive – they may not understand the subtler references but they are funny little pictures with funny animals and Alice so I think kids will like it as much as adults.”