WRITER AND performer Pat Kinevane comes to the Town Hall Theatre on Tuesday, June 23, at 8pm with his latest acclaimed solo play, Underneath. Presented by Fishamble Theatre Company and directed by Jim Culleton, this remarkable piece premiered in December 2014 and is now on a national tour.

Underneath is a blackly comic, rich, and vivid tale of a life lived in secret, a testament to the people on the fringes, under the noses of everyday life. It explores the surface and what lies underneath. After she is struck by lightning as a child, a woman grows up disfigured. Sticks and stones did not break her bones, but words and pointing crushed her. Is beauty really only skin deep, or does ugliness hide somewhere deeper?

“I started writing it about three years ago, jotting down notes,” Kinevane tells me. “I was drawn to the theme of the obsession with perfection that is in the media, the pressure that is on young women and men to look a particular way. There is a lot of focus on the shell rather than what is inside the shell. I started to think about somebody who, facially, was different to everybody else, how that affects their self esteem, and how they survive in the world if they looked different. This character started to come to me and I was fascinated by her, and her journey in order to maintain her dignity, and her soul in a world that for her, has become particularly cruel and judgmental. I then talked to Jim Culleton about it and he encouraged me. I started to work with him and the company, and it slowly came together.”

Kinevane’s relationship with Fishamble began with his first play, The Nun’s Wood (1998 ) and continued with The Plains of Enna (1999 ). In 2006, Fishamble produced Pat’s first solo play, Forgotten, followed in 2011 by his second solo play, Silent, both directed by Culleton. I ask him whether he views the three solo plays as a trilogy and if they have elements in common.

“I kind of treated them like albums, they were different chapters in my life,” he replies. “I never planned on doing a second or third play. In that sense I don’t see Underneath as the completion of a trilogy but at the same time I know it is. What it has in common with the others is what’s going on inside my head and there is a thread running through them, it’s talking about things that people find it hard to talk about and speaking up for people who can’t speak for themselves. The plays are connected by characters who are on the margins of society but independently they are different from each other.” 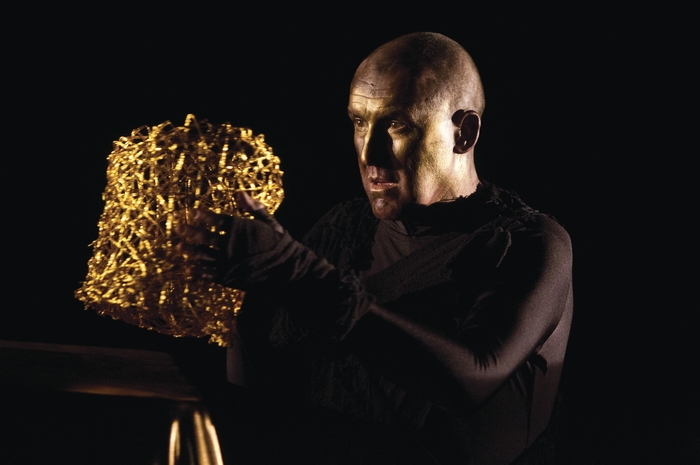 The publicity shots for Underneath feature Kinevane’s head in striking blue/black make-up. He explains how the look came about. “The character in the play is dead, she tells us this at the start and she is speaking to us from her home in the ground," he says. "I had an image in my head of someone who was race-less and somehow leathered by death and in that sense connected to all their ancestors whether European, African, or Egyptian. There is a big Egyptian thread in the piece, I kind of saw her as being like Nefertiti. I worked with Zoe Clarke, who is a remarkable make-up artist, and we spent a whole day building up the image with her and photographer Ger Blanche, and Catherine Condell who was styling it. It was a group effort.”

Kinevane is a native of Cobh. He has worked as an actor in theatre, film, television, and radio for 25 years. Both his previous solo shows have been performed extensively throughout Ireland and internationally, and Silent was an award-winner at the Edinburgh Fringe. He tells me about the creative dynamic that has sustained his long and fruitful partnership with director Jim Culleton.

“I first worked with Jim in 1993 when he cast me in a show," he says. "I was immediately able to communicate with him and found him very kind. Some directors can be very tough and as an actor you can feel quite exposed and I don’t like that anymore. As a young actor you roll with the punches but I am 48 now, and when I started working with Jim on the solo plays I decided I wanted to work with someone who was good at what they do but also kind. I first wrote for him in 1998. We healthily tease things out and healthily argue but we have each other’s self-esteem and creativity to protect and we do that. And we laugh our heads off in the rehearsal room and that is important to me as well. Working with Jim I feel like I’m being looked after.”