CHAROLAIS IS an age-old tale of female rivalry with a new twist: the other ‘woman’ is a purebred Charolais heifer. A farmer devotes considerable attention to his prize heifer at the expense of his very pregnant girlfriend Siobhan, who in turn has developed a homicidal jealousy for this Charolais and is feeling equally murderous towards her snobbish soon-to-be mother-in-law.

Writer and actor Noni Stapleton, who recently starred in Sky Atlantic’s Penny Dreadful, comes to the Town Hall Theatre on Friday June 12 at 8pm with her award-winning solo play, Charolais, a dark comedy of love and longing. Rarely in Irish theatre has farming life and the joy of sex been expressed so frankly or with such charm.

Produced by Bigger Picture Projects and directed by Bairbre Ní Chaoimh, Charolais was first performed at last year's Tiger Dublin Fringe where it won the Bewley’s ‘Little Gem Award’ and garnered rave reviews, The Irish Times hailing it as ‘a fast-paced, witty, and intensely emotional tale filled with laughter, loss and despair’.

“I didn’t sit down and decide to write a play about the rural community or a farm or a cow,” Stapleton tells me ahead of her Galway visit. “What happened was I was improvising one day when I was alone in my mum’s kitchen. I started speaking in this character voice and the very first monologue in the play literally just poured out of me. I’m not sure where it came from, but I knew straightaway it was worth hanging onto. Stories are important and the value of simple stories well told has been instilled in me since I was young.”

Stapleton expands on the play’s central character, Siobhan, and that of her four-footed rival. “Siobhan is a townie and is quite a lonely person. She is very practical and unsentimental but is longing for love, companionship, and family, which a lot of people will identify with, but the way she goes about getting those things is very out of the ordinary. To her it seems completely normal that if there is another female on the scene, albeit in the shape of a Charolais heifer, then you get rid of the competition.

"Siobhan is also pregnant and is very put out that this Charolais heifer is getting far more attention from her farmer boyfriend than she is. The Charolais’ pregnancy is of much more importance to him than her own. I also portray the Charolais heifer in the play. She fancies herself as a bit of an Edith Piaf, she’s all cow but she is a very sexy heifer. She imagines herself in a French cabaret club and she sings all the French classics!”

Life on the farm 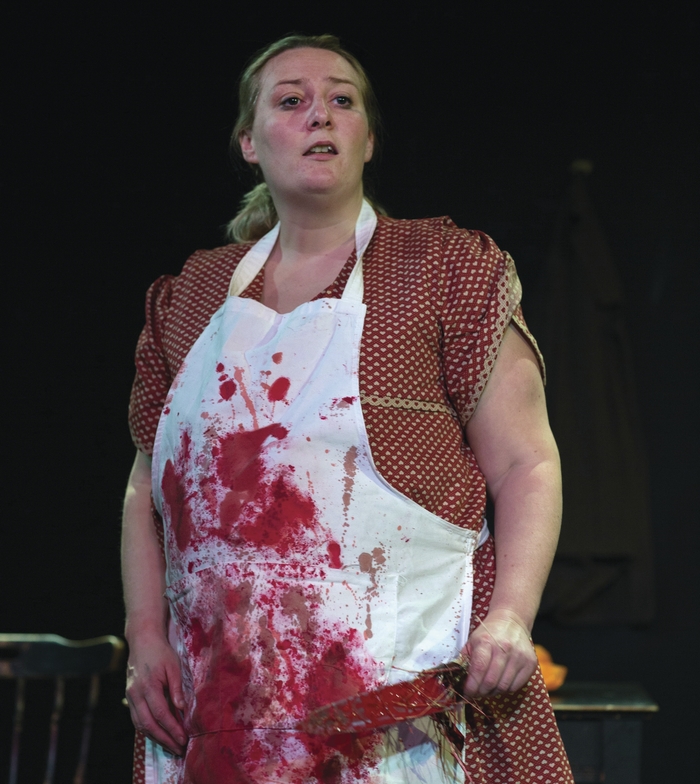 Like Siobhan, Noni herself is a townie and she did considerable research in writing the play. “I was very lucky to be introduced to this farmer and his family who were willing to tell me all the details and give me an insight into farm life, as opposed to just the facts and figures,” she tells me. “One of the things that struck me was how delicate the animals are, they can literally fall over dead for no reason. That made sense to me how within the story the farmer is so protective of his prize-winning heifer. Another thing I found very moving was the connection between farmers, their animals, and the land. It’s unsentimental but each time an animal gets sick, forgetting about the money aspect, there is a real sense of drop everything immediately and focus on the animal.

"The farmer told me how in the 1980s his herd was wiped out by TB. The way he spoke about it was very moving and even poetic; he talked about how there’d be no reason to get up in the morning if you didn’t have your animals on the farm; there’s no gate rattling, no cows calling, no need to start the tractor. That really stuck with me and I thought ‘I have to put this into the play’ and I think the play is better for it because, while it is very funny and dark, there is a real earthiness as well and those kinds of moments really helped.”

Stapleton enjoys having audience members from farming backgrounds come to the play. “I’ve had lots of farming people come to the play," sher says. "They come up afterwards and ask am I from a farm and it gives me great delight to tell them I’m actually a townie. I love when there is a mix of a rural and urban audience because everyone gets the jokes and the story but I can hear that ripple of recognition from the farming community when I mention things like the herd register or the area aid map.”

Even a cow came to watch

She also had a comical life-imitating-art experience with the play last month. Charolais was being performed in Dingle Mart as part of Féile na Bealtaine when a real cow suddenly wandered into the playing area mid-performance. “It was only for about two minutes but it felt longer than that, time seemed to slow down,” Noni recalls with a laugh. “It was surprising alright but I thought, if I panic anything could happen and if I stay calm we’ll all come through it. A lot of the audience thought it was staged.”

Charolais is Stapleton’s third playwriting credit, following One for Sorrow and Two for a Girl, where she played multiple roles in both. Two for a Girl was nominated for the Jayne Snow Award at the Dublin Fringe Festival and also went to New York. Charolais marks another step forward in her writing and she is quick to acknowledge the input of her collaborators, notably director Bairbre Ní Chaoimh.

“I first worked with Bairbre on Aisling Ghear’s production of An Triail in 2012 and we immediately worked very well together,” Stapleton reveals. “We became friends after that and Bairbre was pushing me to work on a new piece of writing that we could work on. I read her the first draft of Charolais and she was really inspirational in making me write the play because she wouldn’t let it go. She immediately said ‘There is something in this, you have to keep writing it.’ She tortured me into doing it but it’s really important to have people like that encouraging you and she was very significant in the writing of Charolais. Also, Miriam Duffy who did the costumes and composer Jack Cawley both did a phenomenal job. Jack’s music really lifted the French Charolais section.”

While Stapleton’s playwriting and stage performances have been winning her much attention, so also has her screen acting. Roles in the likes of Ripper Street, Quirke, and The Tudors have been topped by her recent run in the Showtime USA/Sky Atlantic series Penny Dreadful in which she played Gladys Murray, wife to Timothy Dalton’s Sir Malcolm Murray.

“Penny Dreadful has been my most satisfying TV role up to now, purely because it is such a huge machine, Hollywood has pretty much come to Bray,” she admits. “It was a massive opportunity to work with that calibre of writing and other performers and crew. And when Timothy Dalton is your co-star you just hope that some of the acting genius will seep into you in some way. It was incredibly satisfying and I learned a lot from it and I’d love to do more film and TV. And to see the finished product, we are now half way through season two, it is just astonishing to watch. I feel so lucky to work with people who are at the top of their game.”