ON ONE day of the year, the teenagers were let run riot in the monastery, adolescent apprentice monks could dance, sing, clap their hands, shake their tonsures, boss around their elders, play cards in church, and stage a riotous show where an altar could explode, hide and seek games ran into the wee small hours, and the elders had no choice but to let them away with it.

This is the background to Ludus Danielis - The Play of Daniel, the 12th century "mediaeval opera", based on the biblical stories of Daniel, originally staged by adolescent monks in Beauvais Cathedral in northern France. Now it comes to Galway for this weekend's Galway Early Music Festival.

The show, a mixture of liturgical song, drama, and anarchic antics is being staged by the distinguished early musician Andrew Lawrence King, his Harp Consort, tenor Wolodymyr Smishkewych, and the St Nicholas Schola Cantorum, in St Nicholas Collegiate Church this evening at 8pm. Andrew is no stranger to the GEMF which he describes as "a high quality early music festival which stands again any other such festival in other countries".

"The very special thing about the Galway Early Music Festival," Andrew tells me during our Thursday morning interview, "is the combination of the interesting visitors coming in, the interaction with local musicians, and family events, and the setting within a mediaeval city. It makes you realise the depth of history around you. We're aware of that every day rehearsing in St Nicholas'. We're bringing in this opera from 1200 and this church was here - not in its present form, but in an earlier form - at the same time, and music like this was probably being sung in St Nicholas. St Nicholas is also the right size of church for this show as its size is around the size Beauvais Cathedral was when Ludus Danielis was first performed."

Another link between the show's past and this modern performance, comes through the youngest performers taking part - the children and young people of St Nicholas Choistors. "This is the special thing," says Andrew. "The original performers in Beauvais were young people and they had the principle role. They were all children up to their early 20s."

When it was originally staged, Ludus Danielis was very much about young people. It was divised by them and was about allowing them an opportunity to cut loose and let off steam in what was otherwise a highly ordered, austere, and strict environment.

"Monastic life was a very controlled, hierarchical, single sex, pressure cooker environment," says Andrew. "This was the one time when you were allowed, even expected, to be naughty and cut loose, but within a framework the church could still accept. For that one day, they were allowed run the cathedral. Although the show had a religious purpose, there was also a lot of fun as they were let do things they could not do in church and get away with it."

In keeping with that spirit, this evening's show will feature children dressed as mediaeval knights with swords and shields, and according to Andrew, "angels, who must have wings, will 'fly' to the gallery in the church", prophets dresed in black, a king wearing bishop's robes.

"There wil be constant movement, there will be 10 or 12 processions around the church, with the cast each time playing different roles," he says. "It's a very high energy show. There will be swords and spears, kings, heros, battles, suspense, the altar will explode and at one point the choir master will have to play a donkey and let one of the choirstors sit on his back and carry them around. There will also be a hide and seek game. The original production would have happened about one o'clock in the morning when the abbey would have been in darkness. Can you imagine playing hide and seek in that? It would have gone on for hours. Our production though will run for just about an hour."

As Andrew points out though, underneath all the tomfoolery and fun, Ludus Danielis had a serious moral, and a message for all involved, one which remains relevant today.

"Daniel is a biblical story but its message is primarlily ethical," says Andrew. "The message of Daniel at the feast is that you should enjoy yourself but it does not call for you to disrespect other religions and ways of life. Daniel's imprisonment for worshipping God makes the point that it is not the job of the sate to makes laws dictating what religion should be followed, people have the right to freedom of conscience on such matters. Those messages were applicable in the Middle Ages and they still ring true today.

Clap your hands, sing out loud 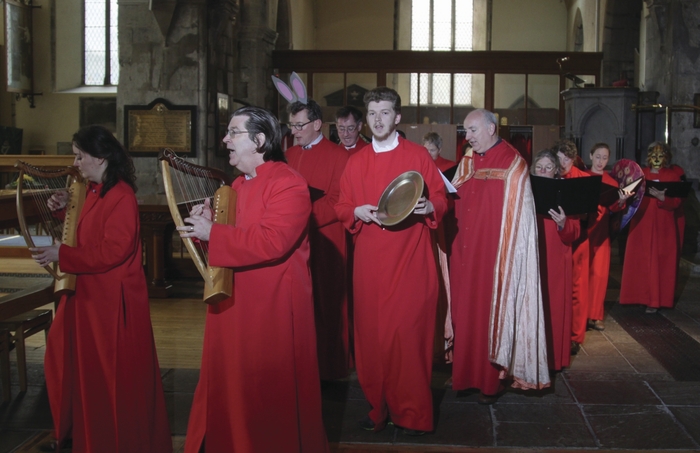 Ludus Danielis has been a passion of Andrew's since discovering it as a university student. "It's the biggest and best of the liturgical dramas of that period," he says. He was attracted by how it took the devotional and processional aspects of the traditional liturgical dramas of the time, but invested it with an unprecedented level of high quality song and music, as well as action and mischievous humour. Returning to his native Guernsey, he staged the work "with a local choir" in the early 1980s, and since then has returned to the work numerous times, with notable performances in King's College Cambridge and Yorkminster.

Each performance, Galway included, is not only based on the original text of Ludus Danielis - featuring vocal notation for the songs and stage directions - which were used by the mediaeval French monks, but also adds the latest academic research, giving the actors and musicians more scope for their performances. Although a musical score no longer seems to exist for the play, Andrew argues that Ludus Danielis is full of different genres, changes of pace, rhythm, and style, all of which can be discerned from the original text itself.

"Ludus Danielis appeals to both the family and the academic. It's a great music work, a masterpiece, but also one with catchy tunes. It's approachable," he says. "What you see on the page, rows of dots on lines, looks like standard plainchant notation, but when you look more closely, there are different styles of music hidden within the notation. Clues are also in the rubric, the red lettering giving instructions, like stage directions. This tells us they were using instruments.

"When you see the word prosa, that is for a procession to take place, meaning the accompanying song should be sung in rhytmic verse, for walking, not as a chant. Another piece we see the rows of dots are busier on the page, more active, meaning the tempo changes again and that there should be singing and clapping of hands. Another section is in the form of a serious song and that is the moment where Daniel explains what the writing on the wall means. As we don't have all the information on the music, we can know more from what the text fills in. The words give a clue to what kind of music it is. You decode the musical notation in this way."

Tickets for Ludus Danielis can be booked through www.galwayearlymusic.festival.com and are also available on the door.