See the best of Irish films on stage in a new season of films celebrating Irish culture and literature, Thursdays at the Taibhdhearc.

Irish filmmaking was given a boost by the launch of TG4 in 1996, giving voice to a new generation of filmmakers in Irish who went on to win many awards here and abroad for films and feature documentaries. This represents almost 20 years of telling stories on film, and the Taibhdhearc is giving people the chance to see them again on stage.

There will be post-show discussions with the producers at each event, including many special guests. The Taibhdhearc welcomes lovers of the language and all films buffs out there to go along to Thursdays in the Taibhdhearc at 8pm.

The season kicks off with the award-winning O’Conaire - An Fear, on Thursday August 28 at 8pm. The film follows the life of Padraig O’Conaire, that little guy who used to sit in Eyre Square with his ‘asal beag dubh’. Watch actor Diarmuid de Faoite bring him to life and perform some risqué scenes in the middle of Shop Street. Diarmuid and the film’s producer, Johnny White, will be on stage after the event for questions and answers. 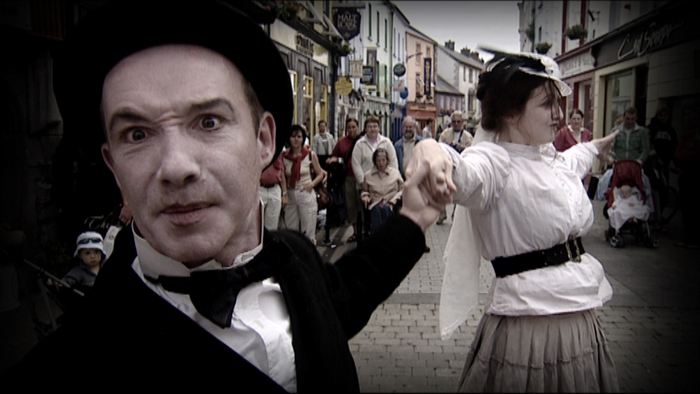 On Thursday September 4 there is a very special screening of Draíocht, starring Gabriel Byrne, first shown on the opening night of Teilifís na Gaeilge on Halloween 1996. The film was written by Byrne, who plays a soldier coming home from the Congo. Charlotte Bradley also stars. After the showing, producer Gerry Mc Colgan will talk to Anne McCabe, then commissing editor with TG4, about the making of the film which was directed by Áine O’Connor.

Throughout September and into October, Thursdays at the Taibhdhearc, Scannáin ar Stáitse/Films on Stage, continues with John Huston, about his time in St Clerans, Craughwell; Siobhán, about Galway actress Siobhán Mc Kenna; Cré Na Cilla, based on the famous book by Máirtín Ó Cadhain; and Scéalta O Theach na mBocht (Tales from the Poorhouse ), directed by Louis Lentin and starring Brendan Gleeson, Mick Lally, and Ruth Mc Cabe. There is a documentary about the director of Man of Aran, Robert Ó Flaherty, entitled An tEireannach Fáin, and then Bob Quinn’s classic comedy, Poitín.

All films and documentaries will be sub-titled unless otherwise stated. These events are made possible with the kind support of TG4. The price of admission is €8, and season tickets are available.

For more information contact An Taibhdhearc on (091 ) 563600, email [email protected], or visit www.antaibhdhearc.com