WERE IT not for Eric Bell, Thin Lizzy may never have happened. It was the Belfastman’s idea to form the band and an imporpmtu meeting after a gig in Dublin convinced Phil Lynott that Bell’s idea was a good one.

Eric Bell, one of the finest guitarists to ever come out of Ireland, has had a remarkable musical career which has seen him work with Van Morrison and Bo Diddley, and create one of the signature riffs and solos of classic rock in Lizzy’s ‘Whiskey In The Jar’.

Eric was born and raised in Jocelyn Street in post-war East Belfast. Like many who grew up in the austere 1950s he describes it as “like living in black and white or like an old sepia photograph”. For youngsters of Eric’s generation, life changed dramatically when Lonnie Donegan and the skiffle craze intruded onto radios across Ireland and Britain. “The first time I heard Lonnie Donegan was the turning point in my life,” he says. “I just could not believe the way he approached music and he was one of the great singers.”

Bitten by the skiffle bug, Eric, like many teens in the 1950s, wanted a guitar, and eventually his parents bought him one as a Christmas present. Guitar playing quickly became an obsession. “My family and friends would say to me ‘What are you going to do? The guitar is fine, but you’ll never make a living out of it.’”

During this time Eric developed his own distinctive style - a combination of soaring melodies, stinging licks, and dramatic solos - which would be fully realised during in Thin Lizzy. “I listened to Hendrix and The Yardbirds,” he says, “and to the Bluesbreakers album with Eric Clapton. I listened to Django Reinhardt was mesmerising, so melodic and free-form with it. I liked people who played in a melodic style like Hank Marvin and Les Paul.”

Them and Van Morrison

Eric attended Orangefield High School in East Belfast where his contemporaries included Van Morrison. By the mid-1960s Van was a sensation in Ireland and Britain with Them, who had scored hit singles with ‘Baby Please Don’t Go’ and ‘Here Comes The Night’. By 1966, Van was on the lookout for a new guitarist.

“I was in Quimbo’s music shop where every musician in Belfast seemed to be in on a Saturday afternoon,” says Eric, “not to buy anything, but just to hang out, talk, and try and get gigs. Van walked in and the whole shop stopped and he looked at each of us and then walked upstairs. About five minutes later he came down with the sales man, who pointed in my direction. Van came over and says ‘Hey, can I speak with you for a minute? I’m Van Morrison. What are you doing next Saturday?”

Van had just recruited Eric for a very important gig. Them were the headline act for the opening of The Square on Belfast’s Royal Avenue. On opening night there were crowds waiting to get to what was the city’s new ‘cool spot’, but the gig itself was to be a baptism of fire.

“All the way out the street and up two flights of stairs were people waiting to get in. Half of Belfast was at it,” Eric says. “I had written the set list on my amp and was psyching myself up and when we began Van says to me ‘Start a blues in E, man!’. I said ‘What about the set list?’ ‘F**k the set list! Start a blues in E, man!’ We started playing it and you just had to follow. I only played, maybe six gigs with Them, but every one was an experience.” 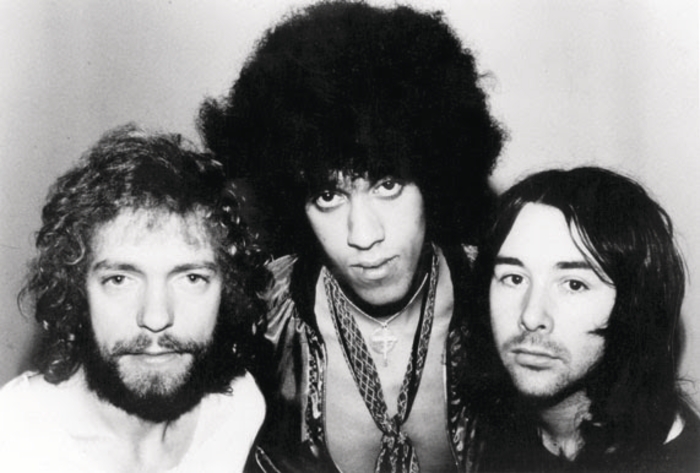 Following his stint in Them, Eric auditioned for a showband but getting the gig meant a move to Dublin. The showband paid a regular wage, but on nights off, Eric would check out the city’s underground rock scene and one night saw Skid Row, featuring Brush Shields and Eric’s old friend from Belfast, Gary Moore.

The experience convinced Eric he needed to form his own band. His initial attempts met with limited success, until a chance meeting with Phil Lynott at Dublin’s The Countdown Club.

“This band was on called Orphanage with Phil on bass and singing and Brian Downey on drums. Brian was so good I thought ‘Imagine having a guy like that in the band’,” says Eric. “I went into the changing room, Phil and Brian were the only ones there. I asked if they knew anyone who would be interested in forming a three-piece and they gave me the names of pubs around Dublin where musicians hung out. I was just leaving when Phil called me back. He turned to Brian and said ‘Do you fancy forming a group with Eric?’ Brian said ‘No’, but Phil said ‘Let’s form a new group. Orphanage has gone as far as it can go’. Thin Lizzy was formed.”

Thin Lizzy quickly became a sensation in Ireland. “It took about four months and we started playing to huge crowds,” says Eric. “Within about six, we were the top band in Ireland. Next minute we were over in London recording an album.” Lizzy’s first three albums - Thin Lizzy (1971 ), Shades Of A Blue Orphanage (1972 ) and the magnificent Vagabonds Of The Western World (1973 ) - did not sell well, which was puzzeling given the excellent music they contained. Phil Lynott’s songwriting was at its most eclectic and uninhibited and Eric’s guitar playing was astonishing. “It was very hard for us,” says Eric. “We went from being a big band at home to having to start all over again from the ground up. Nobody knew us in England. It was frustrating.”

Eric quite Lizzy on New Year’s Eve, 1973. Three years later, Lizzy would achieve major global success with Jailbreak. However the ‘Eric Bell era’ is now receiveing long overdue recognition. “It has only been in the last three years, with the re-release of the first three albums that there have been critics saying ‘These are excellent’. I got a call from Hot Press saying British prime minister David Cameron called ‘Whiskey In The Jar’ one of the great classic rock singles. It’s nice there is now an interest in those albums.”

After Lizzy, Eric worked with former Jimi Hendrix bassist Noel Redding; Main Squeeze, featuring a host of former John Mayall alumni; and playing as part of Bo Diddley’s band. Since the 1990s Eric has toured and released a number of solo albums, most recently Belfast Blues In A Jar. What keeps him passionate about playing music?

“It’s extremely important to me,” he says. “I’m 64 now and I take my hat off to the Rolling Stones who made it possible that guys my age can still go on stage and play guitar. It’s great. It gives me something to get up and do. I love it. It’s probably the only thing I can do - my wife says I’m a one trick pony - but I found I can keep doing it and do it well.”