STEPHANIE KLAPP, MA Culture and Colonialism NUI Galway, history teacher, and local historian, recalls the story of a fellow German who made Galway his home, but found himself caught up in the 1916 Rising and wrongly humiliated on the streets of Galway.

Within all the commemorations, vigils and lectures in the context of the Easter Rising and the subsequent War of Independence, there is one man not afforded the attention his memory deserves. On the few occasions where he is mentioned, he is usually described as being in his seventies, frail by implication, and his untimely death following his release from a British prison, not directly connected to events.

Professor Valentine Steinberger, a native of Bavaria in Germany, and professor at Queens College in Galway, was unwittingly caught up in the aftermath of the failed Rising in Galway, and, along with his colleague, Professor Walsh, found himself incarcerated.

Contemporary newspaper articles tell a compelling, thrilling tale of German U-boats, dubious light signals coming from the Steinberger family residence in Salthill, overlooking Galway Bay, and a German professor with links to the Irish Republican Brotherhood. Echoes of Roger Casement and German arms smuggling reverberated through the City of Tribes, mingled with increasing hostility against the Kaiser and the rebels. As police arrested Steinberger at his home, he was reportedly in his garden tending to his plants, and his wife Eliza visibly upset by his arrest. 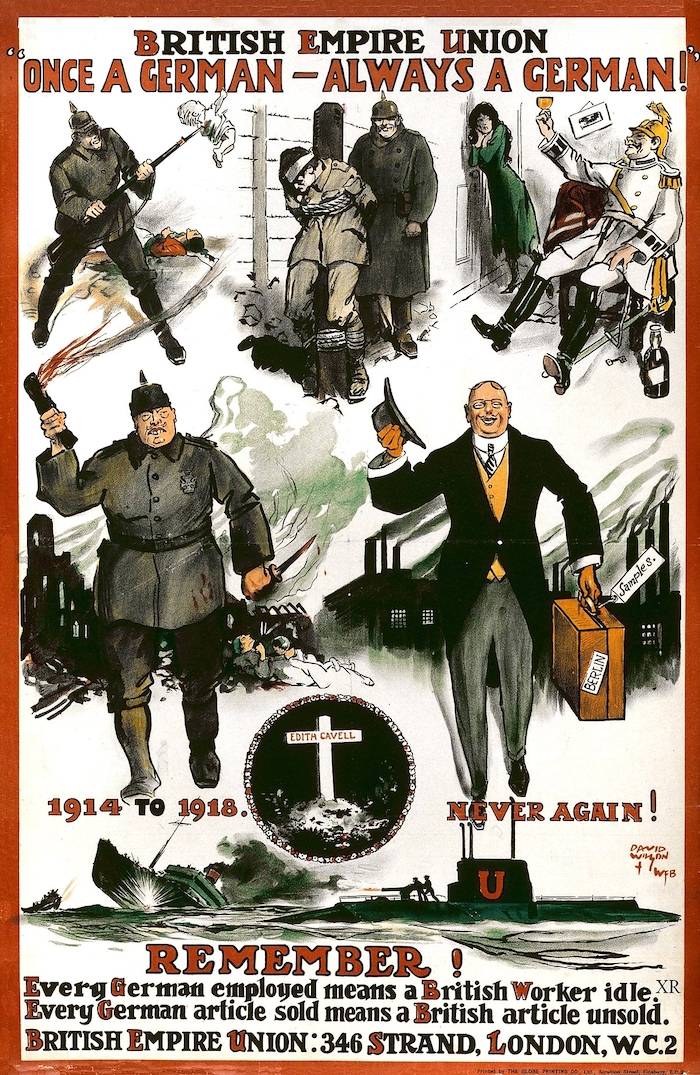 What happened next is a dark episode in Galway history.

Along with the other arrested men, Steinberger was marched through town where people hissed, jeered and spat at them, but Steinberger was, as a reporter for the Connacht Tribune pointed out, at the receiving end of particular venom, no doubt a result of his German roots. As hard as it is to imagine after witnessing the celebration of the Easter Rising in 2016, but contemporary sympathies lay not with the rebels or the rebellion, which many newspapers deemed a German plot. Valentine Steinberger had ceased to be the kind, popular teacher, and become the despised German instead.

How had it come to this, one might wonder, that an upstanding, popular member of society found himself treated thus? This was a man who was held in great esteem by his students, who had been naturalized in 1913 and was, in modern terms, “well integrated”.

Since his arrival in Ireland, he had established himself as a successful language teacher in Belfast before taking up a prestigious post at Queens College Galway. On a personal level, he had married an Irish girl from Coleraine, Eliza Ferris, sister of a local priest, with whom he fathered four children – Cecilia, Charles, Fritz and Lilith.

They lived in modest prosperity first in Bushy Park, then Salthill, with a domestic servant and a small family dog. He was frequently in attendance at public meetings, where he spoke of the long, deep connections between Germany and Ireland, most notably Irish monks promoting Christianity in Germany after the fall of the Holy Roman Empire. One newspaper clipping tells us he won a “fat sheep” in a raffle, and he contributed to funds for a Catholic Cathedral in Galway. 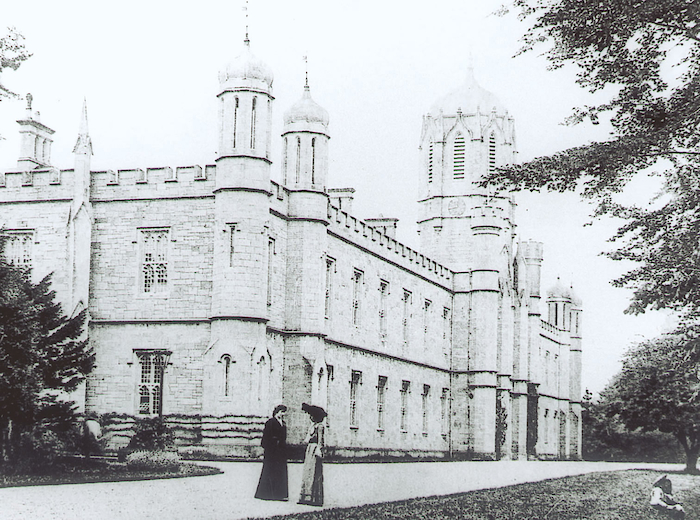 On the surface, his was a success story, a man navigating the changing landscape of Europe to find a new home in a country that he loved, but on closer inspection it becomes obvious the dark clouds of impending doom had gathered some time before fate struck.

Comparing census records of 1901 and 1911, one immediately notices that his younger son, named Fritz in his birth register, changed his name to the Anglicized Frederick in 1911, and while in 1901 Steinberger had given Germany / Bavaria as his country of origin, in 1911 he simply wrote Bavaria. In 1901, the family had in their employ a domestic servant girl from Germany.

Yet, in 1911, a local work was registered as working for them. Viewed within the context of rising anti German sentiment sweeping through mainland Britain and Ireland, it tells a tale of a family well aware of their precarious position should Britain go to war with Germany and Austria.

Sadly, their trepidations came to pass, as Steinberger was reported to British authorities by fellow Galwegians, neighbours, possibly people he had known for years. While University College Galway petitioned the British authorities for the release of Professor Walsh, they chose to do nothing to intervene on Steinberger’s behalf.

It was through his wife’s continued efforts with the former Under Secretary Sir James Dougherty that he found himself released in late May. His release was subsequently questioned in the House of Commons on the 2nd of August of 1916, by Mr Coote, to the Home Secretary.

Yet while a writer for the Tuam Herald flippantly observed on 3.6.1916 that Steinberger was not “the worse for wear due to his ordeal” and it is on record Steinberger returned to work immediately, relaying to his students he was treated well, this narrative is at odds with the many witness testimonies delivered by other Irish prisoners such as Commander of the First Brigade, Brian Molloy from Castlegar and Frank Hardiman, treasurer of the IRB.

Here we hear of scarce food rations, drafty cells and harsh treatment. From Hardiman we hear that on board the HMS Snowdrop where Steinberger and other captives were originally held, over 20 prisoners were placed in cells designed for no more than one or two, without ventilation. They crossed the seas in open freight carriers, and it is reported Steinberger shouted “This is murder!” in protest at this ill-treatment.

This was, after all, internment without trial or actual evidence. At the very same time, Steinberger’s oldest son Charles was serving in the British navy, having volunteered for duty. What this young man’s motives were as an Irishman born to an Irish woman and a German father, to take up arms against the country of his father’s birth, is unclear, but it must have been hard for him to reconcile his bravery and commitment with the scandalous treatment his father received.

Steinberger’s death from pneumonia on November 3 1916, just a few months after his release from Wandworth prison, received much media attention, as did his widely attended funeral. It is a reasonable assumption that many of the same people who joined the outpouring of grief over Steinberger’s demise would have been jeering him six months before, as he was humiliated in the streets of Galway. Nobody seemed to find it appropriate, however, to publicly suggest a connection between his untimely death at merely 63 years of age with the trauma of his arrest and imprisonment. 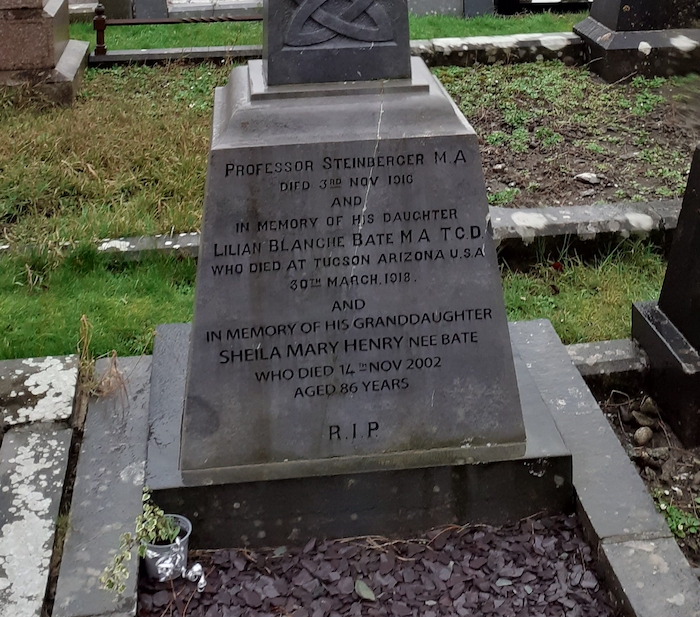 It is perhaps no coincidence that all of his four children, each mentioned in his will, educated and accomplished, chose to emigrate while his widow returned to Coleraine, where she died in 1934. Lilith Blanche, whose name is engraved on her father’s tombstone in Prospect Hill, was one of the first Catholic women to graduate from Trinity College Dublin with a Masters Degree, and she moved to Arizona where she married and bore one daughter, Sheila Mary Bate before her own sudden death in 1918.

Fritz, or Frederick, became an engineer and emigrated to Canada, as did his sister Cecilia with her husband Henry Gerrard. Charles chose the life of a seaman, perhaps sharing his father’s love of exploring new cultures. So his offspring, far away from his home countries of Germany and Ireland, are perhaps Steinberger’s greatest legacy, beyond the small photograph gracing the Arts Millennium Building in NUIG, formerly UCG.

I would like to thank Damien Quinn, Military Historian, for his moral support in writing this article, which has been a long-time endeavour, and the caretaker of the cemetery at Bohermore for helping me find Valentine’s grave many years ago, so I could lay a wreath for a fellow German who had made Galway his home.