Appearing in the opening sequence of the beloved comedy series Fr Ted, on the foreshore of Craggy Island, the world famous Plassey Shipwreck is definitely one of Inis Oirr's must see locations. But are you familiar with the story of how the steam trawler found its way on to the land?

Originally built as HMS (Her Majesty's Ship ) Juliet in 1940, a Shakespearian-class naval trawler of the Royal Navy at the start of World War II, it served as a minesweeper until November 1942 when it took part in Operation Torch - the Allied landings in French North Africa. It was sold into merchant service at the end of the conflict as Peterjon. In 1951, it was acquired by the Limerick Steamship Company and renamed Plassey after the Plassey area near Limerick.

Back in March 1960, Captain Thomas Wilson set off on its journey, carrying whiskey, stained glass, and yarn for the Irish Merchant Service, onboard the Plassey.

On its way from Kerry to Galway, a severe storm struck the ship into Galway Bay, the well-travelled cargo vessel finally crashed into Finnis Rock in the early hours of the morning, off the cost of Inis Oirr.

Thanks to the islanders’ courage and bravery, the entire crew of 11 was brought to shore safely using Breeches Buoy to hoist them in, one man at a time. Several weeks later, at the tail end of a hurricane, the 53m length and 600-tonne ship was lifted off the rock and onto the island's shore. 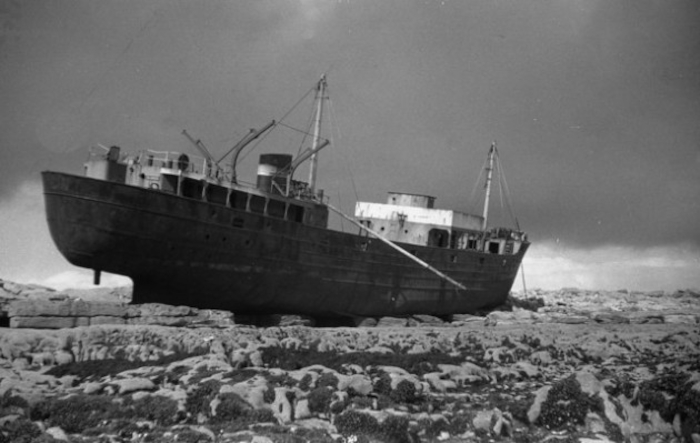 The Plassey as it looked in 1962. Source Harold Strong.

The islanders salvaged what they could from the battering sea including many goods that had never been seen before on the island such as biscuits, cookies, and even modern day toilets. Various parts of the ship were taken home as souvenirs and 60 years later, the remains are a powerful reminder to the Aran Islanders of the power of the sea.

The Plassey Shipwreck is located on the eastern side of Inis Oírr. After departing the ferry you can walk to the left at the end of the pier to reach the shipwreck. It is about a 45 minute walk from the pier.