THIS WAS originally a Steven Spielberg project a decade ago. He had a personal interest in the story and asked writer Aaron Sorkin for a screenplay.

Sorkin, the man who wrote The West Wing and The Social Network, has a good ear for political and historical dramas, but when Spielberg’s schedule filled up, Sorkin himself ended up directing. This is a fascinating story, but the film does not do the best job in explaining the events leading up to the trial.

The Chicago 7 were arrested at a massive protest outside the Democratic convention in Chicago 1968. They were mostly unrelated to each other and were a cross section of hippies, suburban protestors, and college students. The film is about the trail they endured which went on for months and captured the interest of the country. “The whole world is watching” was chanted outside the courtroom day after day.

Unfortunately there was a lack of context, this trial was the end of a decade of protests, it was the conclusion of years and years of tension, yet the film did not quite capture the gravity of the situation. While I did learn a lot about the actual case, this case was not limited to the courtroom - it was a global event.

'It hits all the tropes you look for - rousing speeches, real life newsreel montages, and earnest testimonies about nebulous topics like “America” and “freedom”'

For example, the march in Grant Park, where the seven were arrested, had 50,000 people there. The film makes it look like a few bus loads. Sorkin's script is sharp at times, but also clunky, his dialogue never really ringing true. You know when you play back a conversation in your mind and think “This is what I wish I said”? In Sorkin's world everyone says what they wish they said and it sounds a little prepared. 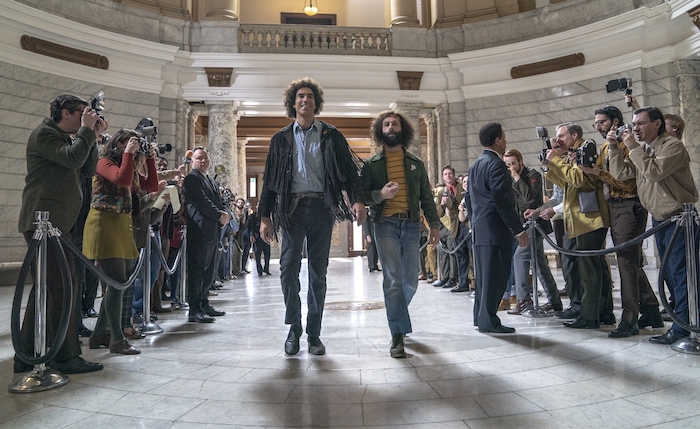 Yet, this is still an enjoyable courtroom drama. Of course it is - it comes from the man who brought us the definitive modern courtroom drama, A Few Good Men. It hits all the tropes you look for - rousing speeches (that no judge would allow ), real life newsreel montages, and earnest (sometimes cringe ) testimonies about nebulous topics like “America” and “freedom”.

If you go with it, it is good fun. The performances are excellent, bar a few unusual accents. The majority of the cast is British which was a strange decision. The eye-catching performance is Sacha Baron Cohen as Abbie Hoffman, but he is still only OK here.

One of the more enjoyable aspects of this film was the Wikipedia deep dive after watching. Looking up the real events and the real people was fascinating and makes you wonder, would this have been better as a mini-series where you could really hash out both the people and the time? There isn’t a huge amount of new releases coming our way right now and this is a big Hollywood film with a great cast and well known director. You could do a lot worse.