An investigation into an air crash at Craughwell two years ago has concluded that the probable cause was a collision with a tree as a result of a loss of lift and stall during an attempted go-around from a rejected landing.

A contributory cause of the incident was that the aircraft was high and fast on its approach to the runway, landed long and bounced.

The flight from Dublin to the Galway Races in August 2018 had been purchased at a charity auction by one of the passengers, who the report states, had initially assumed it would have been on a jet or a helicopter.

The Cessna F172P aircraft, with one pilot and two passengers on board, had just flown from Weston Airport, Co. Dublin, to Craughwell Airfield, Co. Galway, where the landing on Runway 34 was fast and long. 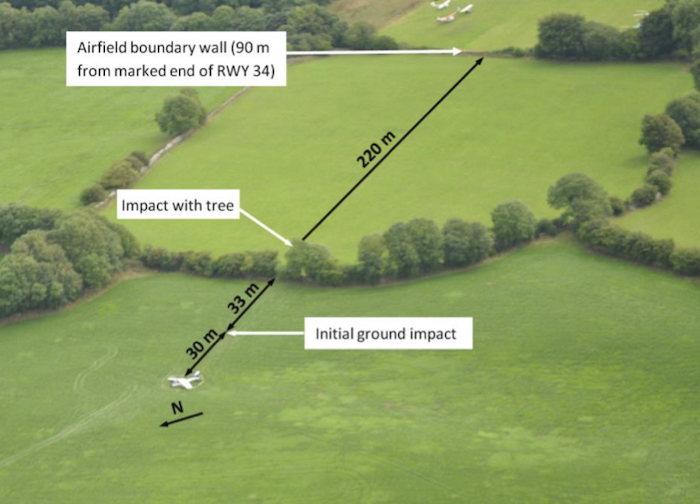 Upon realising that there was a stone wall located just beyond the end of the runway at the airfield boundary, and that the aircraft was not going to stop in the distance remaining, the pilot applied engine power and took-off again. The aircraft marginally cleared the boundary wall, briefly climbed and travelled over the field immediately beyond the boundary wall.

It then lost altitude, drifted left, and struck a tree at the far boundary of the field, before impacting with the ground and coming to rest. The three occupants evacuated the aircraft with some difficulty and the emergency services brought them to hospital for assessment. There was no fire.

The trip to bring two passengers from Dublin to a horse-racing event in Galway had been funded by a private company, for sale at a fundraising auction. One of the two passengers had successfully bid for the trip, part of which was to fly the two passengers to Co. Galway by fixed-wing aircraft. It was initially intended that the aircraft would fly to the main airport in Galway (EICM ).

However, the pilot subsequently realised that EICM was closed for such flights, and a number of days prior to the flight, he decided to operate to Craughwell Airfield – a private grass strip, also in Co. Galway. He had not flown to that airfield before. The pilot had arranged that following the aircraft’s arrival at Craughwell, the passengers would be flown by helicopter to Ballybrit Racecourse, in Co. Galway.

The pilot informed the Investigation that he arrived at Weston Airport (EIWT ) at approximately 08.30 hrs on the morning of the accident, checked the weather for the flight, and completed a weight and balance calculation. He then contacted Craughwell Airfield to obtain prior permission to land at the airfield. He was informed that a ‘fly-in5’ was taking place at the airfield that day.

The pilot was joined by his two passengers at approximately 10.00 hrs and he discussed the flight with them. According to the pilot, the passengers were given a safety briefing at the aircraft. One passenger sat in the right-hand seat beside the pilot (Passenger No. 1 ) and the second passenger sat in one of the rear seats (Passenger No. 2 ). The pilot informed the Investigation that when both passengers were seated, he ensured that their seat belts were fastened.

Approach was fast and high 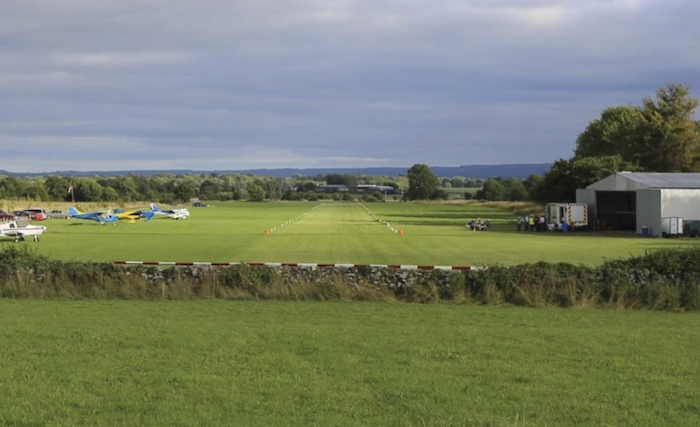 The aircraft took-off from EIWT at approximately 10.30 hrs and proceeded west under Visual Flight Rules at an altitude of 1,500 ft. The pilot indicated that the en route weather conditions were benign and that there was good visibility throughout the flight. The pilot stated that on arriving overhead Craughwell Airfield, he proceeded to join a left-hand downwind (positioning leg ) for Runway (RWY ) 34. According to the pilot, the aircraft’s approach was fast and high.

The aircraft landed long and bounced before touching down again. The pilot noticed a stone wall just beyond the end of the runway at the airfield boundary and realised that the aircraft was not going to stop safely in the distance remaining. He immediately applied full power and the aircraft took-off again, marginally clearing the 1.7 m high stone wall.

The aircraft climbed briefly and travelled over the field immediately beyond the boundary wall, but then sank, drifted left, and struck a tree situated in a line of trees at the far boundary of the field. The aircraft impacted the ground in the next field, and travelled for approximately 30 m before coming to rest (Photo No. 1 ). The three occupants evacuated the aircraft with some difficulty and were brought to hospital by the emergency services, for assessment. There was no fire.

The pilot said that the trip had been planned for a ‘few weeks’ and because EICM was closed, he had intended to fly to Connemara Airport (EICA ), at Inverin, Co. Galway, but a number of days prior to the accident flight, he became aware of Craughwell Airfield and elected to fly to there instead.

The pilot initially thought that he touched down about ‘three hundred feet into the runway’, before subsequently estimating that it was ‘prior the mid-point’ of the runway, followed by a bounce and float. He said that the aircraft ‘skipped across, still carrying too much speed’ and at this point he saw the boundary wall and realised that the aircraft wasn’t going to stop before reaching it.

He said he noticed a large tree at his 12 o’clock position and ‘attempted to raise the nose and try a slight turn to the right’ and recalled that at this point, he heard the stall warning. He said he clipped the tree and that reduced any forward speed he had and the aircraft started to descend, but that he tried to maintain wings level and ‘make a landing’. He said the aircraft landed quite hard, but that it wasn’t a ‘hugely abrupt landing’ as the aircraft still had forward velocity. He said [that when the aircraft came to rest] he checked that his occupants were ok, turned off the ignition, made sure that there was no fuel leaking, and that there was no sign of any fire. The pilot said that his door was jammed, and the three occupants exited the aircraft through the door on the right-hand side.

Passenger No. 1 said he had attended a fundraising event, where there was a charity auction, and one of the prizes to bid for was a trip to the Galway Races. He said his colleague, the other passenger (Passenger No. 2 ), won the bid. He originally thought the flight would be in a ‘jet’ and helicopter. He said that he received a telephone call and emails from a company that seemed to be involved with the prize, and that the first time he spoke to the pilot was on the night before the flight. He said he had never flown in an aircraft that small before and that when he met the pilot before the flight, the pilot was very good at reassuring him and the pilot was ‘very good throughout the journey’.

All three persons were brought to hospital by the emergency services for assessment following the accident. The aircraft was damaged beyond economic repair. The report concluded that the probable cause was the collision with a tree as a result of a loss of lift and stall during an attempted go-around from a rejected landing. It added that a contributory causes was that the aircraft was high and fast on its approach to the runway, landed long and bounced. A secondary contributory causes was the degraded climb performance as a result of a high angle of attack; reducing ground effect; and carb heat remaining in the ON position.