The artwork, entitled We Are All Navigators, was commissioned by the GIAF, feature's the Festival Big Top and Olivier Grossetête’s The People Build project from the 2018 festival, and which recalled the once existent Galway to Clifden railway. Overall it celebrates recent festivals and looks forward to the future.\

The impact of the arts festival

“The arts festival had a huge impact on me growing up," says Jennifer, "with the colour and joy it brought to the city each year. One of the first events that sticks out was when Gulliver washed up at Grattan Beach.

'Jennifer has captured a beautiful sense of the festival' - Paul Fahy, GIAF

"It is a huge honour to be considered to design a poster for this year’s Festival, and hugely uplifting to have someone put their faith in you in these incredibly uncertain times. Art seeks to make sense of everything; it helps us to process and come to terms with the things in life that we can’t really control and can’t really explain.” 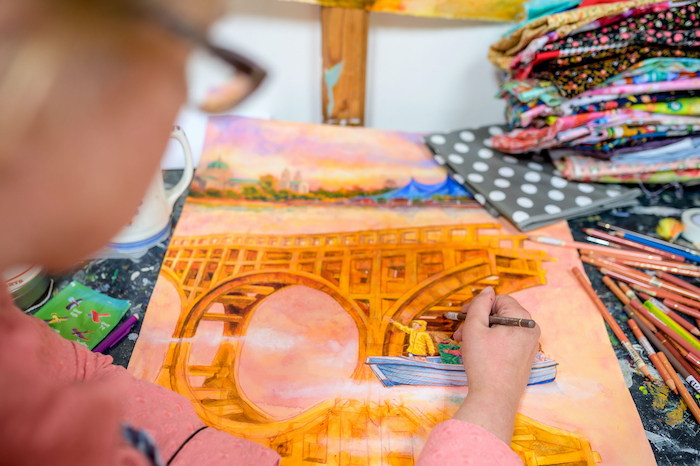 GIAF’s artistic director Paul Fahy said the festival was delighted to be working with Jennifer, who he called "one of Galway’s most unique and original artists". He praised the poster saying it "captured a beautiful sense of the festival".

A limited edition first run of 100 posters has now been released for sale. It measures 540mm x 850mm and is available framed (€80 ), unframed (€40 ), and can be shipped worldwide. It is available at the Festival Gallery on William Street (open Wednesdays to Sundays until September 26 ) and via GIAF.ie