CHARLIE KAUFMAN, the man who brought us Being John Malkovich and Eternal Sunshine Of The Spotless Mind, has written some of the finest films of this century - and he does not release films often.

His last two films were commercial disappointments so, like a lot of directors, he has fled the traditional studios to go to Netflix with their open cheque book and hands off approach to producing. However leaving the director relatively unchecked both artistically and financially, has earned 'Netflix originals’ some criticism.

I loved The Irishman but if a producer had insisted Scoresese cut it down by 40 minutes it would have been a bigger hit. The same goes for Spike Lee's Da Five Bloods. Both were a little self indulgent.

I’m Thinking Of Ending Things is just over two hours and is certainly not for everyone. It might be Kaufman's least accessible movie yet. It is virtually impenetrable for the first hour and a half but the pay-off is entirely worth it. On a second watch everything was a lot clearer, even the title takes on a new meaning.

Jessie Buckley is introduced as Lucy (her name changes throughout the film ). She is on her way to meet her boyfriend, Jake's, parents for the first time on their farm. On the long drive we hear her think via voice over, 'I’m thinking of ending things' immediately Jake looks at her as if he heard her. Things are strange in the car and get stranger when they get to the farm. 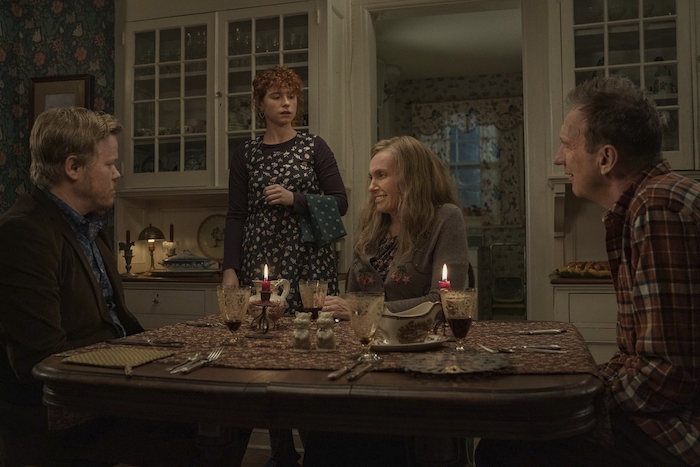 From this point the film shifts genres, from horror to comedy to musical, and even an animated section. The performances are why such a difficult film works. Jesse Plemons (Jake ) is, as always, excellent and understated. The star performance however is our own Jessie Buckley.

'Like everything Kaufman has done, it is self indulgent, but it worked for me because I am interested in what he has to say'

She gets to flex all her talents here, and dance, and really show off. The movie would not work without her and I cannot think of another actor who would be able to pull it off - particularly when she mimics Pauline Kael and recites her review of A Woman Under The Influence verbatim.

I watched this late at night, alone, and was so moved by the last 45 minutes I went back and watched the last half again immediately. Like everything Kaufman has done, it is self indulgent, but it worked for me because I am interested in what he has to say. He gets a lot ou about loneliness, suicide, and the passing of time.

After the year we have had, I do not think this movie made me feel better about any of those things - but it does feel like the perfect film for what we are enduring. It is a heavy and dense film and if you are up doing some work there is a lot to take from it. I think it will probably end up being my film of the year but I can see it being some peoples worst. Sounds about right for 2020.