WELL THIS is a treat. A new Spike Lee movie on Netflix. The titular five bloods are a group of Black GIs who return to Vietnam to take back the remains of their commanding officer, Stormin' Norman, and the gold they buried with him years ago.

It begins as a loose and fun adventure movie, but slowly turns into something else - more The Treasure Of Sierra Madre than Apocalypse Now. One thing I love about this, during the flashbacks to Vietnam, Spike does not use the de-aging technology Martin Scorsese used in The Irishman (with mixed results ). This might sound silly but we know we’re watching a movie right? We can handle people not looking the exact right age.

The best part of Da 5 Bloods is by far the lead performance from Delroy Lindo as Paul, He is a great actor who has not always received the roles he deserves. Physically huge, he is a MAGA hat wearing, immigrant hating, man who is clearly still waging a more complicated war in his head. He wants to belong to a country that does not accept him. A country he fought for. His PTSD and ghosts haunt him every step.

We see this literally with the ghost of his former commander showing up and counselling him several times. This is funny given all the talk earlier in the pandemic of Shakespeare's writing King Lear during his lockdown. Paul's slow turn to madness reminded me of Lear, his heart of darkness is exposed twice directly to the camera. 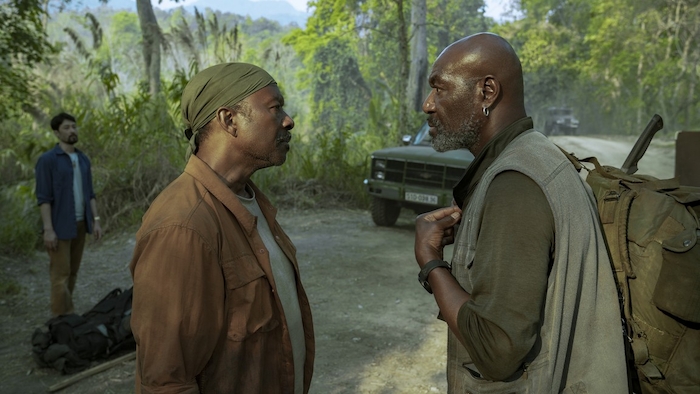 The fourth wall is not broken here, but shattered. Lindo looks at you the viewer and blasts two searing soliloquies. Those scenes alone are worth the price of your ticket (or your Netflix monthly subscription in this case here ). The Marvin Gaye soundtrack could be a little on the nose but it isn’t.

Like Blackkklansman, Spike mixes in news footage from both the past and present the way only he can, as a master of collage. The film preaches but does not come off preachy. It is a history lesson, a wake up call, and a really enjoyable film all in one.