“It is always difficult to explain the point of sport to those who do not like it. Non-aficionados will never be persuaded to take pleasure from ball skill or pace. But the level at which sport can be understood by anyone is as a story: as a narrative which must build to a decisive climax and in which character is revealed through actions.”

Two sentences written by Mark Lawson in The Guardian which probably sum up the beauty of sport and why so many of us adore it. Sport for many of us, whether playing or watching, provides us with an outlet at the end of a working week; it gives us an opportunity to make new friends; a chance meet up at the pub and talk about wider issues in our lives. However, with the coronavirus resulting in a postponement of all sports, for many sport lovers, including myself, we are at a loose end.

But never fear, because from despair, hope will always spring eternally and at the advertiser.ie we have come up with some sports documentaries to keep you enthralled over the next few weeks and months.

To start us off is arguably the Godfather of all sporting documentaries Living With Lions. In 1997, directors Fred Rees and Duncan Humphreys approached the men in suits who ran the British and Irish Lions with an idea that they had concocted over a pint in the Star & Garter pub on Poland Street in London - to make a film about the 1997 Lions’ tour to World Champions, South Africa. It was the first time the famous rugby tour was to be documented and all the pair had to do was pay £30,000 for the privilege and what the two produced was something special.

What makes Living With Lions so great is that it is a true fly on the wall documentary. All scenes shot are real. Nothing is staged. Players provide a truly honest description of their experiences on tour. Something which is rarely captured in modern sports documentaries because the PR and communications department would be lurking round every corner to make sure the sports stars did not say anything minutely controversial.

So raw is the footage that one of the most iconic speeches in sporting history by Lions forwards coach, Jim Telfer, to his players on the morning of the first Test with South Africa, was only filmed because the soundman Dave Brill told the directors the Scotsman "was off on one" as he was mumbling and grumbling to himself.

There are tour ending injuries to Doddie Weir and Rob Howley, wild nights out with players with former Ireland captain Keith Wood doing shots out of a waitress' belly button, and the harrowing cries of Will Greenwood's mother as she sees her son on a stretcher after a horror tackle left him unconscious and swallowing his tongue.

Quite simply put - if you love sport, then you must see this documentary.

Sunderland 'Till I Die (Netflix )

So good was the first season of Sunderland 'Till I Die, Netflix decided to commission a second season. The season follows the fortunes (or rather misfortunes ) of one of England's best supported club, Sunderland, which finds itself in the third tier. The documentary takes us around the inner workings of the club, from the ladies who sell tickets to fans at the club reception, the chefs in the kitchen, to the upper echelons of the club, where the chairman makes big decisions on whom to sign and who to get rid of.

We experience the sheer passion of the fans who adore the red and whites stripes of The Black Cats, the highs and the lows of the players who are want to move up in the world, and the importance of what a major club in England does for its local city's pride and employment figures.

Sunderland 'Till I Die breaks the mould of most sporting documentaries as it highlights the woes of a sporting organisation as opposed to the glitz, glamour, and glory of one of the more successful teams.

The first season was a great watch and I can't wait to see the next instalment.

I have to warn readers about my next choice. I watched it during a 10 hour layover in probably the most boring airport in America so anything to pass the time and distract me would have seemed entertaining. However, what I can confirm is that I had zilch interest in boxing before I watched All Access: Wilder Vs Fury (Epilogue ) and now I have because Showtime was able to appeal to my passion for sports in this piece.

Even if you are not the biggest sports fan, it is unlikely that you missed the promoting of the rematch Deontay Wilder versus Tyson Fury for the WBC Heavyweight title. The second fight was rumoured to the be the biggest heavyweight contest in 20 years and the speed at which the tickets were snapped up and the number of pay-per-view subscriptions suggest that the billing was right.

However, to have a rematch there must be a prelude and Showtime Sports' All Access: Wilder Vs Fury (Epilogue ) captures brilliantly the intensity and drama to the first bout. Less than half an hour in length (perfect for a lunch break ), the mini-documentary takes us through the final week's preparations before the fight, including training and promotions. There are interviews with the boxers' teams and family members who talk about the challenges and fears of seeing their loved ones going into the ring and being battered by another man.

And of course, there is the fight itself. A 12 round epic which sees Fury produce a stunning performance despite being knocked down by the Bronze Bomber, the hardest hitting heavyweight of all time.

Too Good To Go Down (BT Sport Films )

Supporters of The Red Devils may be pining for the glory days as they see their side "struggling" in fifth place and going through a decade of mediocrity after the domination of the Ferguson era. However, tough as it can be to imagine, Manchester United were a lot worse off in the 70s when they were relegated in 1974 thanks to a strike by old boy Denis Law (although he contends they were already gone ) for rivals Man City.

BT Sport Film's documentary Too Good To Go Down chronicles the downfall of a Man United side who lifted the European Cup six seasons earlier at Wembley with interviews from past players and managers. It gives a wonderful insight to how aspects of life or any business can go pear shaped if we rest on our laurels.

If you are a United supporter then it will give you a nice bit of perspective of how bad things can get and if you despise the Old Trafford outfit, like I do, then it is great to see them suffer, no matter the year. 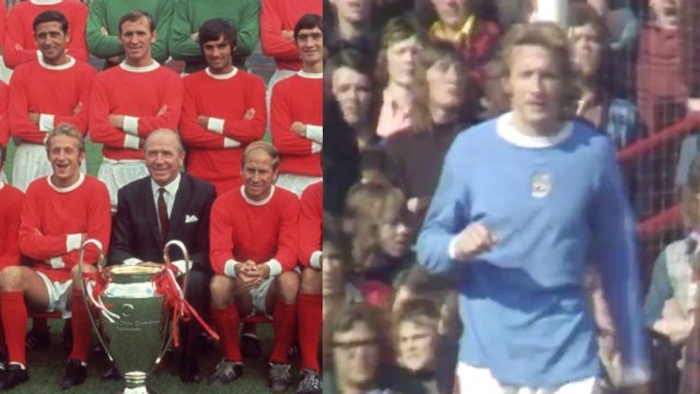 Gone from the big time for far too long, Leeds United is a lumbering giant which has hung around the lower leagues for far too long; 16 years in fact; and with one of the most storied histories of any English football club and a massive fanbase to boot, making a documentary about the club's trials and tribulations was a no brainer for Amazon.

Take Us Home: Leeds United takes us through the Yorkshire side's journey throughout the 2018/19 season where they have appointed brilliant tactician Marcelo Bielsa to guide them back to the promised land; the Premier League.

What I really enjoy about the six part series is not only do we get to have a look behind the scenes at the runnings of the club, there is a huge amount of air time given to local fans; ordinary people like you and me who adore their club and follow them to the ends of the earth. A feeling which resonates with my inner sports nut.

And in a time when we are having to work with each other for the greater good; Leeds' song 'Marching on together' seems very apt for this period in which we find ourselves.

All or Nothing: The Philadelphia Eagles (Amazon Prime Video )

Now I wouldn't be the biggest NFL fan in the world, but if I were to choose a side to follow it would be the Philadelphia Eagles. Why? Because the Eagles were the first team I saw play live and I have family over in Philly and like every Philadelphian, they are fanatical about their team.

This is the fifth instalment of Amazon's All or Nothing series following a NFL side and having watched the Arizona Cardinals series, I can say I wasn't dying to watch this, however, as a small Eagles supporter I gave it a shot in the hope I might see one of my cousins - I didn't. However, I found the eight part series rather interesting and enjoyable. Why? Because, unlike other sports documentaries on American teams, there was a real involvement from local supporters who voiced their true opinions about their heroes and who aren't afraid to say that a performance isn't good enough if they believe it to be so.

My final recommendation is a bit of a paradox really. It is an ok documentary which details Diego Maradona's management over Mexican second division strugglers Dorados de Sinaloa. But what I thoroughly enjoyed about the series is Maradona's sheer and utter passion for sport.

He might be a tub of man who can barely walk because of his knees but his passion and desire for football burns as brightly as it ever did. There is comedy, explosions of anger, tantrums, tears, and everything else you can think of as the self proclaimed 'Hand of God' does his best to coach and coax his team of under achievers to something greater than what they really are.

And if that doesn't perk your interest, it is Diego Maradona in Culiacán - what could possibly go wrong?

So there you have it. Seven sports documentaries to give you that sporting hit while our beloved pastime is on hiatus.