UNTITLED, UNLESS Otherwise Stated – A Retrospective, an exhibition by Laura Vechhi Ford, will feature paintings from across the last six decades, with a particular emphasis on her works in the 2010s.

The exhibition is part of Kenny's Bookshop & Art Gallery’s 80th Anniversary celebrations and the Galway 2020 European Capital of Culture calendar of events. The official opening will take place in The Kenny Gallery, Liosbán, tomorrow at 6pm. The guest speaker will be historian Gearóid Ó Tuathaigh. A collection of poetry by Vechhi Ford, also entitled Untitled, Unless Otherwise Stated – A Retrospective, will also be launched on the night. 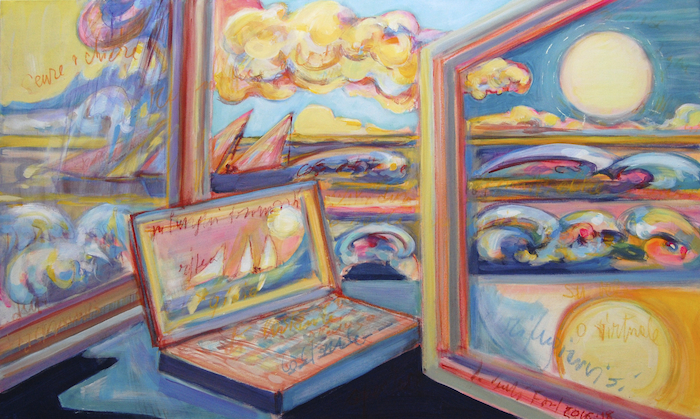 Throughout her work are abiding symbolic motifs, such as birds taking flight, fish leaping, cars, or the moon, as well as the use of text in landscape, still-life, and portraits - of particular note are the portraits of Umberto Eco who she knew in Italy, friend and campaigner Margaretta D’Arcy, fellow artist Sean McSweeney, and musician Micky Finn.

Born in Italy in 1939, Vecchi Ford studied art at the Brera Academy in Milan and had her first solo exhibition in 1967. In the late sixties she came to the attention of the Venice based patron of the arts, Peggy Guggenheim, and then moved to Galway to teach in the Italian Department of UCG. Though pursuing a career in teaching, visual art has remained central in her life.

The exhibition runs until April 2. Gallery opening times are Mondays to Saturdays, 9am to 5pm. See www.thekennygallery.ie